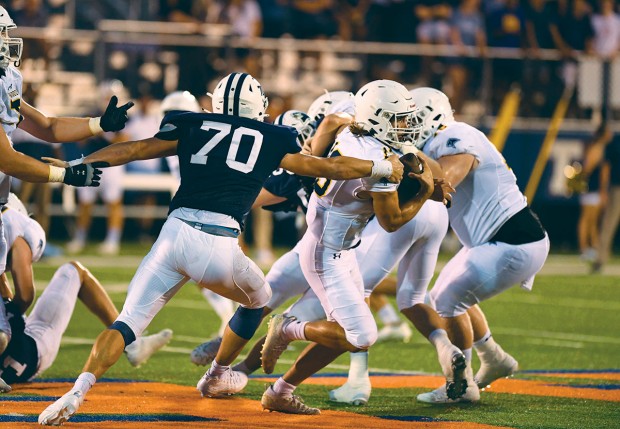 IRONMAN Second Baptist Eagle John Dearing (#70) breaks through to take down the ball carrier in the Eagles game against Prestonwood. Dearing is on the field for every play of the entire game as both an offensive and defensive lineman for the Eagles.

With the unexpected departure of long-time head coach Terry Pirtle just seven weeks before the start of the football season, the Second Baptist Eagles had big shoes to fill in a short amount of time. Fortunately for the Eagles, former University of Houston head football coach Tony Levine stepped in to fill the void. “I became part of Coach Pirtle’s staff last year as a volunteer assistant when my son joined the varsity [team] as a wide receiver and special teams player, which was a lot of fun,” said Levine. “We had a great season and our team made it all the way to the state finals in TAPPS Division II. So, when Coach Pirtle took the athletic director’s position at Houston Christian this summer, our athletic director Mike Walker met with all our coaches and the last thing they wanted to do was start from scratch by bringing in a new coach with a new system at the very last minute.”

It was at that point that the head coaching role was offered to Levine, which he accepted on an interim role for this season only on a volunteer basis. “We still have our family-owned restaurant in Missouri City, so working the business for much of the day and then driving across town mid-afternoon for football practice is pretty exhausting. Still, I know the season is going to fly by and I’m really enjoying the role,” added Levine.

Making the job even more enjoyable for Levine is the return of several key players from last year’s state finalists including standout quarterback Turner Murdock. Murdock, who also was a pitching ace for the Eagles state championship baseball team, is considered one of the state’s top private school quarterbacks. “Turner’s definitely a big recruit for the class of 2024,” said Levine. 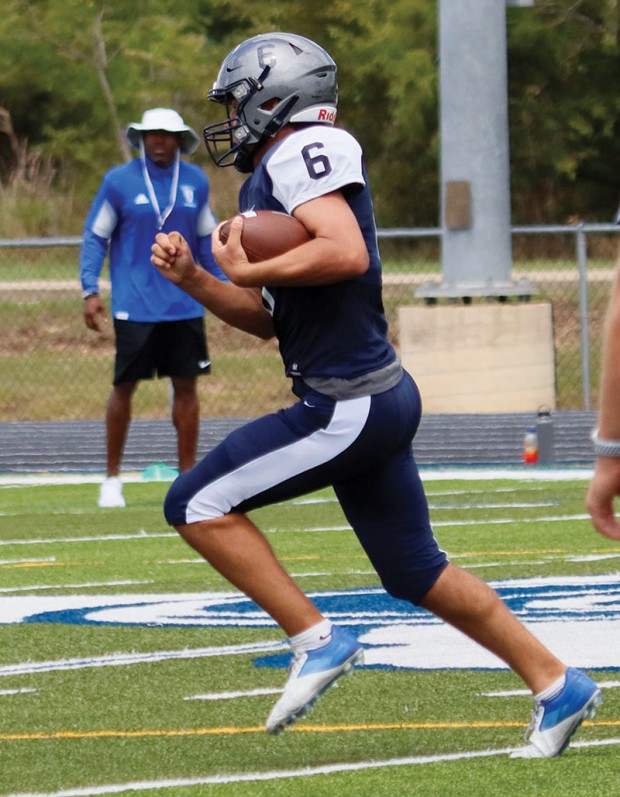 RECORD BREAKER Senior running back and linebacker Josh Costa is one of just two returning starters for The Emery/Weiner School Jaguars. Costa broke a school record with 285 rushing yards in the Jaguars season opening victory.

With a 42-24 victory over Dallas’s Lakehill Prep, defending six-man state champion Emery/Weiner entered the season in victorious fashion under first-year head coach Sam Castello. “The transition has been pretty smooth,” said Castello, who was the Jaguars’ assistant head coach last season. “Even though we graduated 15 of our 18 players from the state championship team, we have a lot of guys who are stepping up to the challenge.” On the flip side, Castello welcomes the return of a pair of standouts from last year’s team including running back and linebacker Josh Costa as well as center and defensive end Ari Strauss.

In the season opening win over Lakehill Prep, Costa rushed for a school record 285 yards while also scoring three touchdowns. As for the varsity newcomers, Castello expects good things from junior quarterback Ben Zadok as well as wide receiver and junior captain Zac Laviage. “We have some unknowns with all the new guys but with two of the last three state championships in TAPPS Division 1 there’s also great tradition to build on here,” added Castello. 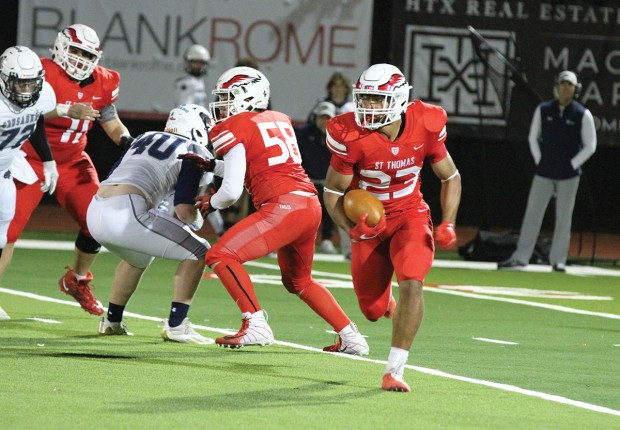 OFF AND RUNNING St. Thomas Eagles running back Johann Cardenas is a driving force behind the Eagles offensive attack this season. Cardenas has received multiple offers to play major college football.

Behind a sensational night from quarterback Donte Lewis, the St. Thomas Eagles kicked off the football season with a 43-27 victory over the St. John’s Mavericks. Lewis, who transferred to St. Thomas this season, threw for 399 yards and a lofty six touchdowns. “Donte is quite dynamic when he gets the football in his hands,” said Eagles head coach Rich McGuire. “He’s also a great baseball pitcher with a fastball that reaches 93 MPH.”

On the ground, the driving force for the Eagles is the return of running back Johann Cardenas. Cardenas, who rushed for 200 yards in the win over St. John’s, has already received offers to play college football from multiple Power-5 Conferences. “He’s kind of what we center our offense around,” said McGuire.

Even so, McGuire says the Eagles defense could be the team’s biggest strength, led by the return of all-state defensive backs Caleb Davis and Marquis Kiatta. In addition, the Eagles boast a solid group of linebackers led by all-state player Zach Rocha as well as returning starters Tyler Day and Jack Keeler.