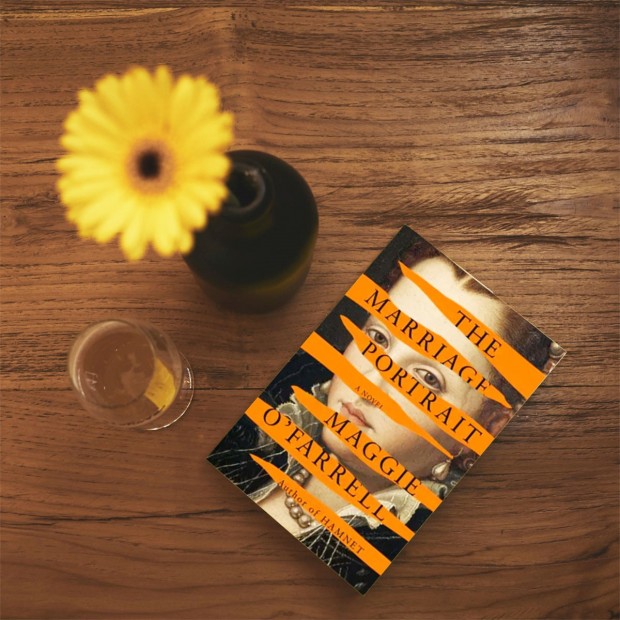 Author Maggie O'Farrell is coming to Houston through Inprint later this fall.

Houston’s literary community is so vibrant, and one of the standouts is Inprint. I enjoy attending events that are part of the Margarett Root Brown Reading Series, and the 2022-2023 season’s lineup is stellar. Season ticket sales end soon, but single tickets are available close in time to each event. Recently, I interviewed Executive Director Rich Levy about Inprint:

Tell me a little bit about Inprint and your role there.

I joined Inprint as Executive Director in August of 1995. Back then, I was the only full-time staff member, and the organization had a local focus. Now celebrating its 40th anniversary, Inprint serves 15,000 people annually, has a hardworking staff of seven, and has helped transform the city into a thriving literary metropolis where creativity is celebrated, and Houstonians come together to engage with the written word in so many dynamic and innovative ways.

How did it get started?

Inprint was founded in 1983 by a group of community leaders who sought to address a need in Houston for greater support and appreciation for the literary arts. The Inprint Margarett Root Brown Reading Series, however, was launched in 1980, originally as the Houston Reading Series, by the UH Creative Writing Program (UH CWP). Inprint, which had been quietly assisting the series since its inception, engineered the name change in 1991, thanks to the extraordinary support of The Brown Foundation, and took over management and administration of it in 1999.

Since then, every reading in the Inprint Margarett Root Brown Reading Series has been a unique literary adventure. Now in its 42nd season, the series has featured more than 400 writers from 38 countries, including winners of 12 Nobel Prizes, 70 Pulitzer Prizes, 65 National Book Awards, 54 National Book Critics Circle Awards, and 17 Booker Prizes, as well as 21 U.S. Poet Laureates.

How do you decide which authors to invite?

Each spring, we meet with many of the major U.S. publishers about the exciting new books that will be released in the upcoming year. After further research and reading, we develop and curate an inclusive array of speakers whose work is stimulating, engaging, and fused to the zeitgeist of the current moment.

Here at Inprint we believe everyone has a story to tell, so we strive to put together a lineup of diverse voices and styles. It is our pleasure to share the literary riches of our 2022-2023 season, featuring 11 world-renowned authors originally from China, Ethiopia, Ireland, Korea, El Salvador, Pakistan, Tanzania, First Nations, and the United States. What a thrill to be returning to the theatre for the first time in more than two years!

Do you have to subscribe to the entire season or can you buy individual tickets for a particular author?

Season subscriptions for the 2022-2023 Inprint Margarett Root Brown Reading Series are on sale now and include signed books, reserved section seating, free parking, online rebroadcast access, and other benefits. $5 general admission tickets, which have been the same price since 1980, will also be available a few weeks in advance of each reading on the Inprint website. 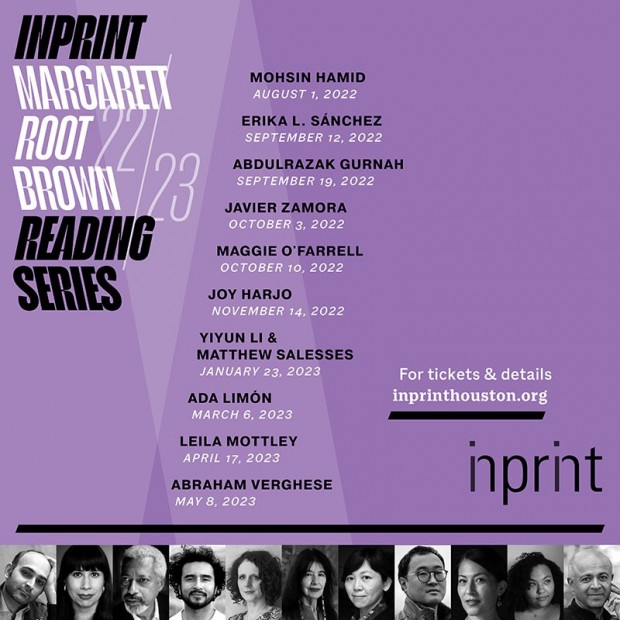 The Inprint Margarett Root Brown Reading Series seeks to make the world’s leading writers accessible to audiences in Houston and beyond. In any other city, meeting one of your favorite authors at an event held in a major theatrical venue would likely cost $30-$50 per ticket. In Houston, Inprint makes it possible to meet winners of the Nobel Prize, Pulitzer Prize, National Book Award, and more for just $5 – the same general admission price since 1980, when the series was founded! And season subscribers receive an incomparable set of perks.

Students and seniors are admitted to our events free of charge (another distinction), and visiting authors give craft talks at the UH CWP and outreach readings at Texas Southern University, Houston Community College, UH-Downtown, and other educational venues. Readings are held at the city’s leading performing arts venues in central Houston, and both in-person and virtual attendance options are available. And many of the readings are eventually housed in our online Inprint Archive of Readings, which provides an ongoing resource to readers, writers, and students.

You’ll find information, tickets, and much more on our website. We invite you to join us!