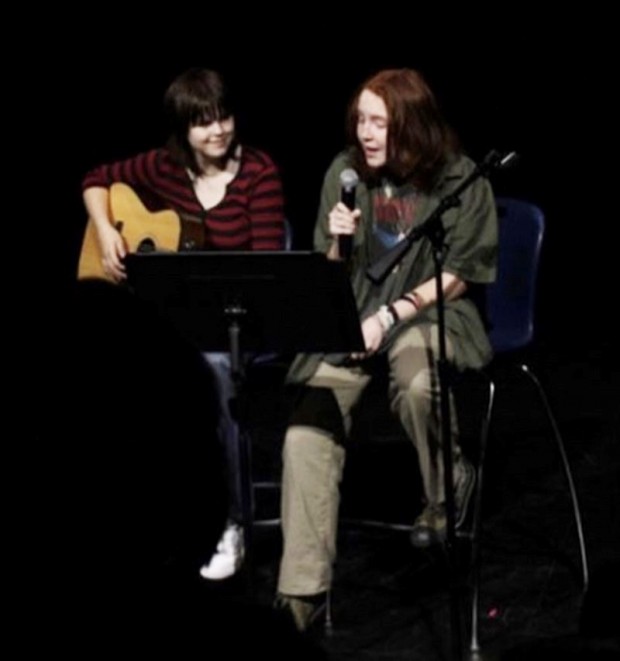 Duo Jasper Hardaker and Mikey Harper (from left) singing at the Creative Writing Department Back to School Performance.

With the fresh start of school for HSPVA in the 2022-2023 school year, new expectations and excitement have risen once again. As a performing and arts school, HSPVA stands out in Houston with its creative expressions and an incredibly involved student body. Recently, the Creative Writing Department hosted their very first Back-to-School Reading.

There are many exhibitions and events in HSPVA, such as the Diversity Series. The Diversity Series is a celebration and commemoration of different cultures and heritages for each month that it represents, such as Black History Month or Hispanic Heritage Month. There are booths with food from respective cultures, performances with spoken word poetry, songs, orchestral performances, dances, and memorably even martial arts and kung fu shows.

Other departments often host events to showcase students' work. The Theater Department puts on plays, while the Visual Arts Department has galleries to showcase its pieces.

The Creative Writing Department added a new show of their own to their list on Sept. 22 in an effort to bring a more theatrical and public flair to their studies. Dubbed the “Back-to-School” Performance, it featured pieces that were each four minutes or less by sophomores, juniors, and seniors within the writing department, with an application form to ensure a high quality time.

Even before the day of the event, everyone involved was busy as they practiced their pieces. On the day of the actual event, the sophomores rehearsed and did a practice run of their performance right after the end of school, followed by the juniors and seniors.  When the show finally started, it was an amazing experience.

Most of the writing department showed up, either as audience members or as performers. There were students from other departments, parents, and other friends as well. The energy was through the roof. Poetry, short stories, and even some songs were performed, both solos and in groups of two or more.

When asked if they would like to do it again, the response from those involved was a resounding yes.

JJ Legrand, a sophomore who performed on stage added, “For something that was started this year, it went really well. I’m looking forward to participating again whenever it pops up, and I know others are too!"

The Back-to-School Performance was a resounding success that will surely become a new tradition within the HSPVA Creative Writing Department.