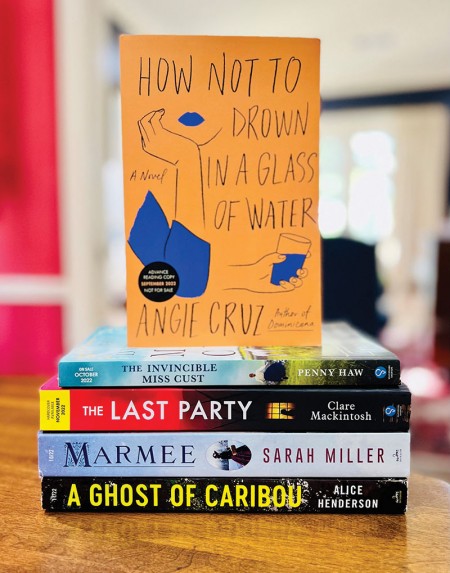 WHAT TO READ This month's picks include two thrillers, two historical-fiction titles, and a contemporary tale relayed in a unique format. (Photo: Cindy Burnett)

A Ghost of Caribou by Alice Henderson (mystery/thriller) – In A Ghost of Caribou, Alex Carter, a wildlife biologist, is sent to northern Washington state where a mountain caribou is believed to have been seen for the first time in decades. This would be monumental, because the animal is believed to be extinct in the lower United States. Alex is hired by the Land Trust for Wildlife Conservation to investigate and set cameras to determine if one or more has wandered south from Canada. However, when she arrives, she quickly discovers that finding an elusive caribou isn’t her only challenge. Right on the edges of the Land Trust, logging interests and environmental activists are at an impasse over old growth forest, and several women have gone missing from the area over the last few years. Henderson’s focus on fascinating wildlife research work and the environmental impact of endangered animal species make this a unique and compelling read. While this is the third installment in the Alex Carter series, A Ghost of Caribou can be read as a standalone as well. Alice Henderson has carved out a niche in the thriller arena with this outstanding series that focuses on vanishing animals and their habitats, and I highly recommend her books.

How Not to Drown in a Glass of Water by Angie Cruz (contemporary fiction) – Written in a unique format across 12 job counseling sessions, the book is a quick but very compelling read. Cara Romero, a woman in her 50s who recently lost her job at a factory manufacturing lamps, narrates her story as she visits with a job counselor each week in order to find a job or qualify for more benefits. Interspersed among the counseling sessions are various forms and documents from her life – her rent application, job applications, and eventually her application for citizenship. Cara is tough, full of heart, and at times absolutely hilarious – she’s one of the best fictional characters that I have encountered in a long while. And the format works so well for telling Cara’s life story. I highly recommend this one – it is the perfect combination of humor, family drama, a strong setting (New York City’s Washington Heights), and characters you root for even as they sometimes make poor decisions.

The Invincible Miss Cust by Penny Haw (historical fiction) – From an early age, Aleen Cust loved animals and dreamed of working with them when she was an adult. But few women in the 1800s pursued such a career, and Aleen’s family was very much against this pursuit. Eventually, she goes against the wishes of her aristocratic family and enrolls in the New Veterinary College in Edinburgh where she encounters a variety of obstacles both from her family and her classmates that she must overcome, but she perseveres to become the first female veterinary surgeon in both Ireland and Britain. This is another great addition to the biographical fiction subgenre about real women who have been lost to history.

The Last Party by Clare Mackintosh (mystery/thriller) – This psychological thriller is set at The Shore, an exclusive community of lake lodges, in Llyn Drych (also known as Mirror Lake) under the shadow of Pen y Ddraig mountain and near the village of Cwm Coed, just inside the Welsh border with England. The town has a New Year’s Day tradition of a morning swim in the freezing cold Mirror Lake, but this year the swim is cut short when the body of a man is found floating in the lake. The victim, Rhys Lloyd, a local celebrity and has-been opera singer, is the developer of The Shore with his business partner Jonty Charlton. Due to The Shore’s location on the Wales/England border, a joint investigation with DC Ffion Morgan from North Wales and DC Leo Brady of Cheshire Major Crimes from the English side results. The story is written in a dual timeline format – the events that build up to the murder are relayed in the past, while the investigation into the murder is told in the present day – which works well for the mystery. The highlights of the book are the stellar mystery, the Welsh setting with a glimpse into the Welsh culture and history, and the solid cast of characters, and this is a stellar start to a new police procedural series.

Marmee by Sarah Miller (historical fiction) – Sarah Miller’s Marmee retells Little Women from the perspective of the four girls’ mother, Margaret March, known to them as Marmee. Using a journal/diary format, the book follows the same events and timeline as the original book, however, since an adult is the narrator, some events that occupy a lot of space in the original story get little more than a passing reference here and vice versa. Most notable to me were Marmee’s reflections on her husband’s absence, his lack of understanding of finances and how that impacts his family, the realities of the Civil War and how it was affecting those left at home, and the time she spends helping others. The novel traces Marmee’s own personal growth, as Alcott’s novel does for the March girls, and is at its strongest when revealing her struggles with loneliness while her husband is absent, her sadness at the war’s horrific impact on civilians, and her profound grief when she loses a daughter. Marmee is a beautiful book that can be read as a standalone or as a companion to Little Women.