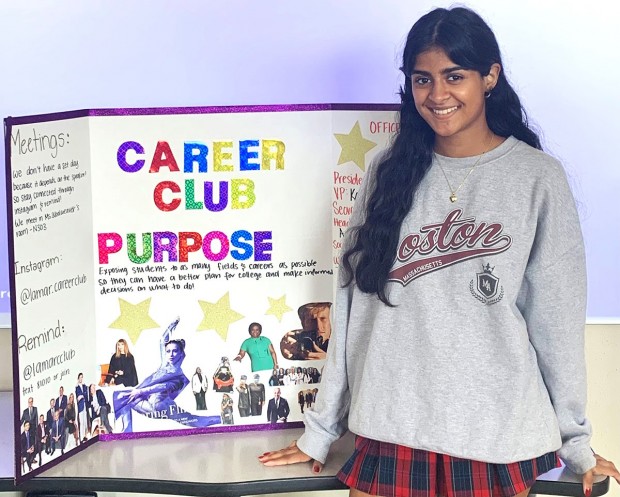 As the lunch bell rang on Sep. 14, hundreds of eager students flooded into the Lamar High School gym for Club Fair. With the hope of joining new clubs, students hoarded around rows upon rows of tables with trifolds and energetic club officers.

“We had a great turnout, dozens of students showed up to advertise and showcase over 50 clubs,” Communication Specialist Roxanne Van Ravenswaay said.

Both students and faculty reached a general consensus that, this year, Club Fair created more opportunities by showcasing over 50 clubs.

“Last year, we only had about 30 clubs show up and we had to change the date for Club Fair five or six times because of weather conditions,” Van Ravenswaay said.

For students who hold officer roles in multiple clubs, Club Fair was a stressful event. As an officer for six clubs, senior Chloe Diel had trouble staying organized and calm during the busy event.

“For Club Fair, I helped prepare the Asian American Club and Rock Climbing Club,” Diel said. “Coordinating so many clubs was hectic and that’s why I decided to focus on two clubs instead of six.”
Senior Diya Vettical also actively participates in numerous clubs. At least a week before Club Fair, Vettical started planning a few trifold designs and purchasing materials. From Future Business Leaders of America (FBLA) to Career Club, Vettical spent hours preparing creative and informative trifolds.

“It was very hectic because I had to organize multiple lunches where I could work with the other officers on the trifolds,” Vettical said. “We wanted each trifold to communicate a message and display what each club was about.”
Diel agrees that coordinating a time to work on the trifolds proved to be more difficult than initially anticipated.

“It was hard to get everyone on the same page and find time to work on the trifold,” Diel said. “In the future, we need to handle all aspects better to make the process easier.”

Fortunately, although Club Fair created a hectic and stressful environment, the hard work paid off in the end.

“Overall, Club Fair went really well,” Diel said. “We recruited many members who are interested in our club and joined the Remind to stay up to date.”

Although all of Vettical’s clubs gained dozens of members, Club Fair was not just about gaining new members but also about sharing the vision and goal of each club.

“We got about 50 members for Career Club and around 30 for FBLA and Women in STEM,” Vettical said.

Although there is a lot to learn in the coming months and years, Diel hopes that in all of her clubs, inclusivity and open-mindedness will remain at the forefront of everyone’s mind.

“We always try to make our clubs as inclusive as possible,” Diel said. “For example, rock climbing is very strenuous and tends to scare people away and for Asian American Club people kept asking if they had to be a part of the racial group to join the club.”

The need for improvement does not just fall onto club officers and students but administrators also hope to see growth as the year progresses.

“I always hope to see more clubs and more students involved in clubs,” Van Ravenswaay said. “Being involved in a club, fine art, or sport is very important in high school. Everyone needs to find a connection and clubs are a great way for students to have a connection to the school and make new friends.”