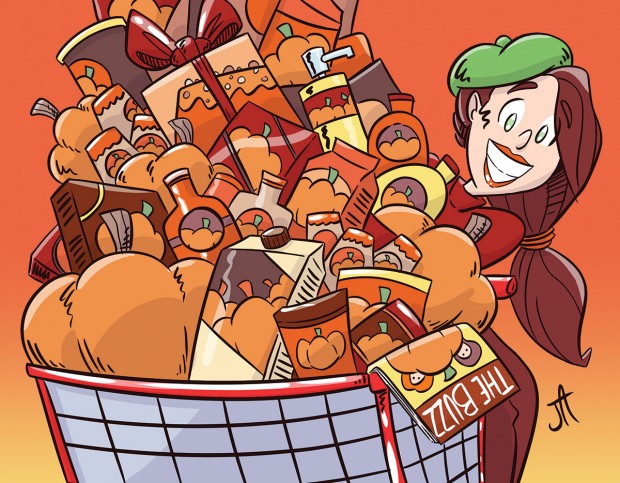 FALL PHENOM Are you a PSL lover or hater? Either way, there’s no escaping pumpkin spice everything this season. (Illustration: behance.net/runamokstudios)

Remember getting excited for fall? September 15 was about as early as we could decorate the doorstep with pumpkins.

Originally, pumpkin spice was a bottled blend of cinnamon, ginger, nutmeg, and allspice created by McCormick Spices in the 1930s as a convenience for pumpkin pie bakers.

Later, it was a latte you could only buy at Starbucks, only after Labor Day. It was delicious and new and oh-so-autumnal. So much so that it became Starbucks’ best-selling drink. Holiday in a cup.

Legend has it that the aha flavor moment happened when a Starbucks R&D team met and the director of espresso (that’s a thing) ate pumpkin pie as he was drinking, natch, espresso. Soon it became a culture of its own – the PSL lovers (Pumpkin Spice Lattes – and pumpkin spice in general – have their own acronym now). And the haters.

My daughter Claire (likely influenced by my own PSL thrill) is a lover. “Literally when Trader Joe’s gets all their pumpkin spice stuff, I go just to look at it. Because it makes it feel like fall, even when it doesn’t feel like fall outside.”

Jonathan, a Central Market team member, has been watching the lovers and haters as more and more pumpkin spice products flood the shelves. “We used to like pumpkin pie and the fall smell,” he says. “It’s just now we have a word for it. Now we like pumpkin spice.”

Jonathan contends that the controversy over the flavor is the key to its popularity. “It’s popular because people hate it,” he says. “That’s when you know it’s really a thing – if there’s a strong feeling attached to it, either good or bad.”

And feelings are definitely good or bad about PSL. Rachel Tobin says she often swings by a favorite bakery to buy her 16-year-old daughter a morning muffin filled with Nutella. “I went the other morning to get it for her,” the former teacher says, “and it was filled with pumpkin! I was like, ‘I don’t want that,’ and I left. I saw a pumpkin roll in the store with orange icing. Who buys that? Do people even eat it? I don’t want a pumpkin filled anything. I’ll pass.”

Then there’s Ali Leen, a data analyst who I ran into at H-E-B’s pumpkin spice dairy display of pumpkin-caramel yogurt, pumpkin spice cookie dough, pumpkin spice cream cheese. She was staring at it all, mesmerized by the choices. And that was just one of maybe 10 pumpkin spice-everything displays throughout the store.

“I love a good pumpkin spice every now and then, but this is a little excessive,” Ali said. “I mean, I’ve tried a couple of things here. The SToK Cold Brew Coffee Pumpkin Creamer was actually really good. But that’s pretty much where I get all my pumpkin spice, in coffee. Well, maybe pumpkin spice muffins or pumpkin pie. But I haven’t tried the Pumpkin Spice Oreos, and I’m honestly not tempted.”

After Ali, I met Leslie, a West U lawyer also perusing the pumpkin spice options. “Everyone at the office already thinks I’m crazy because I like pumpkin spice so much,” she said, asking me to use only her first name. “I always loved pumpkin pie,” she said, “because that was the only food at Thanksgiving I cared about. I don’t like turkey, I don’t like the other traditional foods, so I associated pumpkin with the holidays.”

Leslie was looking for Chobani’s Pumpkin Harvest Crisp yogurt, and also eyeing the Limited Edition Pillsbury Grands! Pumpkin Spice Rolls with Pumpkin Spice Icing. “I think I tried them at one point,” Leslie said. “They weren’t spectacular, but they weren’t bad.” Spectacular or not, Pillsbury claims: “Nothing summons the season quite like an oven-fresh Pillsbury Pumpkin Spice Cinnamon Roll. Imagine the memories you’ll make.”

So there it is. We aren’t really talking about a taste, we’re talking about a feeling. Fall, holidays, memories. “There’s also some FOMO going on, like fear of missing out,” Central Market’s Jonathan says. “It’s limited. You have to wait until next year if you don’t get it now. There’s a lot of psychological stuff happening with pumpkin spice.”

I admit to being tempted into buying several boxes of Pumpkin Spice Cheerios (hello Halloween college care packages), thinking they’d be good for a laugh. But maybe there’s a little more to it than that.