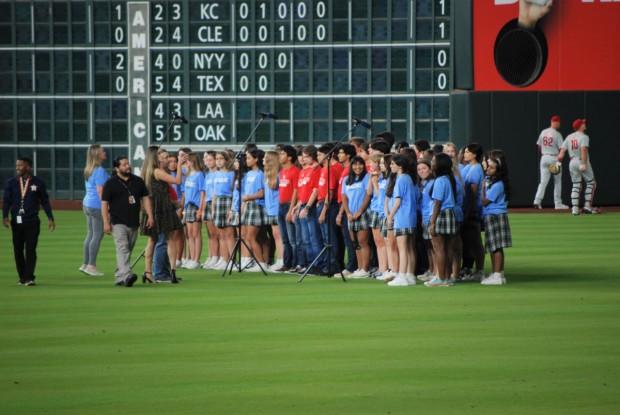 The combined choir listening to the Astros staffs’ reminders that they will be on the jumbotron and what the announcer would say before the start of the song.

Duchesne's Upper School Choir joined with the St. Thomas Singers to sing the United States National Anthem, The Star-Spangled Banner, at the Houston Astros Game against the Philadelphia Phillies at Minute Maid Park on Oct. 3. The choir’s countless 7 a.m. practices and dedicated preparation led up to the broadcasted performance. 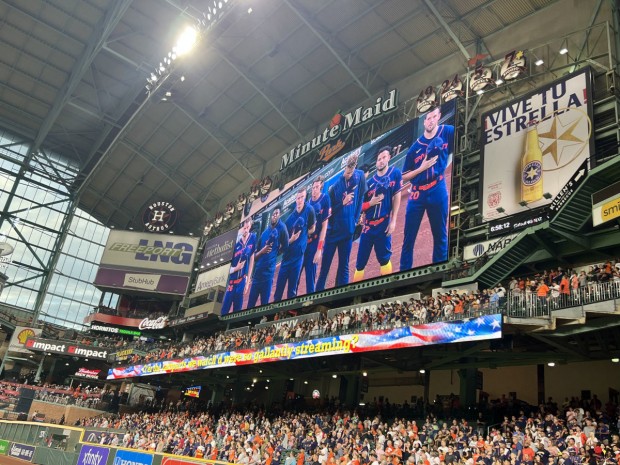 Astros players during the anthem on the Minute Maid jumbotron.

This tradition of singing the National Anthem for the Astros began when Kathy Montgomery, the Upper School Choir Director, reached out to the Astros organization to see if the choir could sing the anthem before the game. She then extended the offer to St. Thomas to sing together so Duchesne and St. Thomas had another activity together as brother and sister schools, in addition to the Duchesne students having the rare oppurtunity to sing with the tenor and bass voice types. 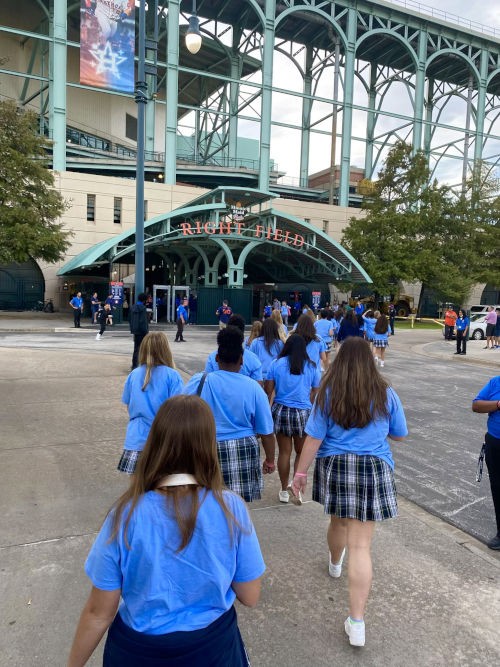 The Duchesne Upper School Choir began singing at the Astros game in 2015 and has continued ever since, excluding the 2 years due to Covid-19. The last time they performed was in 2020. At the beginning of the year, Mrs. Montgomery sent a recording to the Astros organization to be considered for singing the anthem. 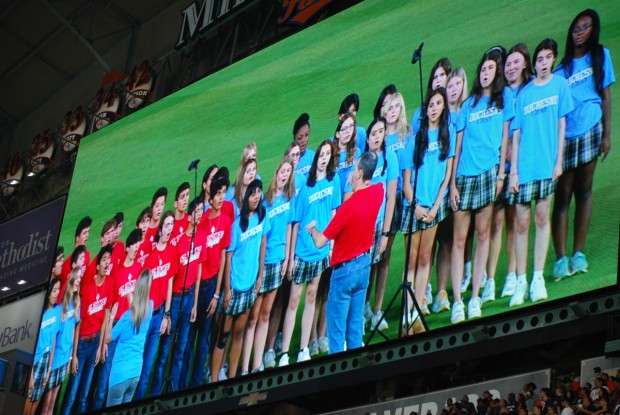 The Duchesne Upper School Choir began looking at the music on August 22nd during their morning choir classes. For the Astros performance, the anthem was sung in a four-part mixed arrangement: soprano, alto, tenor, and bass. The preparation included class grades where students were required to sing and record their specific parts of the songs for Mrs. Montgomery to evaluate. It was a gradual learning experience on how to enunciate vowels, which can be difficult for Southern Texan singers. Many hours were spent on perfecting the lyric pronunciation and singing as a unified group. 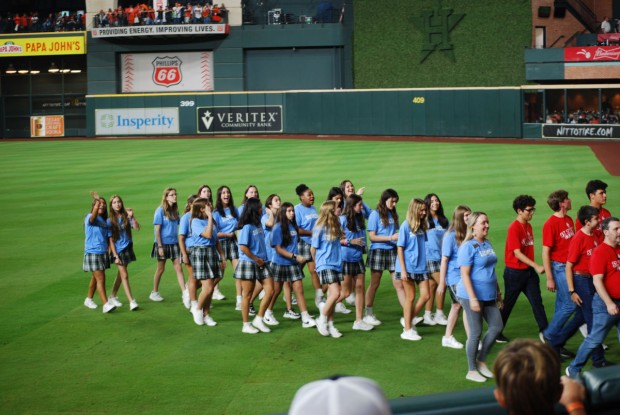 The combined choir exiting the field after singing.

Wearing their blue Duchesne choir shirts and plaid skirts, all Duchesne Upper School Choir members packed into a bus to head over to Minute Maid Park. Once they arrived, they first met the St. Thomas singers at the Diamond Lot Entrance off Hamilton. Afterwards, they were led down a ramp to a restricted area underneath the famous stadium. For about 15 minutes in this location, the Duchesne students practiced the National Anthem for the first time with the St. Thomas boys. Before going out to sing, they sang the National Anthem for the Astros Marketing Team for their approval.

The Astros organization has strict requirements for the singing arrangement. There could not be any added notes and the rendition had to be a very traditional version of the anthem. The combined choir was introduced by the television announcer, and the whole performance lasted around 45 seconds. The singers were instructed to try their best to not look at themselves on the jumbotron and focus on their singing, blocking out the reverberations caused by the stadium.

Junior Victoria Cramp who was a part of the choir voiced how it felt to sing on the Astros pitch, “I was really nervous, and I tried really hard not to look at myself on the jumbotron, but it was honoring to sing the anthem.”

The full performance of the National Anthem from the combined choir of Duchesne Academy of the Sacred Heart and St. Thomas High School at the Astros game on Oct. 3, 2022.

Mrs. Montgomery expressed her admiration for this performance, "It is an honor to be able to direct these wonderful singers and for them to be able to sing on such a stage our national anthem that means so much to so many people.”

The Duchesne section allowed the participants to stay and watch the baseball game with their families. There were many Duchesne supporters, such as Dr. Donald Cramp, Head of Duchesne Upper School, and many other faculty members and Duchesne students. Some girls took the bus back to Duchesne where they were picked up by their parents for the drive back home.

Congratulations to all Duchesne Upper School Choir members for another astounding performance as well as representing Duchesne Academy on the Astros stage!