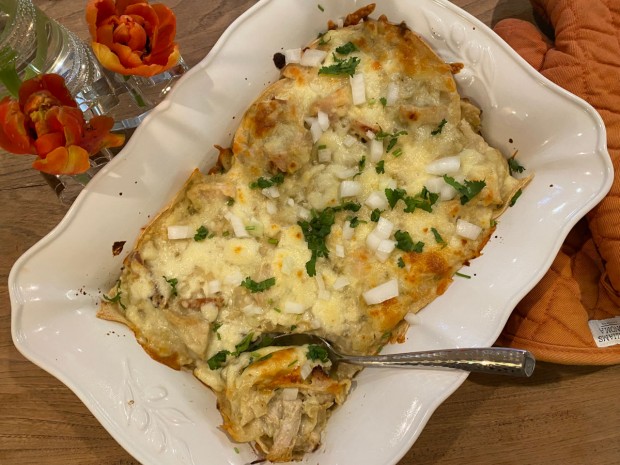 Here’s a way to use your beautiful leftover turkey in a 180 from the old turkey-cranberry sandwich (if you can’t think of not stuffing the turkey between bread, find a good option here).

Enchilada Turkey shines a whole new light on the day-after-Thanksgiving bird. Mixed with green enchilada sauce, Monterrey jack and queso fresco, tortillas, and onions, turkey has never looked so Texan. We’re calling this Enchilada Turkey because it’s so much easier than what you might think of as turkey enchiladas. No warming tortillas, no rolling fillings, no worrying about breakage. Just layer it all up like a Tex-Mex lasagna. Super easy. Because who wants to get into a big deal in the kitchen after all that cooking?

Preheat the oven to 350 degrees and spray a 9-inch-by-13-inch baking dish with nonstick spray.

Warm the olive oil in a large skillet over medium heat. Add 1 cup of the onion and cook until it is translucent, about 5 minutes. Stir in the enchilada sauce. Add the cream cheese and stir until it is melted and incorporated into the sauce. Turn off the heat. Stir in 1 cup of the Monterrey jack cheese and the turkey, coating the turkey with the sauce.

Layer 4 tortillas in the bottom of the prepared baking dish, tearing the tortillas to cover the dish. Spoon 1/3 of the turkey mixture onto the tortillas and spread evenly. Repeat the layers, ending with the turkey on top. Sprinkle the remaining ½ cup Monterrey jack and the queso fresco over the top. Bake for 30 minutes or until bubbly. Let sit for 10 minutes, then sprinkle with cilantro and remaining chopped onion.