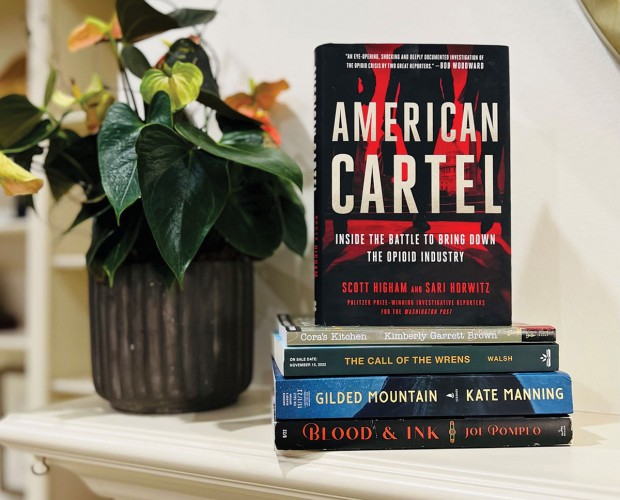 WHAT TO READ This month’s picks include two nonfiction books, one about the opioid crisis and the other an exploration of true crime and tabloid journalism and how the two are interconnected, and three historical fiction books set in Colorado, Europe, and Harlem.

American Cartel by Scott Higham and Sari Horwitz (nonfiction) – In the U.S., death by opioid overdose has consistently climbed over the last two decades. Unlike previous drug crises, the opioid epidemic was sparked by U.S. drug manufacturers and further flamed by those same drug companies, pharmaceutical distributors, pharmacies, and doctors. American Cartel chronicles how a small group of DEA agents and a band of lawyers worked diligently for years to stem the flow of these drugs and to make these bad actors pay for the crisis they created. While the book starts slow and slowly builds up steam, the second half reads like a thriller though if it were fiction the “bad guys” would appear comically drawn – the behavior these drug companies and distributors engaged in seems so over-the-top it is hard to believe that they and the scores of people working for them actually behaved so horrifically. American Cartel is a stellar (and at times horrifying) read that proves the continued importance of high-quality investigative journalism in today’s world and how greed created a national emergency that has swept the country unchecked.

Blood & Ink by Joe Pompeo (nonfiction) – Blood & Ink chronicles the killing of Reverend Edward Hall, whose congregation at St. John the Evangelist was filled with the city’s wealthy citizens, and Eleanor Mills, a member of the church and choir where Hall preached; both individuals were married to other people. The two bodies were discovered on the morning of Saturday, September 16, 1922, on the edge of town, arranged together as if sleeping on the ground under a crabapple tree. From the start, local officials mangled the investigation. By the afternoon of the couple’s discovery, thousands of people turned out to see the bodies, trampling over grass and the crime scene to view the couple while no one attempted to preserve the crime scene. New York City newspapers caught wind of the story and started covering it in what would eventually lead to a three-way fight to sensationalize the case and ultimately to the birth of tabloid journalism. Pompeo weaves in how the advent of this tabloid phenomenon began and how this particular murder contributed so heavily with its splashy headlines and sensational photos relating to the crime. Blood & Ink explores our fascination with true crime and tabloid journalism and how the two are closely interconnected.

The Call of the Wrens by Jenni L. Walsh (historical fiction) – This dual timeline tale follows two women born several decades apart who work as WRENS, in the Women’s Royal Naval Service, delivering messages via motorcycle during war time. Marion joins in 1917 to avoid homelessness while in 1936, Evelyn has overcome a disability and has a passion for automobile racing. She gets drawn into service when she learns about the WRENS. Both women find their purpose and passion during the two world wars as WRENS and eventually their two stories weave together in an emotional conclusion. The Call of the Wrens highlights a courageous group of women whose stories are less well known and whose contributions to both world wars will now not be forgotten.

Cora’s Kitchen by Kimberly Garrett Brown (historical fiction) – This epistolary novel set in 1928 Harlem stars Cora, a librarian at the 135th Street library, who longs to become an author. Langston Hughes is a library patron who has left for college, and one day she decides to write him a letter asking for advice on following her dream of writing. He writes back launching a correspondence that galvanizes Cora to pursue her literary ambitions. When Cora must take a leave of absence from the library to fill in for her cousin as a cook at a wealthy white woman’s home, Cora unexpectedly befriends her employer Eleanor, and the two enter into an alliance that will help them step outside the roles and expectations society places on them. I love novels written in epistolary format and enjoyed the presence of Langston Hughes in the book as well as learning more about 1920s Harlem.

Gilded Mountain by Kate Manning (historical fiction) – Set in the mining town of Moonstone, Colorado at the turn of the 20th century, this epic tale follows Sylvie Pelletier as she comes of age as well as telling the story of coal miners and their struggles against ruthless mine owners during this time period. Sylvie loves writing essays in school and lands a job at the local newspaper owned by Miss Redmond, who started her own newspaper when no one else would hire her. Eventually, Sylvie is offered a higher paying job as a secretary to the wife of the mine’s owner, Mrs. Padgett, and she sees how the wealthy live. As conditions at the mine worsen and violence seems inevitable, Sylvie tries to navigate between the two different worlds and struggles to choose sides amid conflicting relationships. Lyrically written, Gilded Mountain explores the always relevant topics of coming of age, belonging, justice, equality, and family while detailing a period of history not often covered in fiction.