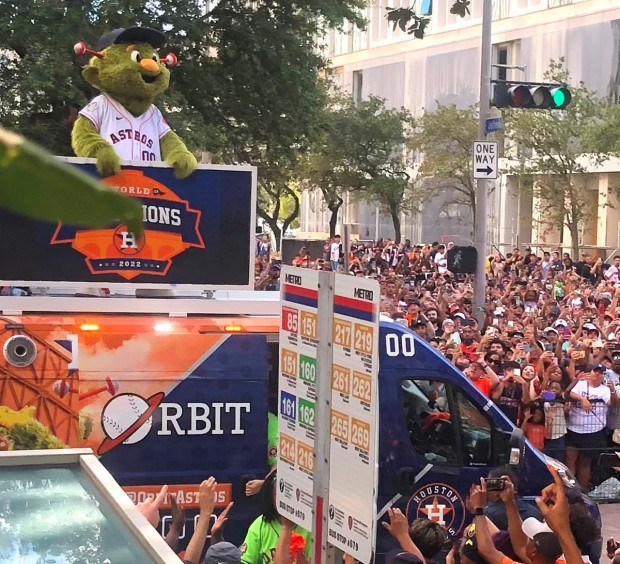 Orbit greeting the thousands of fans that came out to cheer on the Astros 2022 team.

Over a million Astros fans were on a mission to celebrate our 2022 World Series winning team.

Tackling parades in a large city like Houston is a combination of feeling like a contestant on the endurance TV show Amazing Race, running a marathon, and being one of the numbers that gets moved around in a giant Sudoku puzzle.

This year, I was on a mission to get right by the action. In 2017, I went to the parade with a friend, and we grabbed our two high schoolers and four of their friends from St. Agnes High School and St. Thomas High School. This year, the kids are all off at college and my friend had another commitment. So I went solo and yes, I lived to tell about it.

I plotted my plan of action. The parade was to start at noon, but the surrounding streets started closing at 8 a.m. I did some research and discovered a hotel on the route that let me valet and had a patio restaurant that overlooked Smith Street. Jackpot.

When thousands of people get to a parade three hours early, sometimes they make up their own fun while waiting. There were lots of air horn musicians. One man used his bullhorn to sing a rousing rendition of We are the Champions. Hundreds of fellow parade friends sang along.

At one point, a giant yellow ball was bouncing over and around the crowd. When the ball landed over the impassable barricades on both sides of Smith Street, everyone thought the fun was over but then a police officer appeared and volleyed it back. The crowd cheered.

At this point it was “only” two hours until the parade.

I met and people-watched some fun people.

Surrounded by people outfitted in orange Astros shirts, two ladies vacationing from England shared their observation as politely as possible: “Americans really are into their sports!” They ask if it’s a national holiday. I say no but then realize that most schools, universities, and some businesses were closed, so pretty much it was a holiday, at least for greater Houston.

The restaurant deck at the hotel was great. There was a chair, a nearby bathroom, and access to beverages and food. The only issue was some rather large bushes that blocked the view a bit. I got some great photos, if you don’t mind a few limbs or leaves in there. It builds character, right?! If you stood just right, shoved your hand through the bush, and stretched your hand you were good to go! 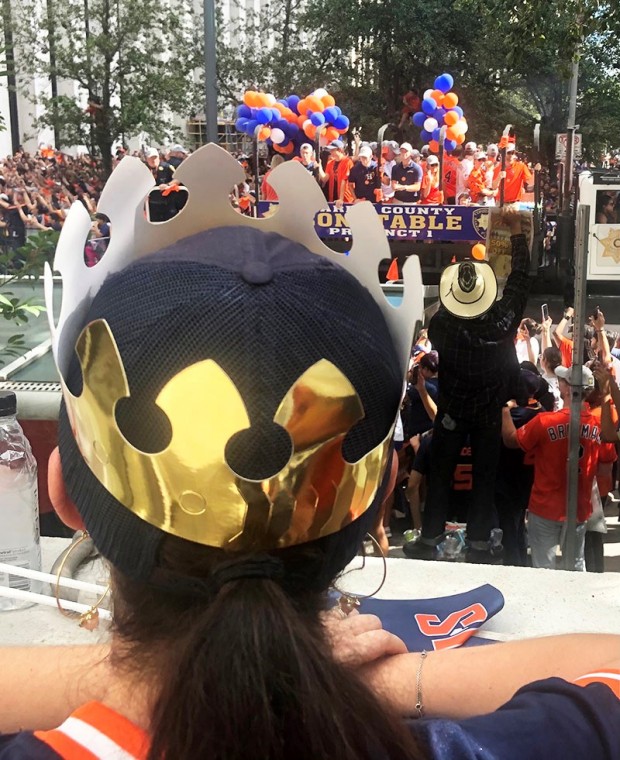 My family is a big fan of rightfielder Kyle Tucker, nicknamed King Tuck. Two fans, Amber Stoltz and Stephanie Concialdi, who sit in section 153 by right field, bought hundreds of gold crowns to give to all the people sitting in that area. I was inspired to order some of my own gold crowns that come in packs of 24. (My husband and our dog were troopers for wearing crowns while we watched the games for home.) I took the extra crowns to the parade and passed them out to kids and King Tuck fans.

On the patio, a man came by with a plastic bag and asked if anybody wanted a free beer. The guy next to me said, “Sure!” and was handed a cold Dos Equis bottle. When the happy beer drinker said thanks, the generous giver said, “Go Astros!” Then when the man next to me realized that he needed a bottle opener, another person on the patio said, “Wait! I can do it!” Then he proceeded to use his Aggie Ring to take off the bottle cap. Now that’s something worth saying, “Whoop!” for.

Only one hour until the parade. 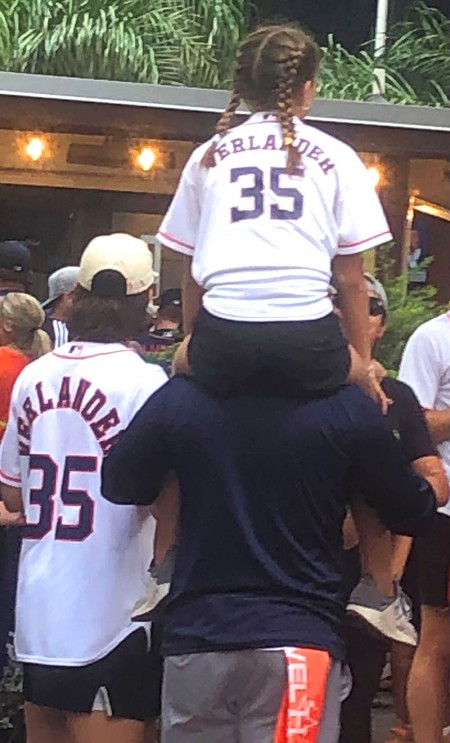 One thing I love about the Astros and their fans is that in the sea of jerseys, you see just about every player represented. It is not just one superstar; they are all superstars. I saw Guriel, Altuve, Valdez, Bregman, Alvare, Verlander, Peña, and Tucker. There were even some old-school Astros jerseys spotted: Ryan, Biggio, Bagwell.

Then the highly anticipated time everyone had been waiting for…High Noon and the official parade start time. The Astros furry green mascot, Orbit, waved from his giant baseball float. H-Town University bands marched by: the Texas Southern University Ocean of Soul Band, the Rice MOB Band, and the University of Houston Marching Band. One float included Houston Astros royalty, Craig Biggio and Jeff Bagwell. Then the stars of the parade appeared…the 2022 World Series winning team…The Astros!

They waved, they held up the World Series trophy, the crowd screamed like it was a Beatles concert! Orange and blue confetti catapulted from their vehicles floating down upon the appreciative fans. 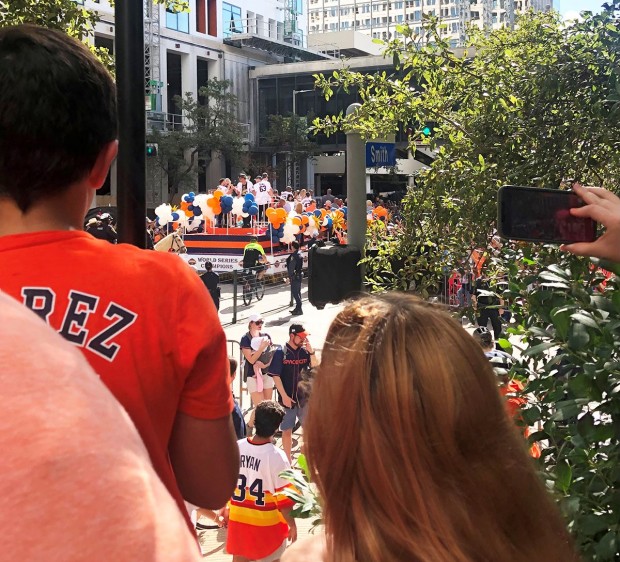 The crowd goes wild when Astros players make their way through downtown.

Sure, it might have been nice if the players’ vehicles could have driven a little slower so you had time to identify them. And sure, I might have had a bit of an obstructed view with the bushes in front of me but even if I did not get a good picture, it will always be a great memory.

Was it all worth the four-hour wait and the two hours it took to get home? Absolutely!

When I asked some of my new friends what had been one of their favorite parts of the day, many said that the crowd felt like Houston with all sorts of people together and having a great time feeling like family celebrating the Astros together.

As people were leaving, I saw a little girl walking down the sidewalk with her parents, and she was wearing one of my gold crowns. It made me so happy! 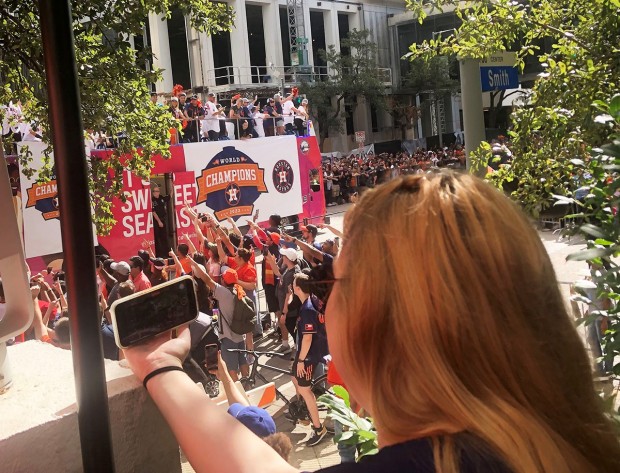 A dedicated paradegoer stretches out with her cell phone to capture awesome photos to always remember the 2022 Astros World Series World Champion Parade. 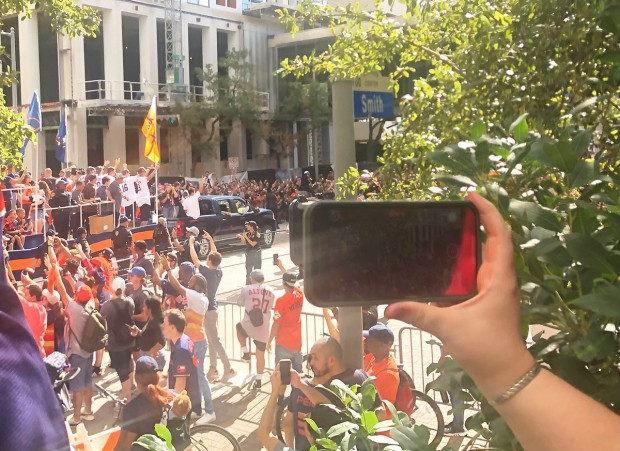 Over a million Houstonians gathered to cheer for our champs.