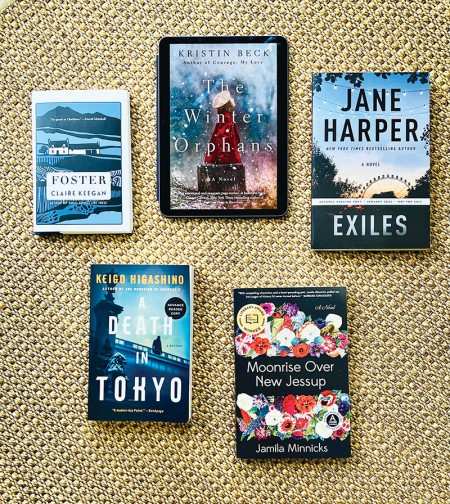 WHAT TO READ This month's selections include two mysteries set in Australia and Tokyo, two historical-fiction novels, and a touching novella. (Photo: Cindy Burnett)

A Death in Tokyo by Keigo Higashino (mystery/thriller) – This tightly-crafted and atmospheric tale is set in the central Tokyo district of Nihonbashi and stars inspector Kyoichiro Kaga, a former teacher who has begun a second career as a homicide detective. As the book opens, a man has stayed alive long enough to drag himself to the famous Nihonbashi Bridge, where he then dies at the foot of the statues of mythological kirin that decorate it. Kaga is one of the officers assigned to the crime and finds himself at odds with his superiors when he believes that they have the wrong man in custody for the crime. Chock full of twists and turns, A Death in Tokyo is both a solid police procedural as well as a fascinating glimpse into Japanese culture and society in the 21st century.

Exiles by Jane Harper (mystery/thriller) – Jane Harper returns with her third book in the Aaron Falk series following The Dry and Force of Nature. Exiles can easily be read as a standalone, and readers will not feel lost in the story if they have not read the first two. With her signature style and evocative writing, Harper brings South Australia wine country to life when Aaron Falk arrives to serve as godfather to his closest friend’s baby son. While there for the christening, Falk, who is a federal investigator, finds himself drawn into both the case of a woman who went missing a year ago during the town’s annual wine festival, abandoning her child in the parking lot, and a years-old unsolved murder. As he works to solve both cases, Falk also begins to re-evaluate his own life choices. Harper is my favorite mystery writer, and Exiles’ compelling story and vividly drawn setting permanently cement her first-place position for me.

Foster by Claire Keegan (fiction) – This brief book (it is only 92 pages) packs a big punch. Foster examines the importance of connection and community in a lonely child’s life. A young girl who is starved for affection spends the summer with her childless aunt and uncle and gains an understanding of what a caring household looks like compared to her regular existence with parents who don't provide any kind of stability and are not suited for parenting. Foster was published in the United Kingdom in 2010, but was just recently published in its entirety in the United States. Foster is both heartbreaking and uplifting, and is the perfect example of why the importance of community and close relationships is a theme that is really resonating with me.

Moonrise Over New Jessup by Jamila Minnicks (historical fiction) – Alice Young accidentally stumbles across New Jessup, Alabama in 1957 after fleeing her hometown. New Jessup is an all-Black town created by individuals who want no part of integration and believe that Black people will fare better by remaining together and rejecting desegregation. There are no “whites only” signs, no restrictions where Blacks may go, and no white people living there at all. In New Jessup, Alice begins a relationship with Raymond, an organizer whose activities could lead to their removal from their town. As turmoil grows within New Jessup as well as in the rest of the country, Alice must contend with balancing work and homelife, her search for her missing sister, and how to protect her daughter from the world at large. This glimpse into a less well-known aspect of history with which I was completely unfamiliar was both fascinating and compelling.

The Winter Orphans by Kristin Beck (historical fiction) – Employed by the Swiss Red Cross, nurse Rösli Näf runs the colony of Château de la Hille, a dilapidated castle in Southern France, serving as the caretaker to over 100 refugee children who have fled the Nazis. When the Nazis invade that area of France, the children are once again in peril – especially the older ones, who once they reach 18 face deportation and ultimately death. Rösli and volunteer Anne-Marie Piguet come to realize that the only way to save the teenagers is to ferry them out of France through Nazi-occupied territory. Using a mixture of real and fictional characters, Beck chronicles the trials and tribulations the women faced as they worked to smuggle the teens out of France to safety in neighboring countries. The Winter Orphans brings to life the courage and bravery of everyday people during World War II.