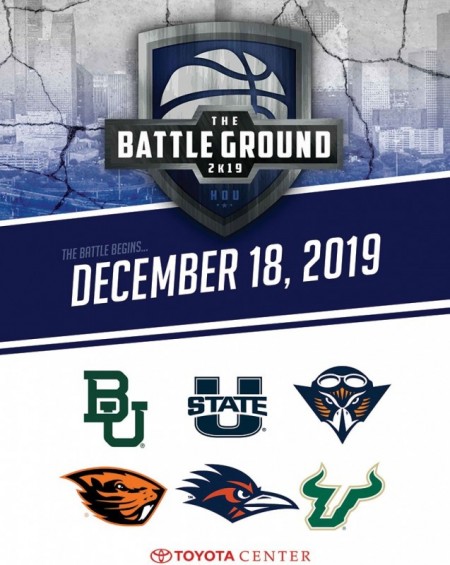 U-Sports Group will roll out the first event in its college basketball inventory this winter with the debut of The Battleground 2k19 (@Battleground2k). The neutral-site triple-header will take place Weds, Dec. 18 at Toyota Center.

Two of the top teams participating in The Battleground 2k19, #17 Baylor and #18 Utah State, are ranked in ESPN.com’s Way-Too-Early Top 25, while South Florida and Oregon State are viewed by many as Top 50-caliber teams this season. Additionally, UTSA is highlighted in Mid-Major Madness’ The Other Top 25… and UT Martin has made significant upgrades to its roster and could be one of the big surprises in college basketball this season.

The backdrop for The Battleground 2k19 will be a campaign called Athletes Against Abuse. The [a3] Initiative, in connection with U-Sports Group, will strive to blur the lines between sport and service, inspiring athletes to use their ability, notoriety and influence to improve the lives of those around them. The [a3] Initiative will utilize The Battleground 2k platform to get college basketball programs involved and bring awareness to child abuse in our country.

Tickets can be purchased online at www.Battleground2k.com or www.ToyotaCenter.com. Tickets will also be available at the Toyota Center box office. For group tickets and special rates for youth organizations and sports teams, please send inquiry to [email protected]. Game times and television broadcast information will be released at a later date. The Battleground 2k19 is a premier basketball event owned and operated by U-Sports Group, LLC.