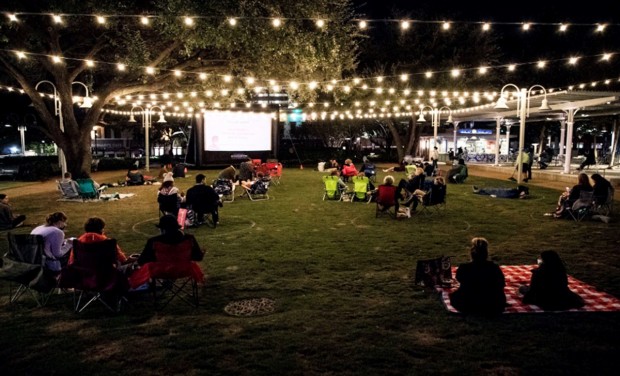 The Spring 2021 schedule for Movies at Market Square Park will continue with physical distancing guidelines in place in order to ensure the safety of all who attend. (Photo courtesy of Downtown District)

The Houston Downtown Management District (Downtown District) announces the Spring 2021 schedule for Movies at Market Square Park, with the continuation of physical distancing guidelines in place in order to ensure the safety of all who attend. This popular outdoor film series features free screenings of 80s and 90s classics on Wednesdays and Fridays this March through May.

Featured films are:
St. Elmo’s Fire (R, 1985, 1h 50m): A group of recent college graduates embark on a series of misadventures in the real world. There’s Kirby, a waiter who wants to be a lawyer; Kevin, a moody writer who yearns for the wild Jules; Alec, whose political aspirations alienate his girlfriend Leslie; and Wendy, a quiet girl in love with Billy, who juggles roles as husband, dad and drunk. Together they grapple with adulthood.

Heathers (PG-13, 1988, 1h 43m): Veronica is part of the most popular clique at her high school, but she disapproves of the other girls’ cruel behavior. When Veronica and her new boyfriend, J.D., confront clique leader Heather Chandler and accidentally poison her, they make it appear as a suicide. Soon Veronica realizes that J.D. is intentionally killing students he does not like. She races to stop J.D. while also clashing with the clique’s new leader, Heather Duke.

The Bodyguard (R, 1992, 2h 10m): Best-selling pop diva Rachel Marron deals with a stalker whose obsession has risen to the level of disturbing threats. At the urging of her manager, Rachel hires former secret service agent Frank Farmer as her bodyguard. Initially resented and treated with disdain for his hard-nosed security procedures, Farmer soon becomes an integral part of Rachel’s inner circle. As they spend more time together, client and protector become closer still.

The Princess Bride (PG, 1987, 1h 38m): This cult classic tells the story of a farmhand named Westley who, accompanied by companions befriended along the way, must rescue his true love Princess Buttercup from the odious Prince Humperdinck. To be reunited, they must battle the evils of the mythical kingdom of Florin.

Nine to Five (PG, 1980, 1h 50m): Three female secretaries who decide to get revenge on their tyrannical, sexist boss by abducting him and running the businesses themselves. The trio, one of whom has been passed over for promotion because she is a woman, spend a night together having drug-induced fantasies of killing the slave-driving chauvinist. One of them panics the following day when she suspects she really has poisoned the tyrant.

Coming to America (R, 1988, 1h 57m): Eddie Murphy plays Prince Akeem, the prince of a wealthy African country, who wants for nothing except a wife who will love him in spite of his title. To escape an arrange marriage, Akeem flees to America to find his queen. Disguised as a foreign student working in fast food, he romances Lisa, but struggles with revealing his true identity to her and his marital intentions to his king father.

Guests are invited to bring blankets or lawn chairs and grab take-out from on-site cafe Niko Niko’s or another Downtown restaurant.

Gala at The Gordy