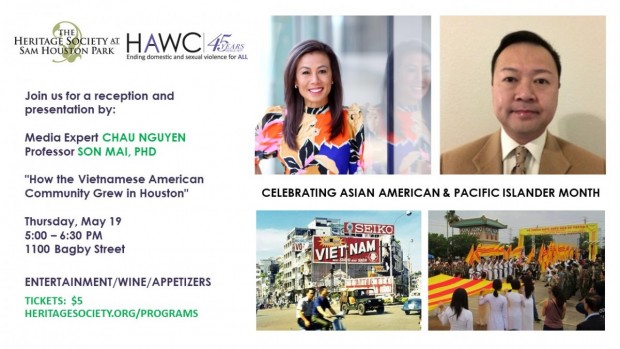 May is Asian American Pacific Islander Heritage Month! Join media expert Chau Nguyen and Professor Son Mai, Ph.D. of Midland College as they tell stories of the Vietnamese American migration experience in Texas. The event is Thursday, May 19, from 5:00 - 6:30 p.m., at The Heritage Society, 1100 Bagby Street. Enjoy appetizers from Jenni’s Noodle House, wine, music, and poetry. We would like to thank Houston Area Women’s Center, UH-Downtown’s History Department, and Midland College for their support in sharing Houston’s heritages.

The Vietnamese community in the United States was minimal until Vietnam War ended on April 30, 1975. Early immigrants entered the country as refugees, with most being supporters of the non-communist South Vietnam in the Vietnam War conflict, and fled due to fear of political persecution under the new communist regime. After resettlement, the Vietnamese Americans continued to struggle with challenges in acculturation and discrimination in their new country. By the latest U.S. Census, the Vietnamese American population is now more than 1.5 million, with half residing in the two most populous states of California and Texas, primarily in urban areas.

Speaker’s Bio: Chau Nguyen is the Chief Public Strategies Officer for the Houston Area Women’s Center. She is tasked with managing and expanding key partnerships, while positioning HAWC as thought leaders in order to drive broad awareness of domestic violence and sexual assault, with a goal of reducing interpersonal violence and changing cultural norms about how survivors are understood. Prior to her leadership in the non-profit space, Chau spent 15 years as a television news journalist and last served as an anchor and reporter with KHOU TV. She is the first Vietnamese American journalist to receive an Emmy Award for her documentary series covering a medical mission in Vietnam, and the Houston Press has named her Reporter of the Year. Chau came to America, and to Houston, when she was two years old, escaping from Vietnam, at the end of the Vietnam War, with her parents and three siblings. As a refugee immigrant whose family settled in Houston and still calls Houston home, she is passionate about staying connected and serving her community.

She is an American Leadership Forum Class 47 Fellow, was recently appointed by the city of Houston to serve on the Women’s Commission, and is a regular panelist on the popular FOX 26 Show, “What’s Your Point,” where she advocates for women, children and families on political and social justice issues.

Speaker’s Bio: Dr. Son Mai was born and raised in Texas. He holds a B.A. in History from the University of Texas at Arlington, an M.A. in History from Stephen F. Austin State University, where he wrote his thesis on Vietnamese Immigration to Texas, an MBA from McNeese State University, and a Ph.D. at Texas Tech University, where he focused his research on Vietnamese fishing communities along the Texas Gulf Coast. Dr. Mai is currently an Associate Professor of Organizational Management at Midland College and has over 11 years of experience in teaching History.