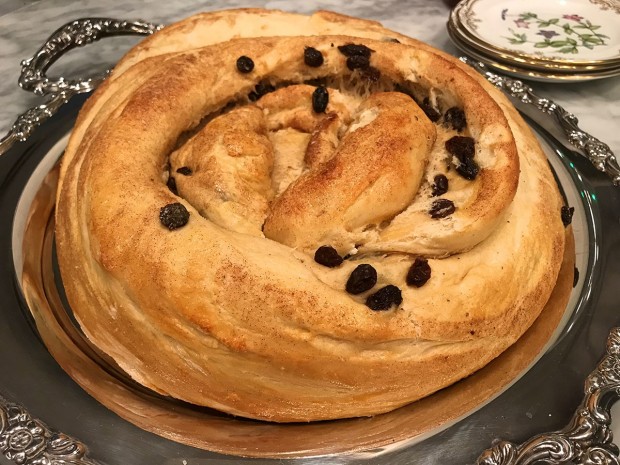 In a large stand mixer fitted with the paddle attachment, combine the yeast, 2 cups flour, honey, salt and butter. Slowly add the hot water, mixing in between additions, and scraping the bowl a couple of times. Beat on medium speed for 2 minutes. The mixture will be runny. Add the eggs one at a time, and then the egg white. Scrape the bowl again, and beat the still-runny mixture on medium-high for 2 minutes.

Change to the dough hook attachment, and add the remaining flour, a cup at a time, until the dough comes together and is no longer sticky. You may need a little less or a little more flour to achieve a smooth ball of dough. Knead for 10 minutes, either with the dough hook or by hand on a lightly floured surface. Shape the dough into a ball and place it back in the mixing bowl. Cover it with a tea towel and let it rise for 1 hour. The dough should double in size.

Turn the dough out onto a lightly floured surface, and punch it down (kids love this part). Divide the dough in half. Drain the raisins, and add a handful to each half, kneading to incorporate the fruit throughout the dough. Divide each half into 3 equal parts. With your hands, roll 3 of the pieces into 12” lengths, and lay them side by side, parallel. Start the braid in the middle, and braid as you would a ponytail. Work your way to the end, then start in the middle again, working toward the other end. Pinch the ends together and tuck them under the loaf. Repeat with the other three pieces of dough.

Option: For the Jewish New Year, we make a round challah. The reason for that is debated: Some say it symbolizes the circular nature of the year, others say it resembles a crown as we recognize God as king of the world. Either way, if you’d like to make a round challah, just divide the dough in half, then roll one piece into a long log, and repeat with the other half. Take one end of the length and begin spiraling it in toward the other end, to make a snail-like shape.

Place the braided (or round) loaves onto baking sheets lined with foil (for easy cleanup), and brush each with the egg yolk and water mixture. In a small bowl, mix the cinnamon and sugar together, then sprinkle the tops of the loaves liberally with cinnamon sugar. Let the loaves rise a second time, uncovered, for 1 hour. They should double in size. If you’d like, you can repeat the egg wash-cinnamon sugar step again just before baking the challahs.

Preheat the oven to 350 degrees. After the loaves have risen a second time, place them on separate racks in the oven and bake about 25 minutes, switching racks halfway through the baking time, at about 13 minutes. The challah is done when the top is shiny and golden and a toothpick inserted into the center comes out clean (or, if you are like us and you like your challah a little bit gooey, the toothpick should come out just a tiny bit sticky).

Let the challahs cool for about 30 minutes before ripping them up.

PS: Frozen and defrosted challah is great, so if you only need one loaf, make two anyway and freeze one!