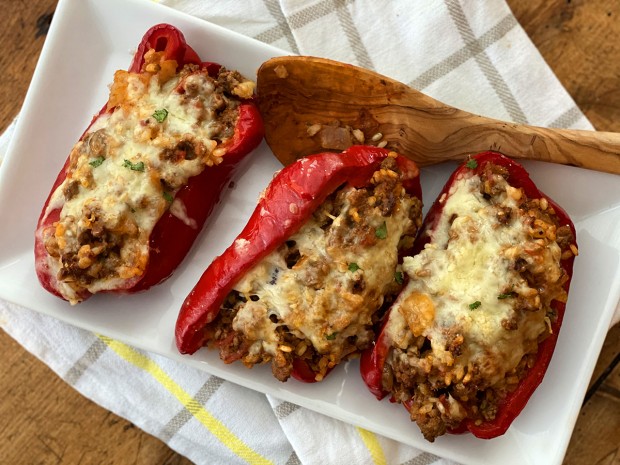 Heat the oven to 400 degrees. Cut the peppers in half lengthwise and carefully remove core, seeds and ribs using a paring knife. Arrange the peppers, cut-sides up, in a 9-by-13-inch pan or other baking dish in which they fit snugly.

In a large (12-inch) skillet, heat the olive oil over medium. Add the fennel and onions and cook, stirring occasionally, until tender, 6 to 8 minutes. Stir in the garlic, oregano and red-pepper flakes, and cook until the garlic is fragrant, about 1 minute. Add the beef and cook, breaking up the meat with a wooden spoon, for 3 to 5 minutes, until no longer pink.

Add 1/2 cup wine, increase the heat to medium-high and cook, scraping the bottom of the pan, until the liquid in the pan is reduced by about half.

Add the tomatoes and their juices, salt and pepper, and bring to a boil. Remove from the heat and stir in the rice, Parmesan and parsley, if using. Taste and adjust seasonings.

Allow the peppers to cool for 5 minutes, sprinkle with parsley, if using, and serve hot.