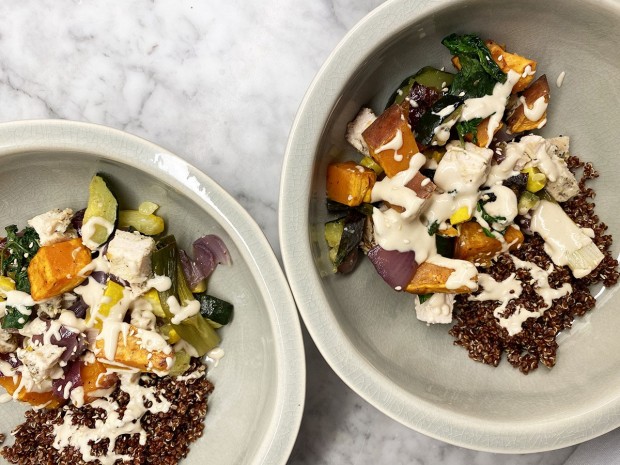 This Roasted Veggie Bowl with Quinoa and Tahini Dressing combines a bunch of veggies – sweet potatoes, onion, zucchini, spinach – with crunchy quinoa and an addictive Tahini Dressing to make a craveable and easily customizable dinner at home.

This veggie and grain bowl is quick and satisfying, and tastes like something you’d order at a restaurant.

Preheat the oven to 425 degrees.

Line two sheet pans with parchment paper. On one, put the sweet potato and onion, and on the other, put the zucchini, squash, and green onion. Toss each with a tablespoon of olive oil and a generous sprinkle of salt and pepper. Roast in the oven for about 20 minutes, until the vegetables are soft and just begin to brown.

Warm another tablespoon of olive oil in a skillet, then add the spinach and/or kale, and a little salt and pepper. Sauté over medium-low heat for 3 to 4 minutes, until the greens begin to wilt.

For the dressing, whisk all the ingredients together in a small bowl. It will look lumpy, but just whisk through it until the dressing is smooth.

Toss all of the vegetables together in a large bowl along with the chicken. Serve in a bowl, with a scoop of quinoa, and a couple scoops of the roasted veggies and chicken. Drizzle with the Tahini Dressing.

To cook the quinoa: Rinse in quinoa in a fine-mesh strainer under running tap water for about 30 seconds. Put the quinoa, water, and a little salt in a medium saucepan, and bring to a boil. Reduce the heat, cover, and cook for another 12 minutes.