The Center of the West Universe 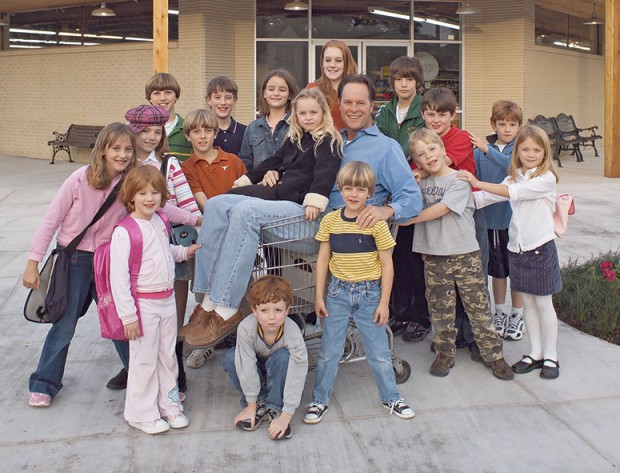 It’s 2:45 on a breezy, blue-sky, bird chirping Tuesday afternoon. The West University Elementary School bell has rung. Both sets of JMH doors are swung wide open to beckon the good weather along with a herd of relieved school kids trudging beneath overstuffed backpacks, toward the store. Betty Lanclos, Vivian Wasson and Jimmy LaRoe assume their cash registers. Everyone knows the drill, as the kids unload backpacks in a line about 4 feet inside the front door; like their mothers tell them not to do at home. But at JMH, it’s part of the charm.  Betty, Vivian and Jimmy seem more like aunts and uncle than employees, as children pull out waded dollar bills. Others sign their name to a simple slip of paper known as a charge slip.

“I still have the first charge slip John ever signed,” said Plumb Street resident Camille Mealy. John, a teenager, was 4 years old at the time, printing his first name only. Today Camille stopped in to charge some ground beef. She signs her first name as well. But in recent years one more piece of information is now required, her phone number. Up until about 4 years ago, change was just another word for the coins handed out from the original upright cash registers.  That’s when the store was sold for the first time in its 50-year history. The other kind of change, in a store not known for change, always comes with a degree of teeth-gnashing from regular customers.

“When they started asking for my phone number (on the charge slip) I said O.K., but I’m drawing the line at having to put my last name,” said Camille, grinning and bearing it.

Some change however, has been welcome. Tuesday is now tamale day at JMH.  It’s the day when the Texas Tamale Company comes and sets up shop with free samples and steamed tamales ready to take home. Fran, the “tamale lady” hands out samples with the patience of Job to dozens of school children. At 3:45 the drill begins again as the Lanier Middle School bus makes its stop in front of the store. 2:45 p.m. to 4:00 p.m. is the busiest part of the JMH day.

“It’s Mayberry R.F.D.,” said customer Susan Hoffman. “I send my kids right down Edloe on their bikes to pick up things for me. It’s the perfect bike trip.”

If JMH is Mayberry R.F.D. then Betty and Vivian are its Aunt Bees. Vivian spent 30 years working in the nursery of West University Methodist Mother’s Day Out program. For the last 4 years, as a JMH checker, she has greeted and advised kids and parents she has known or cared for, for decades, occasionally handing out parenting advice along with milk and eggs.

“Mothers will call me and tell me not to let their sons come home with 7 candy bars and I won’t let them do it,” said Vivian.

Betty, an 18-year-veteran of the store speaks fondly of the neighborhood teenagers who have come through as sackers, checkers and stockers. To hear her talk you’d think that each is extremely attractive, bright and either famous or about to be. Thanks in part, of course, to JMH.

One such success story is Bruce Wallace, a recent graduate of Baylor University.  Bruce stops in to visit his former employer every college break, according to his mom, Pat Wallace.

“Bruce’s fondest childhood memory is working at JMH. He loved working those old cash register keys. When Y2K was supposed to hit he said ‘JMH is ready.’

Everywhere I went in the neighborhood people would say, ‘I just loved visiting with Bruce today at JMH.’ He was shy at first. But he learned to talk. He’d known most of these people his whole life. He learned so much about looking people in the eye and making conversation,” said Pat.

Jim Covington, a University of Houston law professor emeritus and his wife, Janet, have been regular customers since 1972. Jim, who also has an accounting background, has marveled for decades at the deliberate, but charming inefficiency of the whole operation.

“Paying a person to do nothing but stand there and weigh your vegetables and write down the price on a paper bag with a grease pencil was charmingly inefficient. I was under the impression that the owners were keeping the position out of a sense of loyalty to long time employees as much as anything,” said Jim. 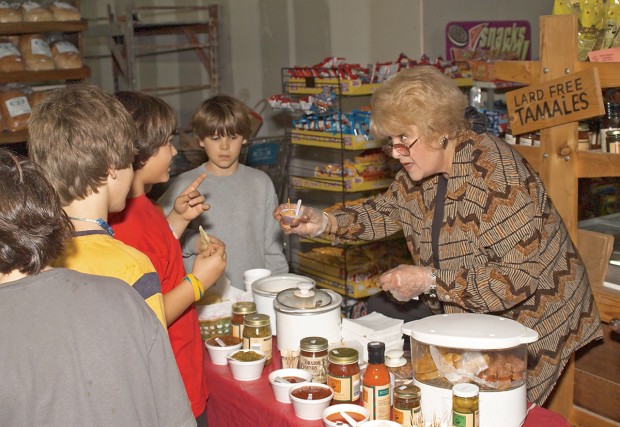 That practice only ended around 4 years ago when original owners Rudy Darilek, Jody Haas and Vic Stanek finally sold the store to Janet and Charlie Wilson, owners of Edloe Street Deli. Wilson was impressed with the store’s legacy of employees.

“I used to have a stack of cards from people who worked here as teenagers.  Now they’re doctors, lawyers, entrepreneurs…. I always tried to impress that on my current employees; that they are following in a great legacy,” said Charlie.

Darilek, Haas and Stanek also began as employees in their teens, back when JMH was a small chain of stores. The only JMH store in West University at that time was on Milton and College streets. The store, which began in the ‘30’s, closed in the early 90’s to the chagrin of loyal customers.

“I remember people saying that the real “purist” would shop at the Milton street store. The JMH on Edloe was considered the “new” JMH. That’s where I always shopped. I liked the new linoleum tile floor. The other one had a kind of warped wood floor. Your cart went up and down. I don’t think it was on a slab, probably pier and beam,” said Pat Wallace, a 26-year customer of the store.

Another charming inefficiency was the way long-time JMH courtesy booth employee Doris Price would keep the books. Customers entering the store would see their names printed across the binding of their own personal ledgers. Doris would enter all their charges by hand. Bills were paid in person by customers, who could also have their checks cashed and buy a single stamp if they wanted to. It was a full-time job for Doris who has been at JMH since 1971. Today she does essentially the same job using a computer. It now takes a few hours, twice a week.

Morris Loden is the friendly face at the courtesy booth. Loden retired a few years ago as the business manager of a downtown law firm, or so he thought. A regular JMH customer and West University resident, Loden heard that JMH needed an Administrative Manager, so here he is.

“At first I was in culture shock. Let’s just say the stress level is not the same as that of a major downtown law firm. I’ve heard it said that we used to be a town where everybody sat on their front porch and waited for neighbors to walk by and give them news. But today, JMH is that front porch. It’s the Norman Rockwell of grocery stores,” said Loden.

Loden says loyal customers to this day have a way of supporting JMH partially out of need and partially out of some sense of philanthropy, viewing JMH not as just a grocery store, but as a museum of sorts, to a simpler time.

“I’ve had people call me and say we forgot to include a charge they made. They would say, ‘I have the receipt right here and you didn’t charge me,’ said Loden.

Loden came on board during the tenure of owners Charlie and Janet Wilson. Wilson brought in new cash registers, new scales and computerized accounting, a business move that is hard to argue with, but also hard to sell to customers hooked on JMH’s time-warped charm.

“I felt sometimes like I was running a store that the customers thought they owned and the employees thought they owned it. That didn’t leave much for me to do but pay the taxes and the bills. I was really kind of proud of the feeling of ownership,” said Charlie. 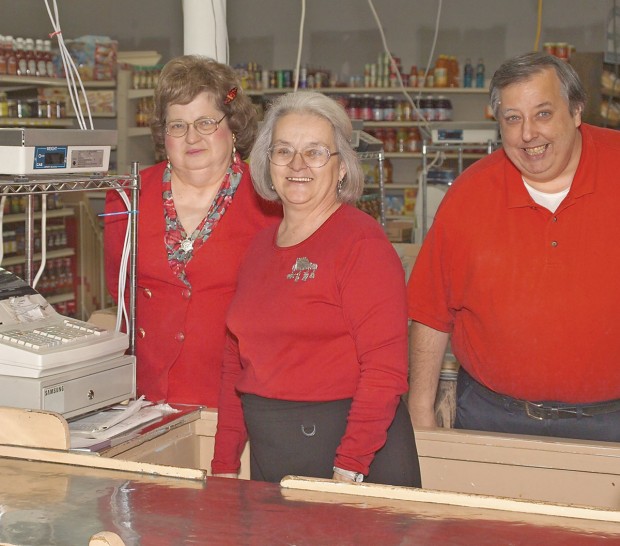 It seemed only natural that the latest decision to buy JMH was hatched in the vicinity of a West University Little League baseball diamond, since kids and parents use the icon as their watering hole between games. Jim Reid, of RabonReid Real Estate Services pulled 17 families together from among the store’s loyal customers.

“We could have had 50 (investors) but we took it on a first come, first serve basis,” said Reid.

Change is definitely in the air. A slightly smaller store, with a separate coffee and ice-cream bar in the style of Starbucks and Amy’s ice-cream will be added along with more specialty foods. Amegy Bank will occupy the back part of the property.  Edloe Street Deli will continue to provide fresh take-home food while more specialty food is coming. The old linoleum floor is giving way to the natural concrete beneath and the original 1950 wooden beams above the ceiling will be exposed for all to see; a reminder that it’s still JMH beneath the surface.

Reid says he recognizes that two ingredients must remain; the charge slips and the 3 checkers, Betty, Vivian and Jimmy. Employee loyalty to owners seems to also be unchanged.

“We are so excited that Mr. Reid is helping to keep JMH. He is doing everything.  He stays after closing hours and mops the whole store. It makes us want to do everything we can to make sure he’s successful. That’s what we have always thought our job was, to make our employers successful,” said Betty.

What a quaint, old-fashioned idea.