A Story of Two Wileys 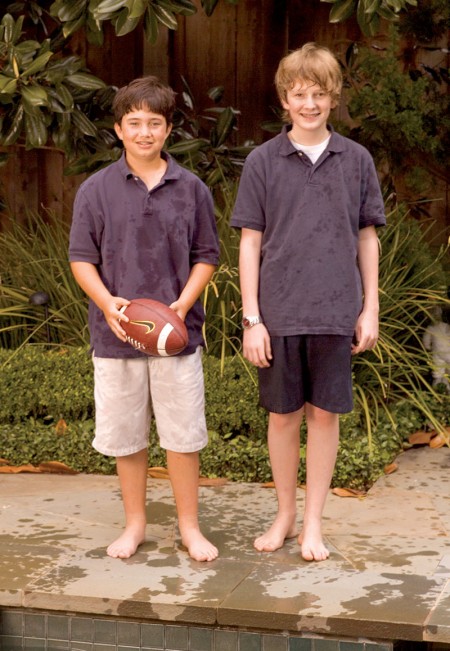 This began as a Mother’s Day story about a family who adopted a boy named Wiley. But it has turned into two stories about two boys named Wiley. Both are in middle school and live within minutes of each other; one in Bellaire, one in West University. Each lost both parents from cancer within months of each other. Both were 11 when the second parent died. Both were only children. Both have come from out-of-state to start a new life with family members in large, busy households in Bellaire and West University. The fathers of each of the new families are partners in large CPA firms. Both boys are verbal and flash sweet tin grin smiles through braces. They spell their name the same. Wiley is a family name for both. But they are two very different little boys linked by similar circumstances that seem to almost rate an episode in Ripley’s Believe It or Not.  The families are just meeting and as of this writing, are just as amazed and surprised as the rest of us.

Friends and neighbors have marveled at Jean Brackendorff’s ability to have a major career with Texas Instruments and raise 3 children in a calm, organized way. Jean and husband, Bo, Katherine (18), Thomas (16), and Patricia (15), have been a typical all-American Bellaire family. But then one day, something happened that was anything but typical. For years the Brackendorffs knew that Bo’s cousin, Tomianne Wiley and her husband, Dall DeWeese, were each diagnosed with different kinds of cancer. The DeWeeses were artsy San Francisco people who worked in theatre and continued to live active lives despite their diagnoses.  They had one child, Wiley.

When Wiley was still a pre-schooler, Tomianne paid her Texas relatives the sad compliment of asking the Brackendorffs to raise Wiley if something were to happen to them. It was a simple verbal agreement only spoken of once between the two mothers. From then on, life would continue as normal. The Brackendorffs did make it a point to have one vacation a year with the DeWeeses. Many pictures were taken with Wiley and the Brackendorff kids.

“I always knew my parents had cancer. They were very open about it. They even told me I would live with the Brackendorffs if something happened to them. But somehow it really never occurred to me for even a minute that it would actually happen,” said Wiley. 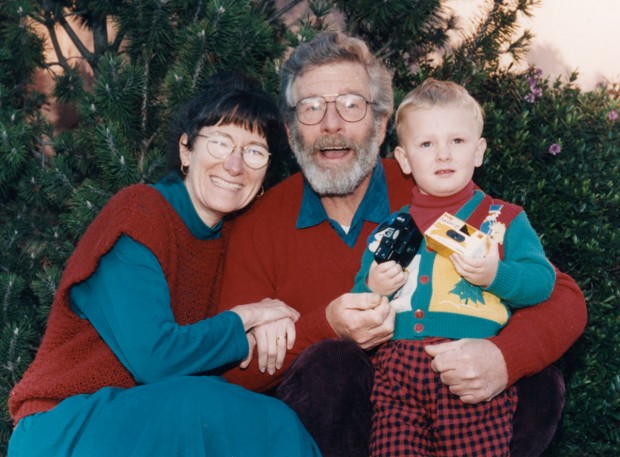 Tomianne Wiley and Dall DeWeese with their son Wiley

Finally, in May, of 2002, Dall passed away. Then, eight month’s later in January of 2003; an ambulance came to pick up Tomianne.  As fate would have it, Jean and Bo happened to be in San Francisco to help Wiley and Tomianne at the same time. Jean, Bo and Wiley were able to spend Tomianne’s last days with her in the hospital.

“I could never have planned that exact time to be there for Wiley. God planned it,” said Jean.

But Wiley, 11 at the time, didn’t return immediately with the Brackendorffs. In keeping with his mother’s wishes, Wiley remained in San Francisco to finish out his school year, allowing for time to say goodbye to friends. Close family friends of the DeWeeses agreed to move into Wiley’s home and allow him some time in his own environment until the end of the school year.

In the meantime, the Brackendorffs had to begin re-arranging their lives.  Thomas and Wiley would share a room. Wiley’s cat, Kitty would be coming as well. Wiley would be the youngest in this new arrangement, just a year behind Patricia.

“I always seemed to get the best advice at just the right time,” said Jean. Jean was advised that Wiley should receive counseling as soon as he arrived and that he would likely resist.

“He did resist. But we said it wasn’t an option. Now he loves it,” said Jean. 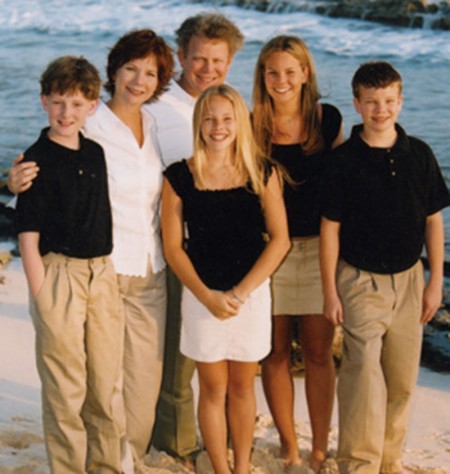 Later, Wiley attended a camp in Richmond, Virginia for children and adults who have lost close relatives. Wiley liked it so much that he went back a second year.

“Going from being an only child to being one of four was the biggest adjustment I had to make,” said Wiley.

“I was used to having a lot of hang time with my mom. I didn’t really have chores because it was easy for my mom to wash 3 plates. I never really cleaned my room either. But Thomas is real neat so I had to learn. It was hard,” said Wiley.

“On the other hand, my mom (Tomianne) was real strict about what I ate. The only bread I could eat was wheat bread. I couldn’t have a soft drink more than once every 3 months. The Brackendorffs are easier about that, but stricter about grades. Also, my parents used to charge me 25 cents an hour for playing video games on a $5.00 a week allowance. The Brackendorffs don’t do that. But now, I can’t just sit down and play anytime I want because someone else might be playing,” said Wiley.

Another huge difference is that the DeWeeses attended the Unitarian Universalist Church, while the Brackendorffs are Methodist. Today, Wiley, who loves Bellaire United Methodist, has recently gone through confirmation.

“They’ve conservatized me. But I’m still a Democrat,” said Wiley.

“Wiley has changed us as well,” said Jean. “We’ve always been a very sports-minded family. But Wiley has gotten us to go to more plays. He is currently learning music from Phantom of the Opera on the piano. He has a beautiful voice. He sang in a boys’ choir in San Francisco and he sings in Houston’s Boy Choir now. He’s reminded us to enjoy the arts more,” said Jean.

Wiley, who is already bi-lingual in Spanish, is completing 7th grade at Johnston Middle School. He hopes to attend the High School for Performing and Visual Arts in either jazz piano or voice.

“Most of my friends don’t know about all this (my past life.) They just think I’m a kid who moved here from San Francisco. But when they do find out they get all nice in kind of a weird way. They act like if they say the word ‘parent’ I’m gonna freak out,” said Wiley.

Rest assured, friends of Wiley, he can take it. He’s handled a lot for his years.  And guess what? He feels really lucky. He’s gotten to see two very diverse lifestyles in one childhood from two great families. We asked him on a scale of one to ten how he felt in his current life. “I’d give it about a 9.”

Wiley said he really feels at least as happy now as he did in San Francisco. As for his newest mom; Happy Mother’s Day, Jean. You get a ten!

“She’s very organized. She prints a weekly calendar and calls all of us to remind us of our schedule. I’m very impressed. She’s in Tokyo on a business trip right now. She has a very good job. You don’t catch her lying around on the couch watching T.V. She gets a lot done but she also keeps her cool,” said Wiley.

Jean worried about going against Tomianne’s wishes in any way in her efforts to raise him.

“I asked Tomianne if she had any instructions for me in raising him. “She said, ‘just love him’ and that answer gave me great peace,” said Jean. It appears to be working. Kitty seems happy, too.

The Story of Wiley McCoy IV
When Wiley McCoy joined the McLamb family, Alyce McLamb suddenly came up with a new name for the 5 children.

“My life was already crazy with 4 kids. What was one more?” 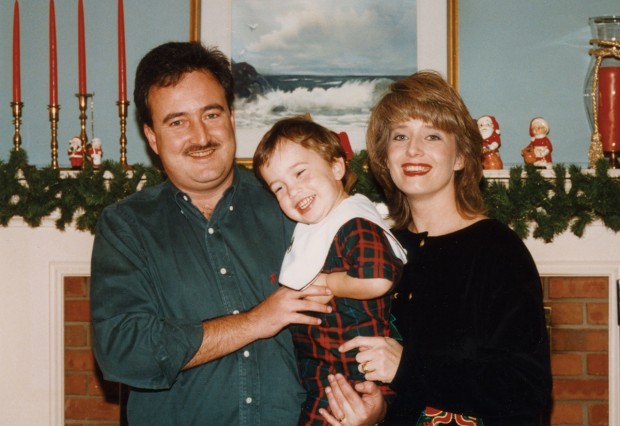 Wiley III and Suzanne McCoy with their son Wiley IV

When Wiley’s mother, Suzanne was nearing the end of a long battle with ovarian cancer, she asked the McLambs to raise her only son if something were to happen to her husband, Wiley McCoy III. It seemed unlikely at the time since he appeared to be in good health. Suzanne passed away in February of 2003.

Later, when Wiley’s dad, was diagnosed with skin cancer his prognosis was good.

“We were told that his chances were 80/20, meaning that he had an 80 percent chance of survival. But a month before he passed away we got the news that he was likely to be among the 20 percent,” said Alyce. Wiley’s father passed away in May of 2004, 14 months after his wife. A month later Wiley, then 11 had to leave his home in Madison, Mississippi to join a busy active West University family as its seventh member.

Since June, Wiley McCoy IV (12) is now the second oldest member of the McLamb family which consists of Tyler (13), Amanda (10), Colleen (8), and Julie (6). Their dad, Bob, is a partner in the accounting firm KPMG. Wiley’s mother was Bob’s sister. Pictures of Wiley’s Mississippi family can be easily spotted in his new West University home, along with pictures of the two families, the McLambs and McCoys on family vacations. Wiley, raised a Methodist, is now joining his new Catholic family and their faith. No longer being an only child, however, is Wiley’s biggest adjustment.

Days are full and busy in the family of Mac kids. Each child has his area of interest. Tyler is a lacrosse and soccer guy, Amanda does karate, Colleen excels at gymnastics and Julie, the youngest for now, likes to sing and dance. 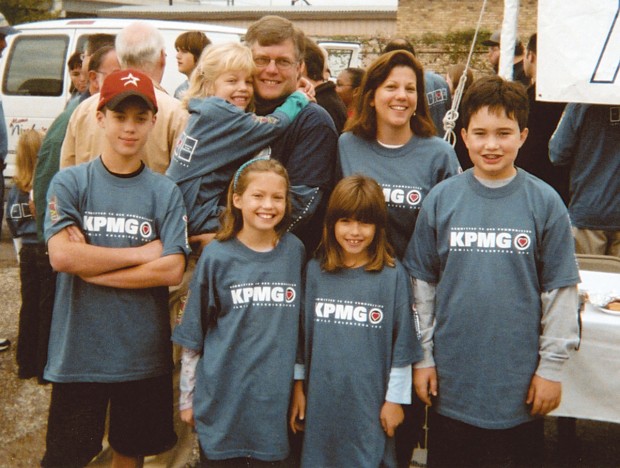 Alyce works hard to see each of her children as individuals. She is currently working with Wiley to help him find his niche. He’s played baseball, football, soccer and lacrosse in his brief time here, getting leaner all the time. He’s also adjusting to all the inevitable rules that go with being in a large family.

“There’s the One Soda Rule. You can have one soda on Saturday and one on Sunday but only before 6 p.m. There’s the Keep the Peace Rule, which basically means don’t do anything to deliberately irritate someone else. And there’s the Homework before T.V. Rule,” said Alyce.

Other times, Alyce declares some or all of the Mac Kids to be in N.E.E.D. which translates to “No Extraneous Electronic Devices” (as in video games).

Alyce says Wiley likes to cook and enjoys helping her in the kitchen. But he’s been reluctant to participate in a regular practice of the family called “group hugs.” Finally, one day in the swimming pool, Wiley said, “group hug” and Alyce, Wiley and two of the siblings did just that. It was a break-through moment.

“I really think he’s thriving,” said Alyce. (Thanks to you, Alyce.)