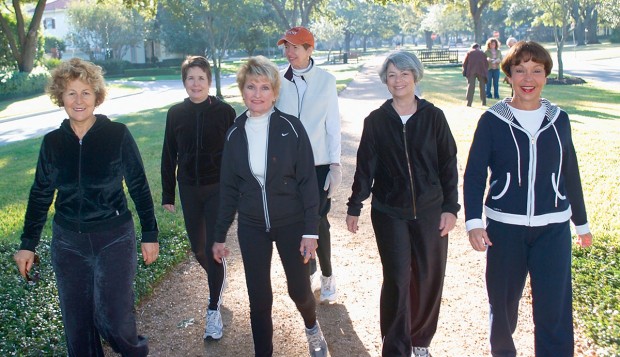 There are few places like it in all of Houston: a recreational esplanade bordered by million-dollar homes, covered by a canopy of well-groomed live oaks. Offering a mile-long stretch of granite pathways and landscaping, Tanglewood Boulevard is one of the most pleasant parks around.

With its pristine garden-like setting where runners, joggers and walkers find peace and solace in the hustle and bustle of the Galleria area, the draw for visitors is obvious. But there is one group of ladies who have found much more than tranquility—they call themselves the “Boulevard Buddies.”

If you’re a regular on the trail, you’ve probably seen them. They meet on the boulevard every morning at 8:15, trekking in from all different corners of Tanglewood. Each one will tell you that this morning routine has been good for their hearts in more ways than just the great exercise; they have forged new friendships that are well on their way to lasting a lifetime.

“I really look forward to it, it’s my exercise and my therapy. I hardly ever miss; seldom do any of us miss. We talk about everything. It’s a great group of girls,” says Carolyn Podsednik.

There are seven of them that are committed to walking four to five miles each weekday morning. They’re a loud bunch; you can always hear them coming. And curiously, most of them don’t socialize together outside of their morning jaunt.

“Which is probably why it works,” jokes Carolyn.

Shirley Pearson has lived in Tanglewood 18 years, but only started walking the boulevard a few years ago and she is glad she did.

“It’s kind of like the old-fashioned coffee klatch; we’re all housewives and this is our time to get together and chat. We talk about whatever is on our mind, we solve problems for each other; we encourage each other. It’s a support group for whatever is going on,” says Shirley.

It’s hard to say when the inception of this group occurred. The core has been together since 2000, while some started years earlier with other walking groups. Jan Nieland has been dubbed the leader of the crew since she was the first to make an everyday commitment and has stuck by it ever since.

“I started in the year 2000; I was having a big decade birthday, I decided I wasn’t satisfied with what I looked like and who I was, so if I was going to turn that around, I was going to do it with a bang,” says Jan. 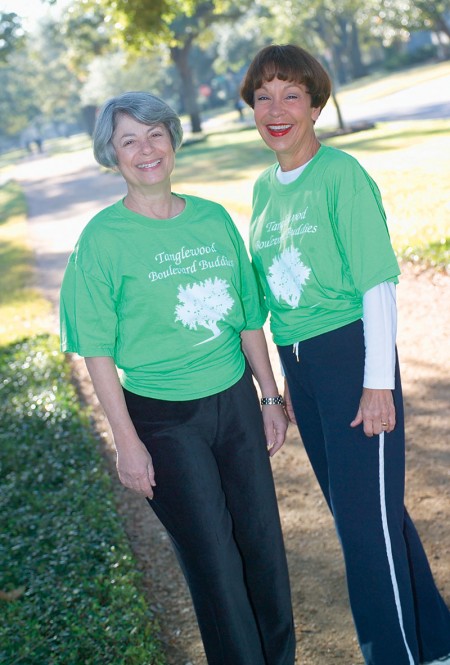 Barbara Shellist is the relative newcomer to the “buddies,” arriving in Tanglewood just last year. She’s been an avid walker for the last three decades, and hit the boulevard in hopes of continuing her healthy tradition.

“I had been looking for days for someone to walk with because it’s so much nicer than walking alone. I was behind Jan and said, ‘I seem to be following you.’ She said, ‘Come on up here,’ and I’ve been there ever since.”

It may be the women’s most social hour of the day, but there is nothing lightweight about their workout. They keep a rapid pace and track four to five miles. By the end, each of them feels refreshed and renewed, mentally stimulated as much as physically.

Kristine Solberg has been there since the beginning. This group helped her survive her two daughters’ weddings last June with a lot of listening and good advice.

“We have lived through a lot of different events together. We’re a real ‘Steel Magnolias’ type group. They’re all wonderful,” says Kristine. “My husband talks about moving to the Lake Conroe area and I just holler and scream because the one thing I will miss the most is the boulevard and my friends. Women need women.”

One event has particularly strengthened their friendship bond; an illness of one of their own. Fellow walker and friend, Julia Padon, was diagnosed with Alzheimer’s. Julia, a Tanglewood resident for nearly 30 years, has always loved the boulevard. And in true friendship fashion, when it came to the point she could no longer walk alone—her friends came to pick her up. Every morning they lead her along the trail, holding her hand, talking and laughing like girls.

Walking in the company of friends along the most pleasant of paths bring a constant measure of joy to each of their journeys. These Boulevard Buddies get a daily reminder that the finest blessings are often the simplest.