Umpire Randy Bullard safe at home in West U 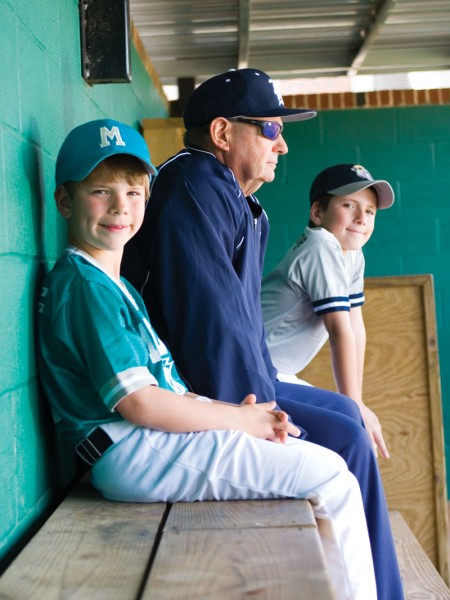 If you ask Randy Bullard how long he’s been part of West University Little League, he’ll give you a big grin and pull your leg. “Mother told me I was born in the springtime. I actually believe I was here in a previous life. Two thousand years—that’s close enough.” His genuine smile indicates that he’s only half kidding.

Randy has been with West University Little League so long that in 2002, a Pee Wee field was named in his honor. Hugh Tanner, who was on the board at the time, says that “the decision to name a field after Randy, who has given so much to the community, just seemed right.”

Credit for the idea of naming Bullard Field goes to Scott Burdine, who was president of WULL when the vote took place. “I was fortunate to get to know Randy when my son, Brian, who’s now 18, first played in the Tadpole division,” Scott says. “His positive nature is contagious, and by his example, our children are taught about sportsmanship and character. Randy is more than an umpire. He’s our teacher, role model, and friend.”

On April 20, “Hometown Hero” Randy will serve as honorary chair of the 2007 Legends of Baseball Auction Gala. Proceeds will be used to rebuild Bullard Field, which was demolished during the expansion of West U Elementary. Gala co-chair Lisa Heim says this is the first time the auction committee has named an honorary chair. Though he’s sheepish about the honor, Randy agreed to make an appearance “to hear what they have to say.”

Because he spends so much time umpiring, few people are aware of Randy’s background in law enforcement and education. He teaches evening business law classes at Brazosport College, a job he accepted because it allowed him to care for his aging mother during the day. Although she has since passed away, he continues to teach. While earning his law degree, he also worked a night shift with the Houston Police Department DWI Task Force.

Even then he didn’t give up baseball. “My shift didn’t start until 9 p.m. so I could still come home and get a few hours of sleep, get up and call a couple of games. It’s an obsession,” he admits with a smile. 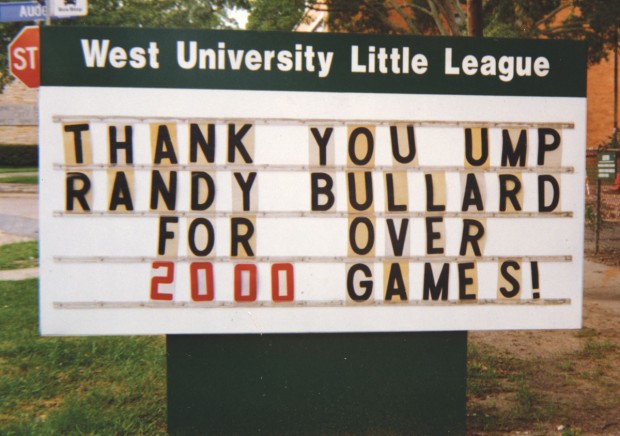 The West U community shows their appreciation of Randy Bullard’s contribution to West U Little League.

Randy and his wife, Lynn, have been married for 30 years and have one daughter, Dawn. He claims that their courtship consisted mainly of Lynn watching him coach River Oaks Little League games. “For variety, I’d take her down to Galveston and do some fishing,” he jokes. “I thank God every day for her,” he adds, more sincerely. “She could have done much better!”

In addition to umpiring, Randy’s renowned for his pecan-smoked barbecue, sold every Fourth of July to benefit Challenger Football, a cause supported by West University Rotary Club. “Kroger and Randalls donate the beef, JMH lets me store it in their cooler, and Jim Goode donates the barbecue sauce,” Randy says. Though he lightheartedly calls himself “the community beggar,” the truth is that Randy Bullard has a lot of friends—and they all think the world of him.

Edward James has coached three of his kids through Pee Wee with this Hometown Hero. “Generations of children instantly know who you’re imitating when you say, ‘Foul ball now!’ ’”

“I remember Randy driving me to the hospital from the Wallin Ranch after I was thrown from a horse and broke my arm,” Drew Grams recalls. “He put me in the back of his old pickup truck and asked how I was doing every seven seconds through the back window!” Drew says Randy taught him to work hard, treat others with respect, and have fun. Now Randy is making an impression on Drew’s two boys. “I’ve learned that it doesn’t matter if you’re out or safe,” says Michael, age 8. “Just do your best.”

Robby Winston remembers Randy as a kind and gentle man off the field, “but when he raised his voice on the field, you knew who was in charge. Three years ago, Robby introduced his son Jimmy to Randy at Bullard Field. “I hope he’s lucky enough to learn as much from Randy as I did.”

Everyone who knows Randy Bullard values his friendship. “I always look forward to seeing Randy’s truck come down my street,” Hugh Tanner says. “I know he’ll stop, as he always does, and I know I’ll laugh at some funny joke or story he shares. The visits last just a moment. But—like the man who rolled down his window to say hello—they’re very special.”