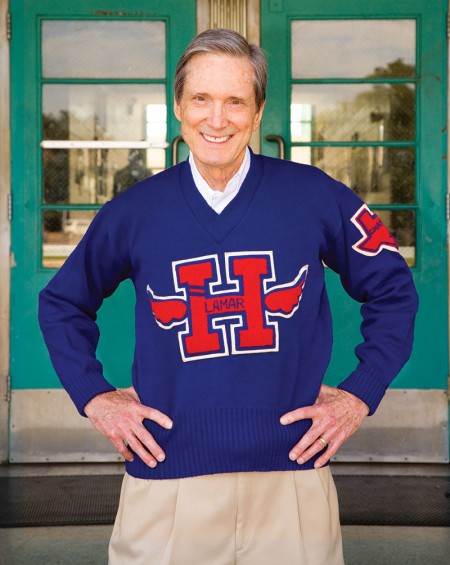 Fred Hofheinz, Lamar class of 1956, can still wear his Lamar sweater with its track team and state championship patches. He still runs 3 to 4 times a week. (Photo: www.andrewsphoto.com)

What were you doing in 1937? Older Houstonians may recall that Houston was growing and Lamar High School opened its doors that September to help the overflow of other popular high schools.

After 70 years, Lamar can boast many distinguished alumni. Two Houston Ballet soloists, actors, directors, philanthropists, politicians, and some of Houston’s top business leaders are just a few of its notable graduates.

Houston’s mayor from 1974 to 1978, Fred Hofheinz, graduated from Lamar in 1956. During Fred’s school years there, his father, Roy Hofheinz, was mayor. Fred sums up happy years at Lamar this way: “Lamar holds wonderful teenage memories of school activities, school athletics, and beautiful girls.” Another fond high school memory is being on the track team, which won the Triple-A State Championship in 1956. 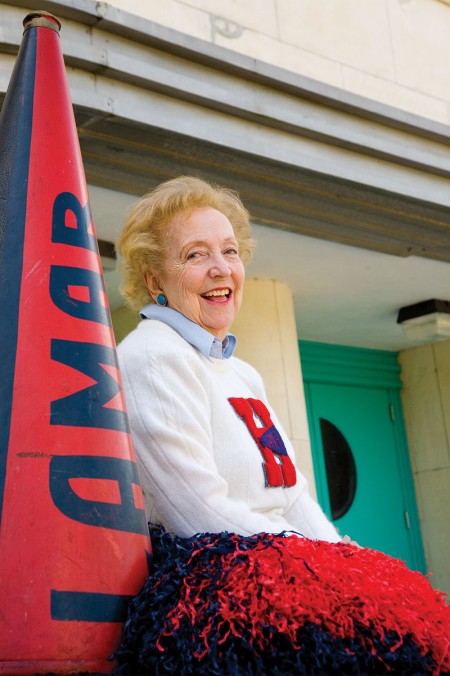 Grace Picton Wise, class of 1939, was the first of four sisters who graduated from Lamar. Grace shows off her cheerleading sweater that she donated to the school. (Photo: www.andrewsphoto.com)

“Lamar was an enjoyable place to go to high school,” recalls Carol. “We had a lot of fun. In my day, there was no air-conditioning, TV, or video games. We depended on the school for all our social activities.” Carol and wife Carolyn were not high school sweethearts, although they graduated from Lamar the same year. They met again at UT and have been married now for 52 years, boasting five children and 14 grandchildren.It appears many of Lamar graduates are fastidious about keeping in touch. Ed Keyser, 1941 graduate, formed the “Forty-Oners” after his 20th reunion. “The men of ’41 decided we did not want to wait five years or more to see one another, so we formed a lunch club that meets once a month. We have not missed a month since 1961,” he says. “We seem to get closer as we get older.”

Some in the Forty-Oners come from as far as New Braunfels and Seattle to attend monthly, while some members travel miles to pick up members who no longer drive.

Class of 1939 graduate Grace Picton Wise had the privilege of entering Lamar in its first year. Today, she attends alumni events and keeps in close contact with Lamar friends Maybelle Smith Harris and Betty Ruth Robbins Tomfohrde. “Being among the first was very exciting. We got to choose our school mascot, colors, the name of our yearbook,” she says. Very active at school, Grace was student council president, a cheerleader, and a May Fete Princess.

Marilyn Graves Lummis, class of 1950, recalls the excitement of the May Fete, where the prettiest girl was picked as May Fete Queen. “The queen had a court, with a duchesses and princesses who paraded down the aisle in the auditorium with their hoop skirts, and then we had a great big dance in the gymnasium,” says Marilyn, recalling her favorite May Fete dress was a black number that looked like Audrey Hepburn’s.

While there’s no longer social events like the May Fete dance, principal James McSwain encourages students to get involved in Lamar’s many clubs, activities, and sports teams.

Some things remain the same, no matter how many years march by—the sounds of happy chatter in between classes, the wax-polished stairwells and corridors, and the many successful graduates that the school continues to produce.

Editor’s note: Lamar invites all teachers, alumni, and parents to attend a 70th anniversary event on November 3 from 10 am to 2 pm. For information, e-mail [email protected].