A Wii Bit of Fun 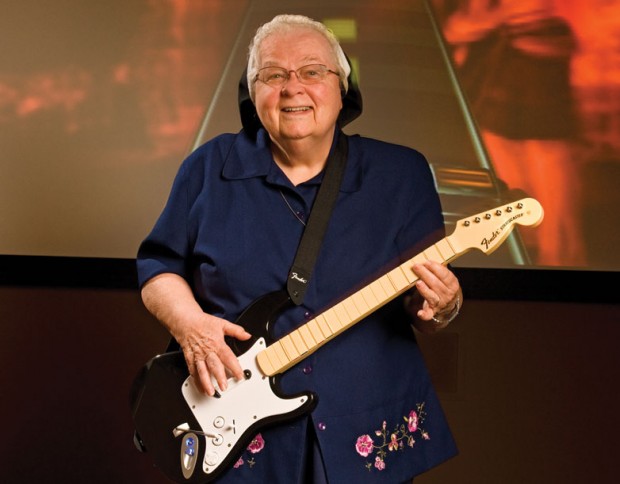 Video Games. Rock ‘n’ roll. Dancing. Sports. Each are thought of as child’s play, but an older generation is finding new life in the activities of their youth. We assembled a group of 10 Buzz readers over 50 to try out Nintendo’s new Wii system and prove there’s no age limit on a good time.

She’s the last person anyone would pick to rock it out. Sister Jean Marie Guokas took time out from keeping the kids at St. Vincent De Paul in line to prove you should never underestimate the power of the game.

“The family is all microwave meals and going here and there,” she says. “This is a way to get the family together. Get them off the couch and stir up the adrenaline.”

The good sister is just one of many discovering video games are not just for kids and are finding a new market in an older crowd.  She says she wants to get one for the convent to help her fellow nuns. 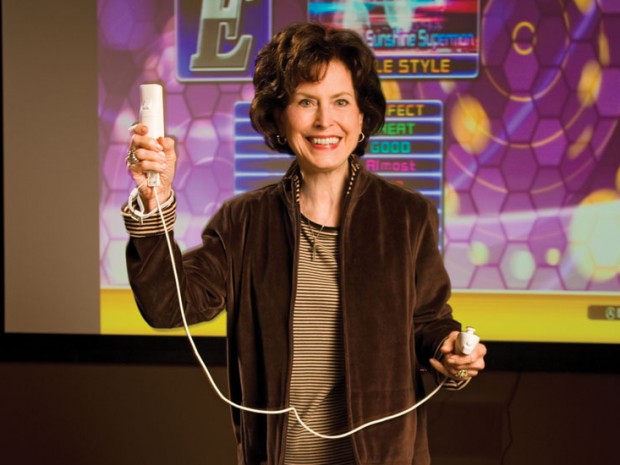 This is one lady that has shaken off any idea of retirement. Annette Duggan still heads to her interior design business every day. She is just one in the 50-plus generation refusing to hop in to a rocking chair and wait for the golden years.

“This game is much more fun than a treadmill or bicycle,” says Annette.  She says a friend uses the games as a part of physical therapy.

“A lot of my friends are doing interesting and fun things,” Annette says, “they are not just staying at home.” 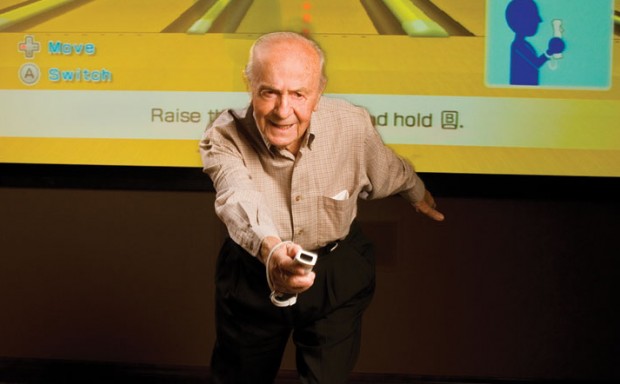 “We have a senior league where the age starts at 60 and goes on up,” says Harry. “I think I am one of the oldest, but there is a lady that goes with me who is 94.”

It is no surprise once Harry got the hang of the Wii bowling lanes, it was all about the strikes! 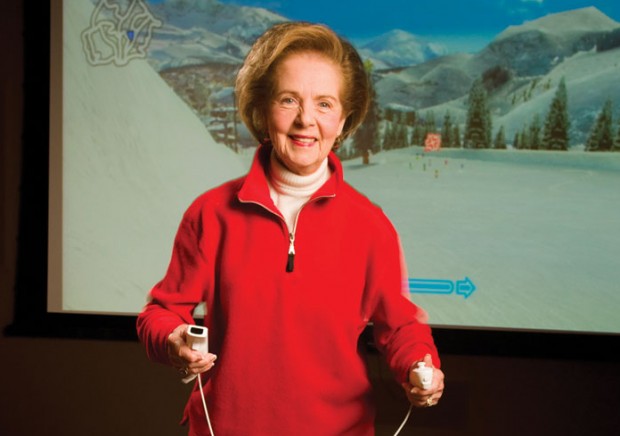 To get prepared for the Wii experiment, Diane Hale went to an expert – her grandson, Alex. “We bowled,” she said. Diane admits he was getting strike after strike, but laughingly claims “after a few minutes I made a few strikes.”

This time she decided to give skiing a try. A few minutes on the virtual slopes and it was clear Diane was soon to be a pro. 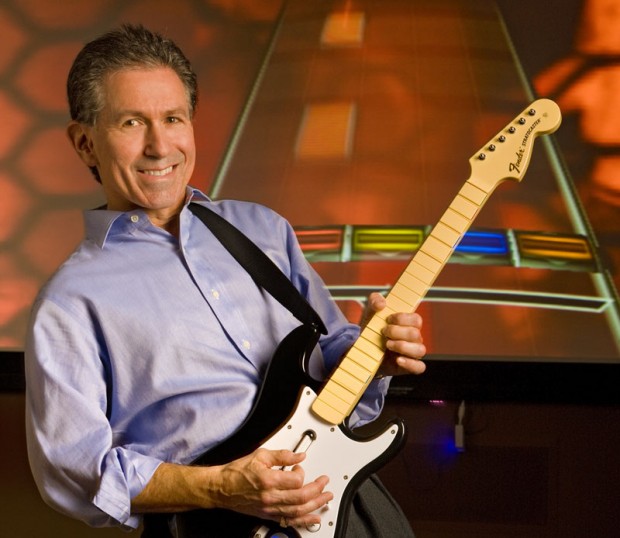 It may not be about late nights, smoky concerts, and partying anymore, but don’t count out the bad boys of rock just because they are getting a little grayer.

“Age limits are something you impose on yourself,” says David. “Why would you quit if you can still play guitar?”

An orthodontist by day, David Wadler is a rocker by night. As a member of Midlife Crisis and the Hot Flashes he proves you are never too old to rock ‘n’ roll. 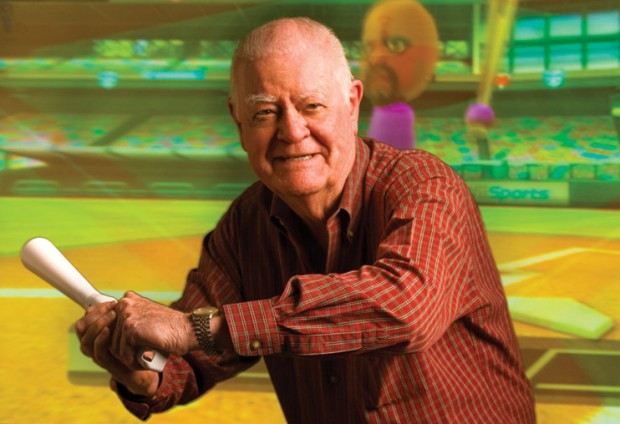 For our challenge, Judge Tom Sullivan gave baseball a try. “It was a little bit addictive,” says Tom. So much so he wanted to keep playing. “I am still curious how it works. What goes on in the machine?”

To say Tom Sullivan is retired would give the impression the former Harris County Judge had stopped working. He hasn’t. “I sit as a visiting judge and do mediations.”

Tom says he doesn’t see a game system in his future, but the fact that we had to pull him away from the game long after shooting was done could mean his mind is likely to change. 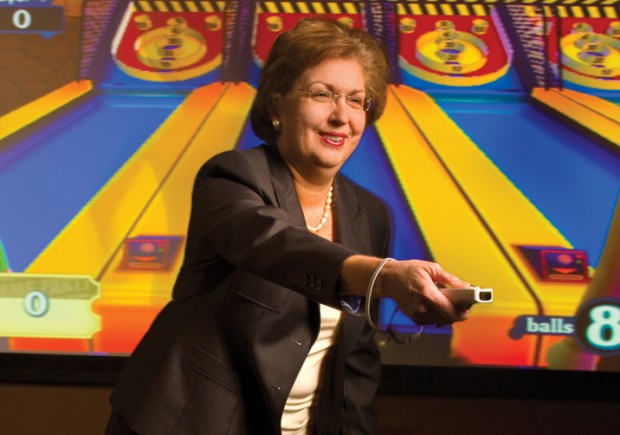 The sunset is far from Dianne Johnson’s game plan. Like many of her friends she says she is living a second life. “I had a friend who turned 50 and decided to climb mountains,” says Dianne. “I decided to run for the Houston school board, which is a another kind of mountain.”

Taking time out for fun is also a part of this new life. So is trying new things, like a skee ball video game.

“There are a lot of us that want to do new and different things and needlework and rocking in chairs are not two of them.” 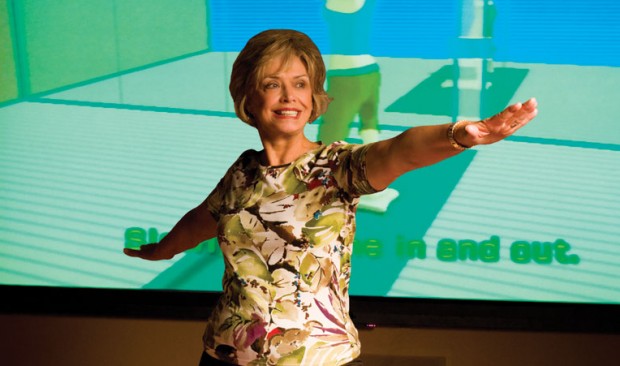 If you are looking for couch potatoes don’t ask Lorelei Sullivan; she and her friends are too busy to know any. “They ride horses, motorcycles,” she says. “They swim, do water aerobics, jog, and yoga.”

Striking a pose for our shoot, Lorelei says there is an emphasis on youth and it’s not such a bad thing.

“I think we are healthier. We all want to stay young and are far less likely to admit we can’t do it anymore so we continue to try, and it’s fun, the trying is fun.” 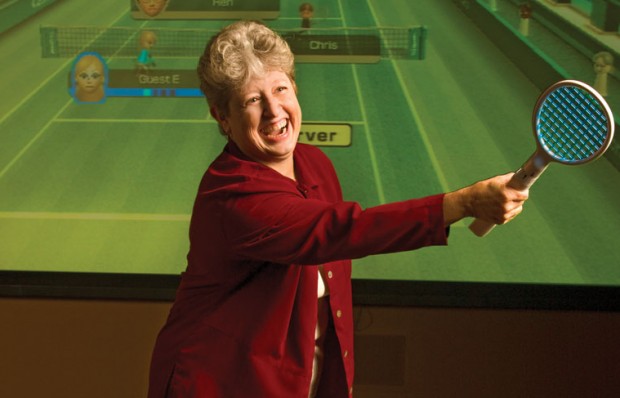 It didn’t take much pressure to get librarian Mary Alford Cohrs to step away from her books to give a virtual tennis game a try.

“It brought back memories,” says Mary. “Memories of fun times, competition among friends, and good times.”

In fact, Mary says it was so much fun, she found herself talking to the game. “It could go beyond the game and become a social event.”

Mary says like other libraries, Bellaire should have a Wii system of their own by spring.  So be on the lookout for those social events. 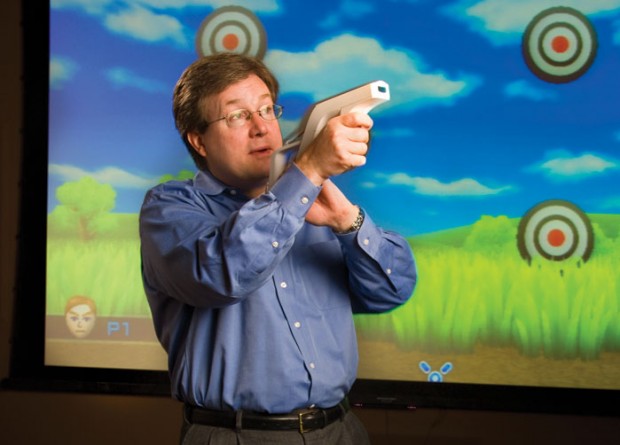 The thrill of a sport like hunting comes from the chase and, in the end, hitting your target. Pastor Scott Endress of Chapelwood United Methodist Church took a turn on the Wii duck hunt and found it’s a little bit like the real thing.

“I want to get it now and start working on it, because I know I was no where near as good as I could be,” he said.

Like Scott says, few things make you feel more youthful than challenging yourself to conquer something new. “It is just amazing what folks can do when they take the time.”

Editor’s Note: A special thanks to Meyerland GameStop and Electronic Dreams in Bellaire for their assistance with our Wii photo shoot.