Knowing When to Say Goodbye 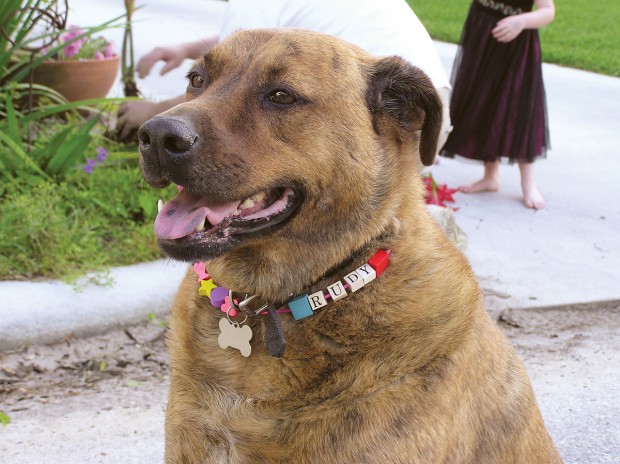 Rudy, pictured a few years ago when he was healthy, is comfortable enough for now. But his vet has advised his owners to note if he stops barking at the mailman and doing other favorite things.

Our dog Rudy lay sprawled on the exam table. It had taken both the veterinarian and an assistant to lift him. He was arthritic and awkward.

His brindle-striped coat was shedding, and he was panting, as usual. He turned toward my voice as if to listen, even though he couldn’t see me. The diabetes that required twice-daily insulin shots had claimed almost all of his eyesight.

For 13 years, Rudy, a black mouth cur (like Old Yeller in the Disney movie), had surprised me with how gentle and knowing he was. I hoped he didn’t understand our words right now.

Dr. Nick DeWees at Chestnut Animal Hospital and I were having “the talk.” We used words like “sleep” and “let go,” as if Rudy might understand the word “euthanasia.”

I’d had to make that decision before with all sorts of pets. My horse was especially hard. With an animal that big, you have to plan the gruesome mechanics. We had to dig a giant hole with a tractor and lead her up next to it. There was no subtlety.

Truth is, I didn’t stay when my horse was given that lethal injection. You don’t want to remember this elegant creature that way, my vet said. So my husband and friend watched in my place. I love them for that, and I’ll never let them tell me exactly how it happened.

Rudy has some time with us still, and I hope to stay with him at the end. I know many owners insist on it.  “There is something about these sacred passages of birth and death. I think you really are a comfort to your animal when you are there,” said Mary Grimord, who euthanized her boxer, Lucy, when Lucy’s kidneys failed.

Steve Smith, owner of Rover Oaks Pet Resort, was able to get a vet staffer to come to his house when it was time for his two German Shepherds to go. He let his other pets sniff their buddies before and after. He said the moment of death was quicker and more peaceful than expected.

Dr. DeWees and Dr. Heidi Hottinger, a surgeon at Gulf Coast Veterinary Specialists, said today’s euthanasia drugs cause near-instantaneous, painless death. Some vets give a sedative first to lessen involuntary body movements such as gasps, but that is mostly for the owner’s feelings.

But before all this, owners must tackle the toughest decision – life or death for a creature they love dearly.

Eventually, a failing body will fail on its own, with no medical help. But death can be long and agonizing.

“They have the opportunity for a very dignified death, whereas humans are not always granted that opportunity,” said Dr. Hottinger.

But even when you have decided that, yes, you will euthanize your pet when it comes time, the question remains: When is it time?

“Most people think that if a pet is eating there’s nothing really wrong with them. That couldn’t be farther from the truth,” said Dr. DeWees.

Quality of life, he said, is more important than length. But pain is hard to diagnose. He suggested making a list of the things your pet always has loved to do: chase a ball, play with string, bark at the mailman, ride in the car, etc. Has that list gotten shorter? Much shorter?

Also, be honest about whether your pet can take care of basic needs with dignity. Does he eat and drink on his own, with the ability to relieve himself in the proper place? Can he stand up and walk?

“I’ve heard of people who take their cats back and forth to the litter box. But that can’t be much of a life,” said Cathy Oliver, who adopts older cats.

“The comment I most often hear from clients after they’ve had the time to reflect is ‘I should have done it sooner,’” said Dr. DeWees.

“I’ll never forget the moment I realized,” Smith said about his female German Shepherd, Fresca. She squatted to urinate and fell over. Then she tripped over a tiny threshold. “I looked at her and went, ‘Yeah, that’s it.’”

The Houston SPCA offers free euthanasia services and recommends consulting with your vet. The shelter also has a monthly Pet Loss Support Group.

As for our Rudy, we get to put off the inevitable a little longer. But when the time comes, I may re-read Garth Stein’s novel, The Art of Racing in the Rain, a family’s story told through the eyes of their dog.

“When a dog dies,” it goes, “his soul is released to run … in fields that have no end.”

That doesn’t sound so bad.