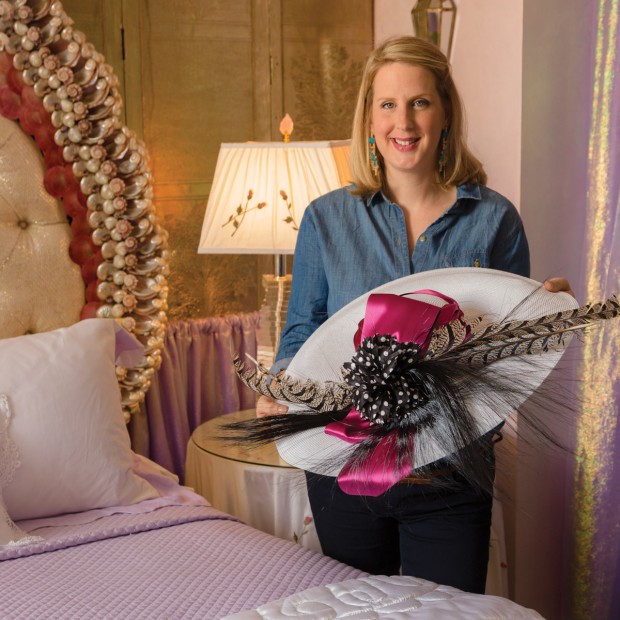 Alison Prouty, pictured with her grandmother Patricia McMahon’s hat, was taught never to set a hat on the bed, unless you want bad luck. (Photo: hartphoto.com)

We’re going to tell on the boss. Not too long ago, Buzz publisher Michael Hoffman was leaving the office. Passing by a ladder in the hallway, he felt a little uneasy but kept walking. He made it nearly across the parking lot before he turned around, retraced his steps, passed by the ladder again in the opposite direction to undo any potential bad luck, and departed through a different door.

To be fair, lots of us feel uncomfortable about opening an umbrella indoors or breaking a mirror. That second one brings you seven cruddy years. Have you knocked on wood? It’s a pagan thing – drive out those naughty tree nymphs before they make an unfortunate suggestion a reality. Surely a few modern parents have buried their newborn’s placenta under a fruit tree to bring strength and good luck to their baby.

Ancient Egyptians placed eye symbols on their dwellings to ward off evil. And Houston would have been considered a lucky city indeed for ancient Scandinavians who believed acorns and oak trees brought good fortune.

With the year 2013 upon us, anyone who suffers from triskaidekaphobia, the fear of the number 13, is surely feeling a little uneasy right about now.

But, as the recent beer commercial says, superstitions and good-luck rituals are only weird if they don’t work. Here’s what your neighbors are doing to bring good luck in 2013:

For mother-of-two Alison Prouty, adhering to superstitions in her household is just “having good manners.” Her mother, Patricia Kennedy, taught her to avoid bad luck in a number of ways. Never put a hat on the bed. Never put your purse on the ground. Never, ever take salt from someone’s hand at the table. Let them set it down and then pick it up.

“It’s just ingrained in me. I don’t even think about it. I don’t think it’s weird. It’s just what you do,” said Alison.

Alison’s husband Ted, an attorney, wasn’t raised in a superstitious household. He teases his wife that “being superstitious brings bad luck.” But he goes with the flow.

“I think about Ted not being superstitious and then marrying me, and all of sudden, he’s not allowed to put a hat on the bed,” said Alison, “but he adheres to everything, like the passing of the salt, and putting it down first at the dinner table.”

While on a recent walk in the neighborhood with her 2-year-old twin boys, a black cat crossed their path, so she did what any smart person would do – she spit on the sidewalk. “I’m sure if my neighbors saw me, they thought it was so weird,” said Alison.

“All of my friends throughout the years have known that I have this quirky part of my belief system. They all question me when I do something superstitious and say, ‘Is that something your mom told you to do?’”

For some, good-luck charms have a spiritual meaning. Bellaire dentist Lily Chen and her office staff were given small trinkets and Buddha charms, blessed by a monk, in exchange for free dental work. “They are something we cherish because they are blessed by a higher power. I believe they will bring us happiness, peace, and hopefully good health,” said Lily.

She also carries in her purse charms and a small pin given to her by her late grandmother for good luck when she was a young girl in Taiwan.

“Years ago, my friend Jennifer visited a temple in Japan and brought back a charm to put on my car for good luck in driving. At that time, I kept getting in minor car accidents,” said Lily.

Since she has hung the charm on her rear-view mirror, she has had no accidents. “Psychologically, it feels good to have extra protection and extra blessings,” said Lily.

Another dentist, Steve Benson, is a little more skeptical. “I don’t believe in superstitions. I believe if you live the best life you can, that luck follows.”

On the other hand, he does carry one good-luck charm with him at all times. It’s a 1985 $100 bill that his late father carried with him until his passing in 1997. “I think he carried it with him just so he wouldn’t ever run out of money,” said Steve.