His First Marathon Was in Boston 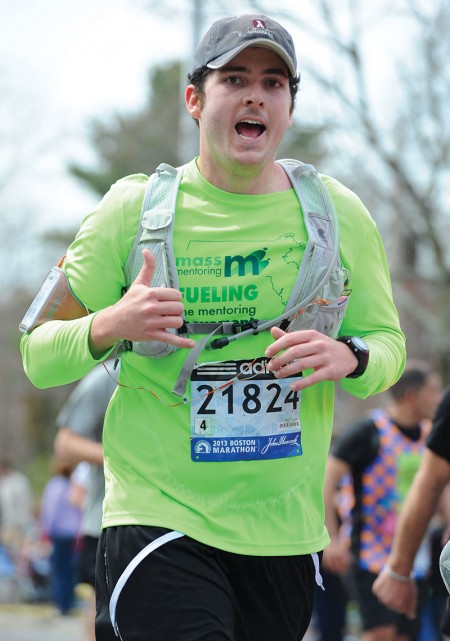 Alex Brown, who attended Strake Jesuit, Spring Branch Middle and Hunters Creek Elementary while growing up in Houston with sisters Shelley and Carley, made it almost to the finish line of the Boston Marathon before the bombings halted the race.

Alex Brown’s journey to his first marathon was birthed in personal sorrow and ended abruptly, on Boston streets, in the sorrow of others. But in between those sad bookends, and later as well, is a happy story.

Alex, now 26, grew up in Houston, the son of banker Allen and teacher Patti Brown, and played football at Strake Jesuit. He was 6-foot-4, the right size for a lineman, an outgoing, clever sort, the youngest of three, an Eagle Scout. He played college football until he was injured and transferred schools to study filmmaking. At 24, he found his dream production job in Los Angeles on the popular show The Walking Dead. Life was good. Then, one year ago, his grandfather died, and Alex was grief-stricken. As a pallbearer, he could feel how heavy his grandfather had gotten. He looked at himself and feared a similar trajectory. “I joined a gym literally the day I got back,” he says. “I weighed 285 pounds.” He dieted and worked out. But the weight wouldn’t come off. A work friend told him she jogged 3-4 times a week for 45 minutes. He laughed at the idea. He had always despised running. But he agreed to try. His first time, he ran 3.5 miles in 45 minutes. “It sounds corny,” he says, “but it was an epiphany. I honestly didn’t know I could jog.” That night, he set a goal to run a half-marathon (13.1 miles) and lose 20 pounds in three months. “I trained really hard even though I didn’t know what I was doing,” he says. “When I crossed the finish line, it hit me hard, just this overwhelming sense of accomplishment.” He declared his next goal was a marathon, 26.2 miles. He said, half-jokingly, that the family needed to schedule a family reunion in Boston, where his oldest sister Shelley lived, because he was going to run in the Boston Marathon.

The prestigious and grueling race with hills was no place for a first-timer. Also, he had to qualify, which would never happen. Then, Shelley found a way in. He would raise thousands of dollars for a Massachusetts charity called Mass Mentoring. He did it. At this point, he weighed 255 pounds. He needed to lose 30 more pounds in four months. That meant no beer, no bourbon and lots of running, around reservoirs, on streets, on treadmills. He loved Sunday – laundry day, no running. Sometimes he’d get off work at 11 p.m. and go run 9 miles. He kept waiting for someone to say stop, but nobody did. Along the way, he began to feel he might make it. “Every single day, multiple times a day, I saw myself crossing the finish line.” Race day in Boston was perfect. His mom, who had asked her friends to pray for Alex’s safety, was so happy the whole family was together. They stayed at his sister’s apartment close to the race route. Alex was motivated by happy strangers high-fiving him. He usually wore headphones, but he left them off so he could hear the crowd. He kept running, and finally he made it to the top of the killer Heartbreak Hill, at mile 20-21.

Then, around mile 23-24, his phone went crazy with texts. “Are you okay?” friends were asking. Finally, he answered a call. His sister told him there had been a bombing. He kept running. Finally, at mile 25.6, the police stopped him and the remaining runners. They said a second bomb had gone off. “You need to get out of here and find your families. The race is finished.” “I tried calling my family. All of the phones are dead [a security measure]. I am panicking. I just started running down Mass. Ave toward my sister’s apartment.” As he ran, his mileage beeper went off: 26.2 miles. The distance of a marathon. Finally, he met his family at the apartment. All of them were raw and relieved. They turned on the news. With the deaths and injuries, Alex felt guilty for being angry that he hadn’t crossed the finish line he had visualized for so long. Once home, he tried to round up friends to drink those long-delayed beers. Nobody said yes, so he went to his home, feeling dejected. Then he got a call telling him to come outside. He found his friends gathered there. They said, “Run your last half mile.” He started running. When he got back, there was a finish line, with signs, streamers and champagne. Alex already has signed up for his next marathon. 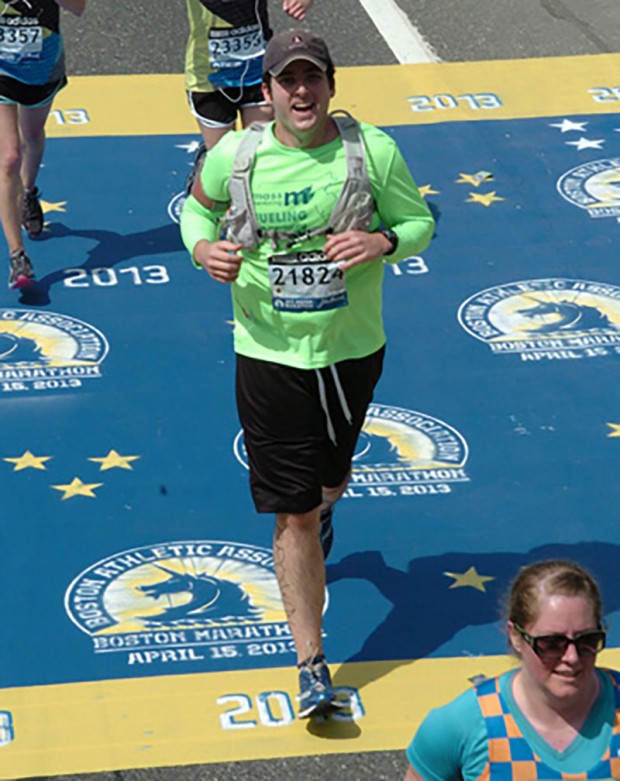 The Boston Marathon is prestigious and grueling, a challenging choice for Alex's first marathon. 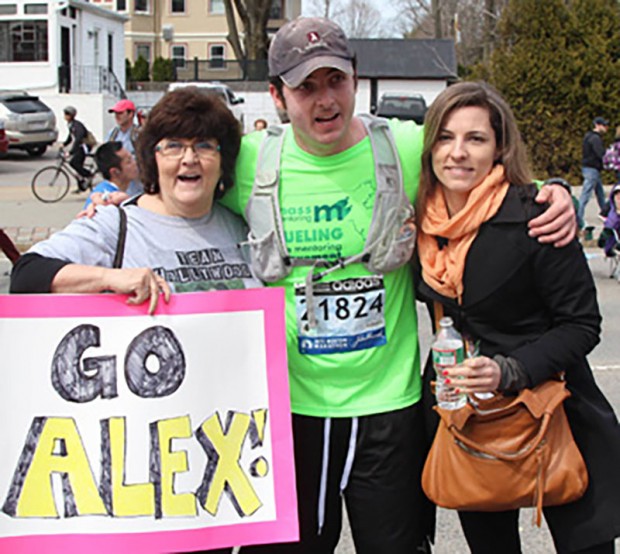 Patti Brown traveled from Houston to cheer on son Alex. The family stayed at the apartment of Alex's oldest sister, Shelley, who lives in Boston.