Sign in to buzz me about Todd Freed
Click the Buzz Me button to receive email notifications when this writer publishes a new article or a new article in this column is published. 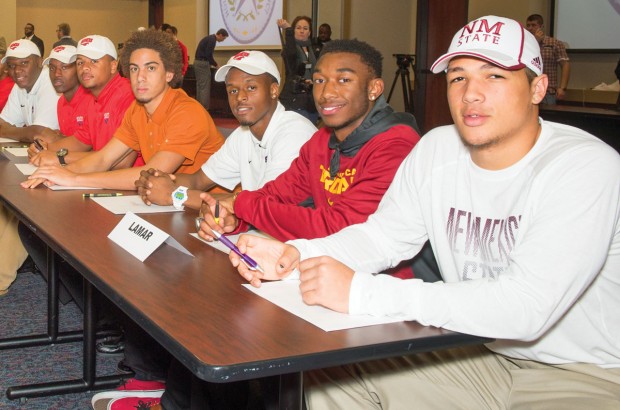 National Signing Day amounted to a magnificent day for the Lamar High School football team, with eight players signing their official letters of intent to play at the highest level of collegiate football. Four of the signees – Darrell Colbert, Braylon Hyder, Kyran Mitchell and Shelby Walker – will play for the Southern Methodist University Mustangs.

“The coaches at SMU respect our winning tradition here at Lamar,” said player Colbert. “We have great talent and coaches at Lamar, and that’s why you’re seeing so many of us moving on to the next level.” In addition to the SMU signees, Ira Savage-Lewis signed with Baylor, John Plattenburg is going to USC, Brandon Agomuo is heading to New Mexico State, and John Bonney signed with The University of Texas. Bonney’s signing was especially big for Texas in the wake of reports that the highly touted defensive back was considering a switch to Auburn or Baylor. “The last couple of days were pretty stressful,” said Bonney. “But I really like new head coach, Charlie Strong, and the idea of being part of something special at UT. It’s been a life-long dream for me to play at Texas.” The eight Division 1 signees for Lamar is more than any high school in all of Greater Houston. “It was an incredible class of players, and we’re going to miss those guys,” said Lamar head coach Tom Nolen. 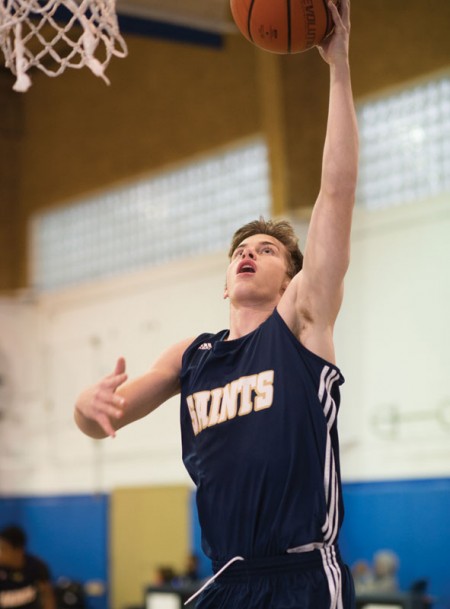 In basketball, with big wins over The Woodlands Christian and Cypress Christian to close out the regular season, St. Thomas’ Episcopal captured its TAPPS-3A District Championship with an undefeated 12-0 record in district play. In addition, with an overall 23-9 record, STE entered the playoffs as the state’s No. 3-ranked small private school. “We’ve been playing really well, despite playing a bunch of freshmen this season,” said head coach Chris Twine. “We played a really tough non-district schedule against some good public schools, and that helped us out at well. One of our big non-district wins was against Wichita Falls by 10 points. We also beat state-ranked Bay Area Christian by 28 points and Lutheran North by 20 points.” Twine had high praise for his five starting players, including Isaiah Specks, son Chase Twine, James Masterson, Ehi Airwele and J.T. Williams. “It’s a really strong group. Isaiah is a 6-4 power forward who averages 21 points a game. Chase averages 14 points per game, and he’s only a sophomore. Also, James and Ehi average about 12 points a game, and J.T. is our junior point guard who averages eight points and five assists a game.” With that kind of talent, Twine has his sights on duplicating last year’s success in the playoffs. “We made it all the way to the state Final Four for the first time in school history last year, and that was a pretty great deal for our school.”

With a talented and experienced lineup, the Memorial Mustangs girls soccer team has high expectations this season. “We’ve got 14 returners, including 10 seniors, so we’re pretty excited about our prospects,” said Mustangs head coach Lindley Amarantos. The Mustangs certainly were off to a promising start by finishing second in the I-10 Shootout soccer tournament, which brings many of the region’s top teams to Katy each year. “The girls played well,” said Amarantos. “It’s a great tournament, so we’re pleased to finish second.” 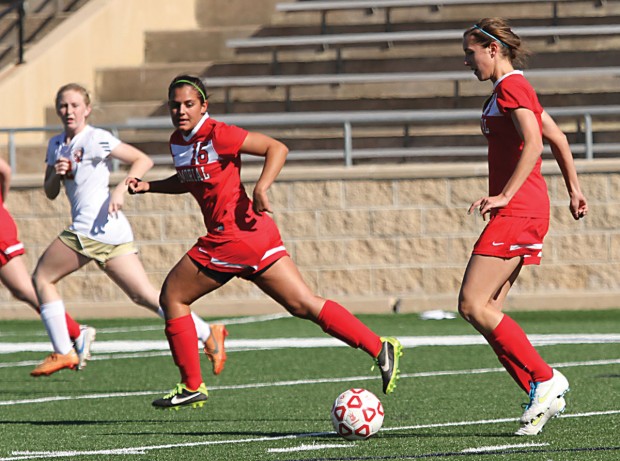 With the return of several outstanding seniors, including Lanie Russo (left) and Olivia Wood, the Memorial Mustangs have their sights set on another successful season.

Among the key starters returning from a team that advanced to the third round of the playoffs last year is senior midfielder Lanie Russo. “Lanie is a dynamic player. She controls the middle and can really change the game.” Also, senior Leslie Bonner, who’ll play college soccer at Texas Christian University is back for the Mustangs. “Leslie’s a powerhouse,” said Amarantos. “She’s extremely strong and physical. In addition, Amarantos had high praise for senior forward Olivia Brook, as well as senior defender Maggie Sherwood. “Olivia is one of the fastest players you’ll see on the soccer field. She’s signed to play at Texas. Maggie’s just a great defender. She is extremely consistent game in and game out. “I expect us to fight for a district championship. Last year, we lost a tough 2-1 game in the playoffs to a Katy-Taylor team that advanced to the state tournament, so with so many players coming back, I think we have a chance to go a long way again this season.” Editor’s Note: Todd Freed is the Emmy Award-winning co-host and producer of the KUBE SportsZone, which airs Saturday and Sunday at 6 p.m. on Channel 57-KUBE. To submit high school sports news for possible inclusion in SportzBuzz, please email [email protected].

Foundations of a Strong Meditation Practice