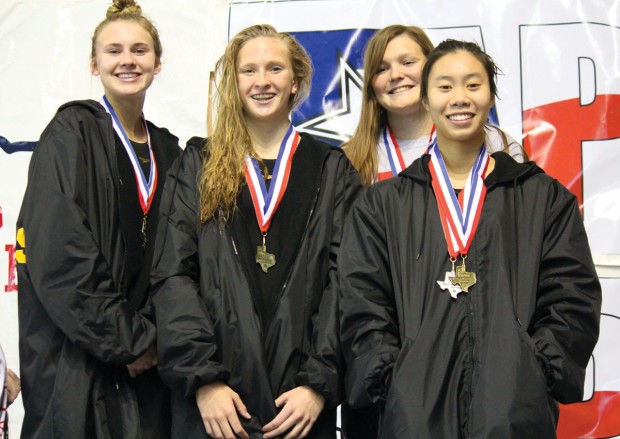 For the 25th time in school history, St. Agnes Academy has won a state championship in swimming and diving. The Tigers put forth a dominant performance to win this year’s TAPPS 5A Division I State Swimming and Diving Championship by a significant 40-point margin.

Highlighting the championship was a state record-breaking swim in the 200-freestyle relay, where Kate Olson, Maggie McGuffee, Anastasia Kontrimas and Angel Hoang teamed up for the gold medal victory. The girls broke the state record previously set in 2009 by the St. Agnes relay team that included Kontrimas’ older sister Kristina as well as Hoang’s older sister Van-Anh. “It’s pretty amazing that two of our girls would play a major part in breaking the state record set by their older sisters,” said Tigers head coach Kaitlin Kelley. In addition, the Tigers medaled in numerous events. Sarah Steffes, Ashley Mercadel and Alex Allen placed among the top three in multiple individual and relay events for the Tigers. “It truly was an entire team effort,” said Kelley. “It also speaks to the depth of our program. The great thing is that we’re also a really young team. We only had three seniors swimming at state, and so we should be pretty strong again next year.” 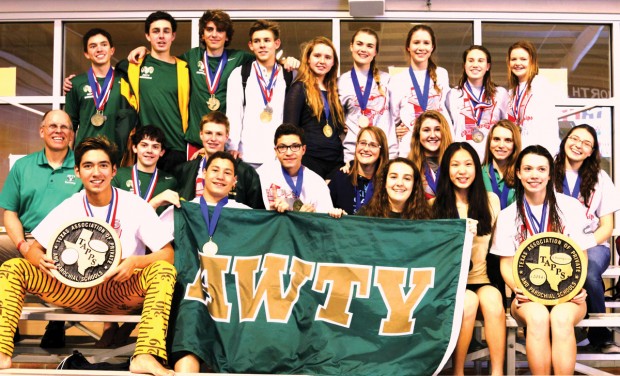 It was a clean sweep for Awty International, with the Rams boys and girls both winning the TAPPS Division II State Swimming and Diving Championship.

In TAPPS Division II, it was a clean sweep for Awty International, with the Rams winning both the girls and boys state swimming and diving championships. “We made school history by winning a girls and boys state championship in the same sport,” said Awty International swim coach Tom Quitzau. “After our teams finished first at regionals two weeks earlier, the kids realized they had a chance to do something truly special at state. It was an honor and thrill to see it happen.”

For the Awty boys, Alexandre Marcos, Sebastian Andrade, Rodolfo Fernandez and Sam Quitzau broke a school record in winning the 200-medley relay, while Tyler Goulding teamed with Fernandez, Quitzou and Marcos in setting a school record in the 200-freestyle relay. Plus, Jason Rehg, Fernandez, Goulding and Andrade brought home the gold medal in the 400-freestyle relay. Goulding had individual second-place finishes in both the 50 and 100 freestyle, and Andrade broke a school record in his second-place finish in the 100 breaststroke. For the Awty girls, it was a spectacular meet for Elizabeth Hirs, who won the 100 freestyle in a school-record time of 55.12 seconds while also breaking a school record in the 50 freestyle. Hirs teamed up with Katie Hillyer, Lauren Ward and Christina Moreno to set school and state records in winning both the 200- and 400-freestyle relays. Moreno was also a second-place finisher in the 500 freestyle, while Ward took second in the 100 butterfly. “Our girls and boys were nearly perfect,” said Quitzau. “They did exactly what there were supposed to at state. Overall, we broke 12 school records and two state records. It was sort of an onslaught by our team.”

In TAPPS Division III, the St. Thomas’ Episcopal girls’ string of four consecutive state championships came to an end at this year’s state swimming and diving meet, but the STE girls still finished a most respectable third in the state. “We only had six girls on this year’s team, so it was a challenge,” said STE head coach Helena Finley. “Still, I was excited for the girls to finish third in the state.”  Amanda Schneider broke a school record in the 100 butterfly, while Kelley McGough, Molly Egan, Becky Hawk and Hannah Hawk also scored valuable points for STE. It was a tremendous meet for the STE boys team, which finished second in the state. The STE boys were especially strong in the relays. Nick Flato, Elijah Berry, Kenta Nebgen and Logan Jones finished second in the 200-freestyle relay in a school-record time, while James Finley and Xavier Marshall teamed with Berry and Jones for second place in the 400-freestyle relay. In addition, Finley, Nebgen, Flato and Joseph Lupski finished in the 200-medley relay. Individually, Finley set a school record with his second-place finish in the 100 breaststroke, while Jones and Nebgen finished third in the 100 and 50 freestyle, respectively.