The gift of girlfriends 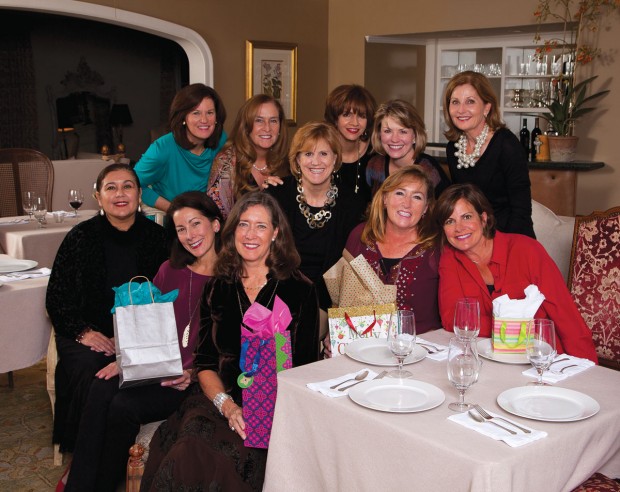 Unexpected sleepovers, cars rolling into a ditch and Dirty Santa presents. That’s what happens when a group of 40 moms in Memorial gets together the Friday night school lets out for the holidays.

They’ve been doing it for nine years. One mom (who asks to remain anonymous) hosts an all-out girls’ bash – limited to mothers at her children’s schools – with dinner and drinks catered and bartended.

“Everyone brings a fun wrapped gift,” the host says. “We have a $50 limit, but that seems to have gone up [judging] by the gifts. Then we all draw numbers. Number one picks a gift, opens it and shows it to everyone. Then number two can either steal that gift or open a new one. Once a gift has been stolen two or three times, it is dead. People get very serious about it.”

The “dirty” gift isn’t what it sounds – it’s just one that the host secretly adds to the mix. “Usually something horrible like a snowglobe or a whisk. But you never know if you got the dirty gift or if someone actually brought it, so folks are too nice to say anything.” At party’s end, the guest who got the dirty gift gets a surprise from the host, “a nice purse or something similar.” Then those who have visited the bartender a few times sleep over, in an attempt to keep everyone safe and keep any cars from rolling into a nearby ditch (it’s happened).

In a tamer tradition in West U, Brenda Willson’s Bunco group gathers every holiday season for Bunco, dinner and a white elephant gift exchange similar to Dirty Santa, minus the crummy gift. “There are usually several coveted gifts,” Brenda says. “When our kids were younger they were decorations they would love, but now, it’s evolved into something like a rosemary tree. We all can’t wait to learn what the prized gift is every year.”

Each January, members are assigned a month to host Bunco and dinner. Whoever gets December hosts the group the second week of the month, “before the craziness starts and everyone’s frantic.”

Brenda’s Bunco group started some 22 years ago with 12 moms of children at Annunciation Orthodox School and West University Elementary. Through the years, friends and neighbors joined, but the count remains 12. “It’s fun having these friendships for all these years, going through pregnancies and babies and now the kids are getting married.”

In Meyerland, Sarah Braham hosts a Hanukkah-Mahjong party for 35 women, where they eat latkes and Hanukkah cookies, then light Hanukkah candles and sing blessings. Sarah invites women from all areas of her life; the common bond is a mahjong passion. They’ll start at 11 a.m. and play until 5 p.m., breaking only for lunch and candle-lighting.

About half of the group is Jewish, so “those who know sing along, and the others are good sports,” Sarah says. “All these women have watched our kids get bar and bat mitzvahed, they’ve gone to our weddings, they share our traditions. This is another way to share tradition. And then we play a whole lot of mahj!”

If these parties sound fun, but the thought of adding one more thing to the holidays is making you fidgety, worry not. There’s another group of Houston women who learned the hard way that three weeks before Christmas is no time to squeeze in one more thing, so they wait until the first Saturday after New Year’s to host their “I was just too busy” holiday party.

Wendy Burgower, a family lawyer and an originator of the party, says, “The fun thing about doing it after New Year’s is that everyone has a good story to share.” Wendy and a group of 15 other women who work in family law eat, drink and exchange white elephant gifts. Then each writes down the name of a charity and drops it in a hat. One charity is randomly chosen, and everyone attending the party writes a check to that charity. “We all recognize that we are blessed and don’t need nice presents,” Wendy says. “The collective is what makes the gift significant. It’s usually a couple thousand dollars.”

Maybe most importantly, Wendy and her friends are passing the tradition down. Several tween and teenaged daughters attend the party now, learning not only about charitable giving, but also about the importance of nurturing – and celebrating with – a great group of girlfriends.

11:00 am to 3:00 pm
Location:
Houston Center for Contemporary Craft