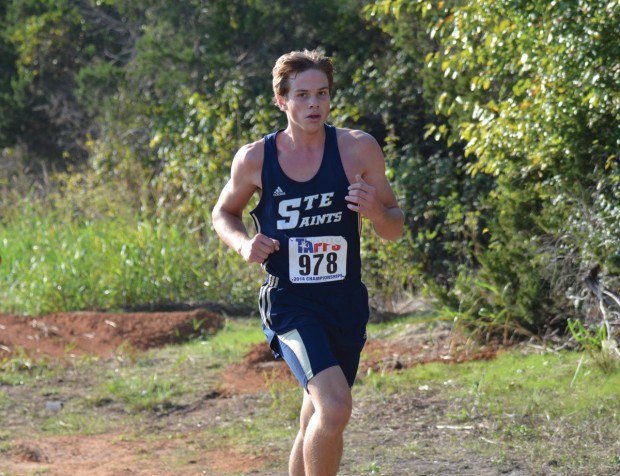 For the fifth time in the last six years, St. Thomas’ Episcopal School is a state champion in cross country.  With four finishers in the top 20, the STE Saints boys team won the TAPPS 3A state title by a 16-point margin over Schertz JP II.

“It was a really special year,” said STE cross country coach Bret Ramsey. “The goal for our guys is to represent themselves, their family and our school in an honorable way. I think all of that shows up in practice and in the meets.”

At the state meet, STE’s top finisher was senior Ben Graves, who came in fifth overall. “Ben has been incredibly consistent all year,” said Ramsey. “He was on the 2011 and 2012 state-championship teams and has been a key part of our program for his high school career.” Just behind Graves, STE junior Adrian Fetterley placed sixth overall at the state meet. “Adrian put it into high gear and ran a great race,” said Ramsey.

Other top finishers for the Saints included senior Matthew Hrncir, who despite taking a fall in the race, finished 12th. In addition, junior Saagar Pateder finished 17th, senior Kyle Lin came in 20th, sophomore Riley Moran was 24th, and fellow sophomore Christopher Han came in 48th. “I’m just really proud of all our guys and especially our two seniors, Ben and Matt. They showed great leadership throughout the season, and it paid off,” said Ramsey. 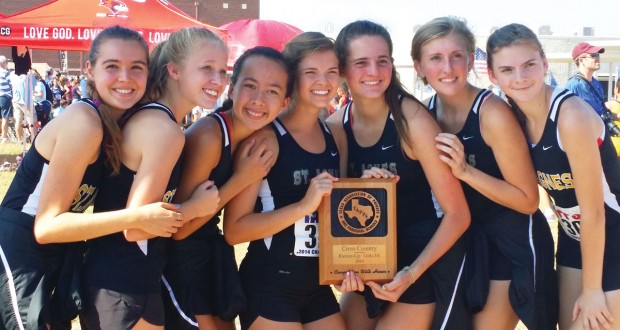 “Our girls trained really hard all summer and even went to a running camp in Colorado, so all that hard work paid off,” said Tigers head coach Kristi Robbins. “We don’t have one exceptionally fast runner, just a great group of runners who run as a pack. They stick together and do really well. One of the great things about the state meet was that we edged out Dallas Ursuline for second place, and they were the defending state champion.”

The second-place finish also speaks to the growth of the cross-country program since Robbins took over at St. Agnes. “When I arrived here from Cinco Ranch High School there were only 15 girls running cross country. We’re now up to over 80 girls in the cross-country program, which amounts to about 10 percent of the student body. Plus, we’re a pretty young group, so the future looks pretty bright.” 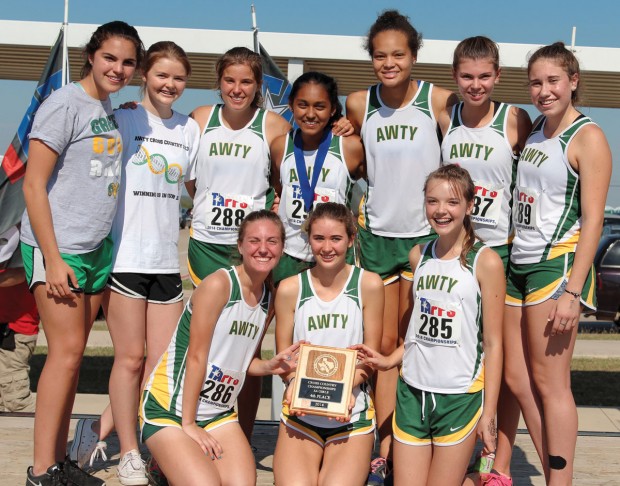 Finishing two spots behind St. Agnes in fourth place overall at the same TAPPS 5A state meet was Awty International, which won the state championship in TAPPS 4A last year. “Our girls overcame a lot of adversity to do as well as they did,” said Awty cross country coach Robert Sload. “We lost one of our top five runners, Sydney Arceneaux, to a stress fracture early on. Plus, two of our other top runners, Amelia Ward and Anaelle Lahitte-Crohare, were slowed by injuries this season.”

The Rams were led at the state meet by Nikita Prasad, who finished ninth overall. “Nikita ran a really solid race,” said Sload. “She’s been all-state every year she’s run cross country and is being recruited by a number of schools. She’ll certainly run in college.” Other top runners at state for Awty were Amanda Gerlach, Margot Hemminga, Christina Moreno and Ashling Devins.

Meanwhile, led by the individual ninth-place finish of Thor Crux, Awty boys finished third at the TAPPS 5A state meet. Aaron Hurd was 12th overall, followed by Ben Matthews, Dylan Thissen, Nicolas Motta, Jason Rehg and Martin Motta. “Thor was tremendous,” said Sload. “He’ll run in college next year at Texas A&M Corpus Christi. For us to move up in classification from 4A to 5A and finish third in the state was quite an accomplishment by our entire team. They really came through.”

In next month’s column, we’ll have a report on the powerhouse cross-country teams from Stratford High School. As of press deadline, the Stratford boys were looking to defending their UIL 5A state championship while the Stratford girls also had earned a berth to state.