From our student correspondents 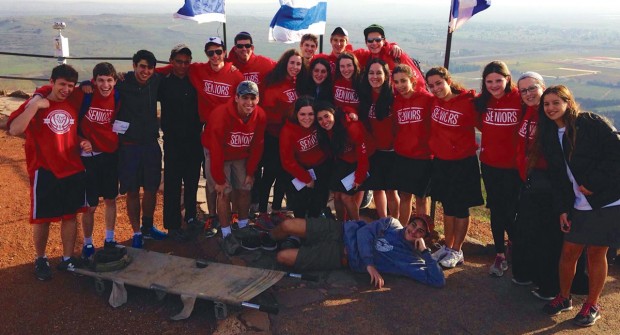 Since this summer, I have been privileged to work with nearly 50 students from 21 high schools as part of our online School Buzz blog. These students balance tough academic workloads with extracurricular activities, in addition to turning in regular blog posts. They’ve produced compelling writing and photography, interviewed peers, teachers and administrators, and reported back on what’s happening from their perspectives. I couldn’t be prouder. Below, I’ve selected one excerpt that moved me and one that made me laugh. For more posts, see School Buzz.

Lilly Gelman wrote a personal account of her experience on the Robert M. Beren Academy two-week trip to Israel. She wrote:

“[The trip was] full of amazing sights, fascinating museums, spiritual Sabbaths, and memories to last a lifetime. But there was one lesson we learned that made the trip unforgettable.

Two terrorists entered a synagogue in a town in western Jerusalem and slaughtered five innocent Israelis while gravely injuring many others. The terrorists planned their attack so that it would take place during the morning services, when the synagogue would be packed with people.

Later that afternoon, in an area south of Jerusalem, hundreds of high school students made a human chain and sang to show their unity and support for the families affected. The following morning, at the same synagogue in which the attack took place, over 2,000 people showed up for services. These people were not going to stop living their lives and were not going to stop fighting for their country.

The events of that day shook me. I called my mother, crying, telling her I wanted to come home. This is how she responded. ‘Look around. Have the cars stopped driving, the people stopped walking, or the buses stopped operating? No. Because if every time Israel was attacked the country came to a standstill, there would be no Israel. If you run away, the terrorists have won. By staying, you are doing your part in showing your unity and support for Israel. So go, enjoy the rest of your trip. Do not live in fear.’

This struck me as profound advice that can be applied to any person in any country. Every country has had its share of terror, and without the unity that followed, those countries would not have pulled through. Think of 9/11, and the Boston Marathon bombing. In dire times such as those many people fear that there is nothing they can do to help. That is false. By not running away, not living in fear, and showing unity, we are fighting back, and we will pull through.”

Seokhyun Baek of The High School for the Performing and Visual Arts wrote about a trip to the Texas Book Festival. He wrote:

“The Creative Writing department at HSPVA took a field trip to Austin, where they attended the 18th annual Texas Book Festival to bond with each other, take a (very temporary) reprieve from school, and get inspired by the 250-plus authors who attended. However, the trip wasn’t all about the festival. The department stopped by McKinney Falls State Park, along with the Museum of the Weird, to further enhance comprehension of nature, people and literature.

At HSPVA, it’s rather fair to say we’re not the most athletic group (other than the Dance Department), and when the teachers surprised us with a one-mile hike, more than half the department turned white as a sheet. Keep in mind this is the school that forces an online PE class upon its students (excluding the Dance Department), and simply going up a flight of stairs is justification to take a breather. Luckily, the department managed to avoid the hike by enjoying the waterhole and the environment instead.

The next location was the Museum of the Weird, and for the sake of conserving the reader’s stomach, I will only mention that the department watched a sideshow, causing several to bail out of the room, complaining of symptoms that can typically found in a ‘side effects may include…’ section of a drug commercial.

With our energy spent, we went to a food-truck park. And with that, everyone headed for the hotel and collapsed into their beds.”

Editor’s note: School Buzz is written by students. Editorial content does not necessarily express the opinions of the publisher or editor.