I credit my old neighbor Marnie Greenwood with some of my sweetest early-mom memories. Every year, when the babies on the street were little and we were looking for ways to entertain them (and ourselves), she would throw a children’s Valentine’s Day party. She and her children Griffin and Remi (now teenagers) would host the babies on the block and some 15 or 20 other moms and babies for a late-afternoon pink- and red-themed party that took the place of dinners out and babysitters.

“Most of my friends had little kids, and we were kind of going away from the traditional married couple’s Valentine’s night,” Marnie says. “No one wanted to get a sitter and do the set dinner, but we still wanted to have fun.”

Marnie’s parties promised cookies to decorate, construction-paper valentines for the bigger kids to make and – at top billing – a train that carted children endlessly around the block. “Oh my gosh, it was a zoo,” Marnie says. “Everyone has Christmas or birthday parties, but this was just for fun.”

Courtney Brynes says her oldest daughter Caroline, now 8, is the reason she started hosting big Valentine’s bashes. “My idea was to have a big playdate,” Courtney says. “My parents have a big backyard, so I wanted to do a party where I could invite all of my friends and their children, instead of having to limit it like a birthday party.”

The “playdate” turned into an annual event bringing some 80 kids and parents together for a “free-for-all,” as Courtney remembers. There were bounce houses, tables set with make-your-own Valentines and cookies to decorate – “we’d pick up sugar cookies from Rice Epicurean and set them out with sprinkles and icing” – and candy bags to fill. “This was right when candy buffets were a big thing, and I’d set out apothecary glasses filled with red and white candies,” Courtney says.

Courtney didn’t forget the grownups. “My mom made a cheese torte with raspberry preserves on top in a heart-shaped pan,” she says. (See recipe below.) “We’d have crudité and fruit and artichoke dip and Paulie’s heart-shaped cookies. One year when it was freezing outside we had hot apple cider in Valentine cups.”

Courtney stopped hosting the Valentine’s parties about three years ago. “We’d invite as many people as we knew. Then they all started having two and three kids, and it got too big.

“Everyone loved the free-for-all,” she says. “The boys could run, and the girls could do artsy stuff. And I loved that my daughter looked so forward to it and that other people would ask me every year when it was going to be. You don’t do it to have people say, ‘Oh I love it,’ but it’s nice when people enjoy it.”

Shanna Schanen’s Valentine’s tea parties were far from free-for-alls. She and her daughter Skylar would host the parties for little girls in Skylar’s elementary school classes. Invitations were printed – Shanna remembers they were something pretty from Bering’s with ribbons and teacups. “We would set long tables with Pottery Barn Valentine plates and tulips, and it would be set up for tea,” Shanna says. Plates would be filled with tea sandwiches and Paulie’s heart-shaped sugar cookies, and they’d serve tea from Valentine-themed teapots. Then a princess would appear to paint faces.

“The girls would get all dressed up in pretty dresses and then jump on the trampoline and play on the swings,” Shanna says.

Skylar is now 14, rendering Valentine’s tea parties out of the question, but she has fond memories of the parties, specifically of “the food and laughing with my friends,” she says. As does Shanna: “I think it helped bond their little friendships. They giggled and enjoyed all the excitement and it was fun to watch.” 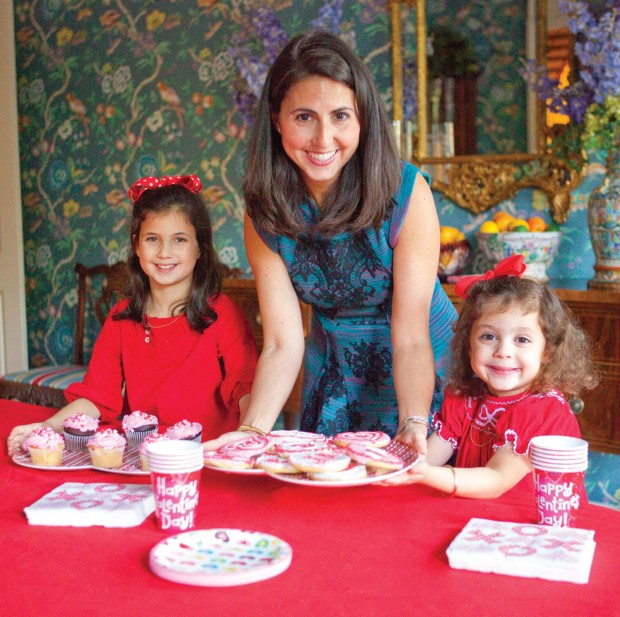 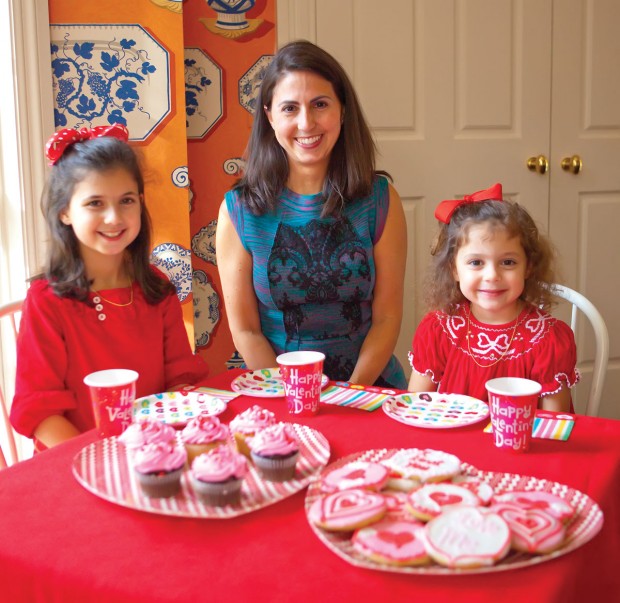 Courtney Brynes and her daughters Caroline, 8, and Emerson, 4. (Photo: stpimages.com)