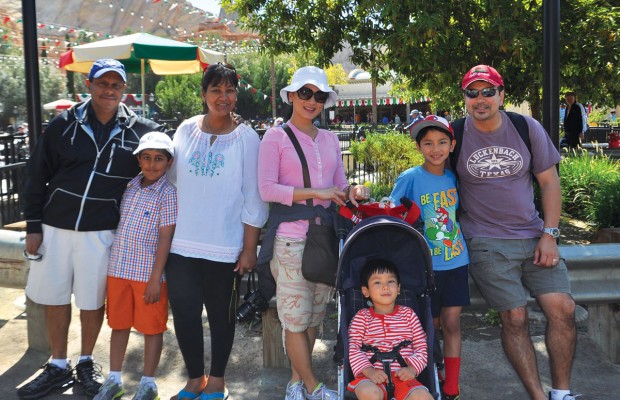 Sharon and Mark Chetty have been traveling with their son Rushil for nearly a decade, since he was just 3 months old. Mark travels frequently in his work as an IT professional, and his family often comes along. So Rushil likes traveling, and he’s accustomed to the rigors of the road. There was always something missing, though.

“Being an only child, he gets really lonely,” Sharon said. “Mom and Dad get really boring after a while.”

So they decided to invite the Puigs, with their two boys, on a Spring Break adventure last year. Between the activities they’d planned and a California earthquake thrown in for good measure, Spring Break 2014 was definitely not boring.

Spring Break can be an ideal time to join with another family on a group vacation. Several Buzz-area families had a chance recently to explore the pros and cons of teaming up with travel buddies – more fun for kids as well as parents, while still creating space for family time. Key to a good group travel experience, all agreed, is making sure your family is compatible with that of your proposed travel partners.

The Chettys had met the Puigs through Little League, when Rushil was in the first grade.

“We found that we were on the same level with the way we bring up our kids,” says Sharon, “and we got to be really good friends.”

The Chettys had a Hilton timeshare in San Diego with space for the three of them and the Puigs – Jorge and Esther and their two boys, Nicholas, 9, and Lucas, 4. They knew they’d be good travel companions, after all the time they’d spent together on shorter outings around Houston.

“What I enjoy about this family, is I call them up at 9 and say let’s go somewhere, and they’ll say sure,” Sharon said. “I’m not particular about bedtime for the children and neither are they, so if we’re going out we can go to midnight. So that was a huge deciding factor to go with them, was that they are easy-going with regard to the kids.”

So they booked the trip together, and to make things more interesting, they added a bit of Hollywood stargazing to the itinerary. The Chettys arrived first at the Hilton right across from Universal Studios.

“We saw Charlize Theron getting into her car in the driveway – and then we saw Jack Nicholson in his yard, cleaning his pool,” she enthused. “I said, ‘No it can’t be’ – but I suppose stars’ pools need to be cleaned sometimes, too.”

That night the Puigs joined them – just in time to share the unsettling experience of a magnitude 4.4 earthquake the following morning. “It was extremely scary,” Sharon recalled. “We were on the 24th floor – thankfully it was nothing severe.”

After the earthquake, the excitement was more pedestrian; the families rented a minivan so they could travel together, and the kids played games in the car. They stayed in La Jolla, with a spectacular beach and seawall, where the kids had a great time playing with the seals. They went to Legoland and Disney’s California Adventure theme park.

In San Diego, they took a boat cruise on Tuna Harbor and toured the Midway Museum, a World War II aircraft carrier-turned-war museum, stopping to marvel at the 25-foot-tall “Unconditional Surrender,” a statue based on a famous photograph of a sailor just home from the war, seizing an unknown woman in a passionate kiss.

They also had a memorable taste of the Chettys’ homeland at a South African restaurant called Cape Town Pub. The boys were delighted with a regional favorite called bunny chow, which consisted of a loaf of bread with the insides pulled out and filled with curry. 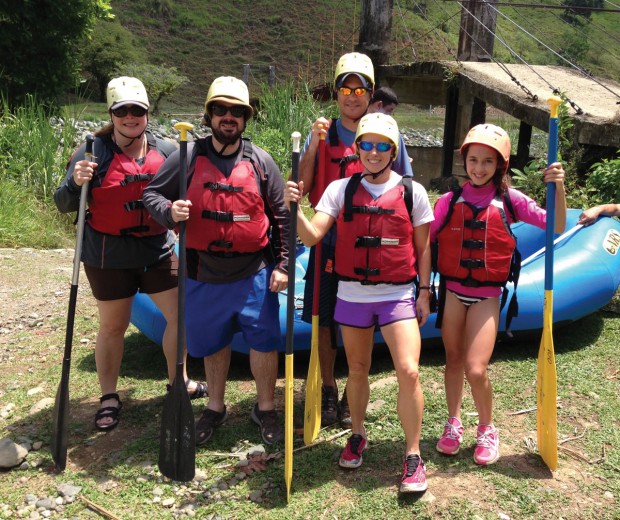 For the Mattas and the Nassers, the whole of their two families ended up being more than the sum of its parts, as the old equation goes. Kids were able to go off and do kid things while moms went running or relaxed around the pool and dads went dune-buggy riding, taking elder daughter Julia along for some special father-daughter time.

“I think it’s more fun; it makes it more interesting, especially with people that you have things in common with,” said Gisselle Matta. Gisselle and her husband Eduardo have teamed up for several trips with Dean and Alana Kennedy Nasser, whom they know from their work in the medical field. Elena Matta, 7, is good friends with Alexis Nasser, who is also 7, and big sister Julia Nasser, 14, gets along with everybody.

It all began during Spring Break 2013, when the Nassers were going to Costa Rica and invited the Mattas along.

“Basically we tagged along and had a great time in Costa Rica. The following year we took a trip to Cabo San Lucas,” Gisselle said. That time, a couple more friends joined them – Claudia Rivera, from Houston, and Dr. Chrystal Louis, who now lives in Boston. “We’d traveled together before, so we already knew likes and dislikes.”

In Costa Rica, first they went to the Arenal Volcano area for a few days, staying at the Lost Iguana Resort, hanging out in the jungle, soaring through the cloud-forest canopy on a zip-line tour, bathing in the volcano-heated waters of Tabacón Hot Springs. Then they took a bus trip to the coast, where they stayed at the Hotel Parador near Manuel Antonio National Park.

In Cabo San Lucas, they rented a house with a pool, and hanging out was more of a priority than going out and keeping a busy schedule. They still managed to go fishing, go dune buggy riding, and enjoy the beach and wave runners. Having the house opened a lot of possibilities; there was plenty of space to have quiet time or a nap, or get together and play games – of which there were many. This group is looking forward to their next Spring Break adventure in 2015 in a Western Caribbean cruise.

“We’ve done family travel with other groups before,” said Gisselle. “When we’re traveling alone we fill the agenda with everything we can see – but part of the reason we wanted to do this trip was to have time to go have fun but also time to sit in a chair and do nothing.”

Last year Jessy and Shea Morgenroth joined in a rather more intense group Spring Break getaway – a ski trip at Beaver Creek Resort in Colorado with their college friends from Texas A&M. Three families teamed up for a total of six adults and seven kids, ranging in age from 3 to 12.

The Morgenroths’ two girls, Quinn and Reese, were 6 and 3 at the time. They’ve been getting together regularly with these friends, over the years, and they’ve become almost like family. So they thought they were ready for a group ski trip, but this time they almost bit off more than they could chew.

The logistics were “mass chaos,” said Jessy. They narrowly escaped being snowed out on their way to the resort; there were ski classes and snowboarding classes at all different times and different levels, all of which different kids needed to be driven to. Little Reese got the flu; Jessy broke her wrist; and three of the kids got upset when one of them had a runaway skiing incident during ski class.

The first few days were the hardest – especially for the Morgenroths, whose children were the youngest. On the first day, “the little tiny ones liked the skiing, but the other ones were just crying at the bottom of the bunny slope – they were beet red, all upset,” Jessy recalls.

The learning curve was steep. Halfway into the trip they decided to hire a teacher for private lessons. Things went more smoothly after that.

By Day 3, 6-year-old Quinn finally learned how to stop. “She really took to it and was having a blast, flying off places. But my 3 year old was tired of it – she was saying, ‘I want my Mommy, I want my Daddy, I want to play in the hot tub.’”

It wasn’t until the trip was nearly over that Jessy discovered there was a daycare service.

The last day was when she caught an angle on an icy slope and broke her wrist – although the first-aid crew assured her she was fine because she could move it, and it wasn’t until she got home and went to the doctor that she learned it was broken.

“All in all, we had a blast,” Jessy says. Although she’s glad the little girls learned to ski at a young age, if she’d had it to do over again, maybe she’d have waited until they were a little older.

She’s pretty sure that the Texas A&M trio will try another ski trip at some point. Their next trip will probably be someplace warm – they’re currently considering a beach trip. But this year for Spring Break, they’re taking a break from each other, going their separate ways – and little Reese is going to be mutton bustin’ in the Houston Livestock Show and Rodeo, so the Morgenroths are going to enjoy a nice, quiet Spring Break at home.