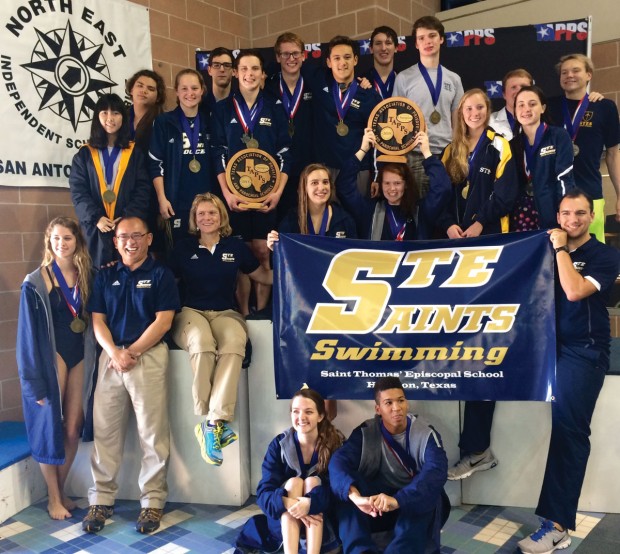 It was a clean sweep for the St. Thomas’ Episcopal Saints at the TAPPS Division III state swim meet, where the STE boys and girls swim teams both captured state championships.

It was a clean sweep for St. Thomas’ Episcopal at the TAPPS Division III state swim meet, with both the boys and girls capturing state championships.

“In my 40 years as either a competitive swimmer or coach at any level, including international events, this is the most excited I’ve been over a victory,” said STE head swim coach Helena Finley.

The STE boys kicked off the state meet with a critical victory in the 200-yard medley relay, with the foursome of Logan Jones, James Finley, Nick Flato and Kenta Negben teaming up for the victory. “If you looked at the seeding times, we were projected to lose by a second. But the boys swam a spectacular race, beating their seeding time by four seconds, which is pretty amazing,” said Finley.

In the 200-freestyle relay, James Finley, Flato, Nebgen and Elijah Berry captured bronze, while the foursome of Flato, Berry, Jones and Joseph Lupski won silver in the four-by-100 freestyle relay. In addition, Finley finished third in the 100 breaststroke.

Meanwhile, led by a pair of bronze-medal finishes in the 50- and 100-yard freestyle by freshman Olivia Lane, the STE girls edged out The Woodlands Christian Academy for the girls state championship.

STE was especially strong in the relays, where the STE foursome of Molly Egan, Hannah Hawk, Amanda Schneider and Zoe Carlson-Stadler captured silver in the 200-medley relay. STE sealed the state title with its second-place finish in the final race of the meet. Kelley McGough, Carlson-Stadler, Hawk and Lane teamed up to win the silver in that event. “The girls needed a fourth-place finish in that final race to win state, and they really came through under pressure,” said Finley. 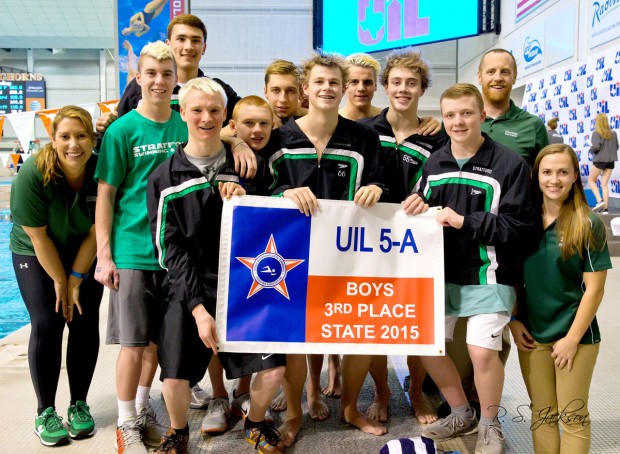 In the TAPPS Division I girls state swim meet, St. Agnes Academy finished second in the state, coming up just short in its bid for a 26th state swim championship for the school. “I think overall we did really well,” said St. Agnes swim coach Kaitlin Kelley. “We broke some school records and even a state record, and considering the youth of our team, the girls did a great job.”

With her school-record, second-place finish in the 50-yard freestyle and a bronze medal in the 100 freestyle, McGuffee ended up winning four medals at the state meet. Kontrimas broke a school record with her third-place finish in the 200 individual medley, while Mercadel won a bronze in the 500 freestyle. The Tigers also received valuable points from freshman Bridie Hibbler, with her strong performance in the 100 breaststroke.

At the UIL Class 5A state swimming and diving championships, it was a great meet for Stratford High School, with the Stratford girls finishing second in the state and the Spartans boys taking third overall. “I’m really proud of our whole team effort,” said Spartans head coach Mike Hoskovec. 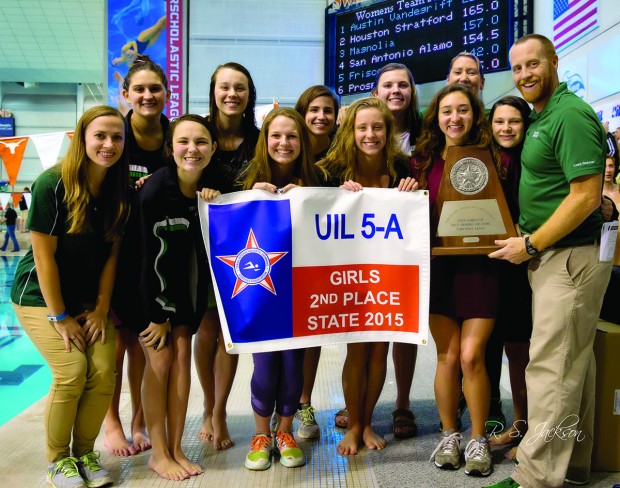 It was a fantastic performance for the Stratford Spartans, who finished second overall at the UIL Class 5A girls state swimming and diving meet.

For the girls, Stratford diver Phoebe Lamay, who will compete next year at Cal-Berkley, won gold in the 1-meter dive, with teammate Jordan Ransom finishing sixth in that same event. Stratford won a silver medal in the 200-medley relay, with Maddie Robinson, Brittany Baerg, Courtney Jackson and Erin Avary finishing second in that event. In addition, Avary made the finals in the 50 freestyle.

That same foursome also finished first in the 400-freestyle relay, while Bobo broke a school record in his second-place finish in the 50-yard freestyle. Airola won a bronze in the same race. “It’s just a group of guys that love to race,” said Hoskovec. “When they lights are on, they’re at their best.”