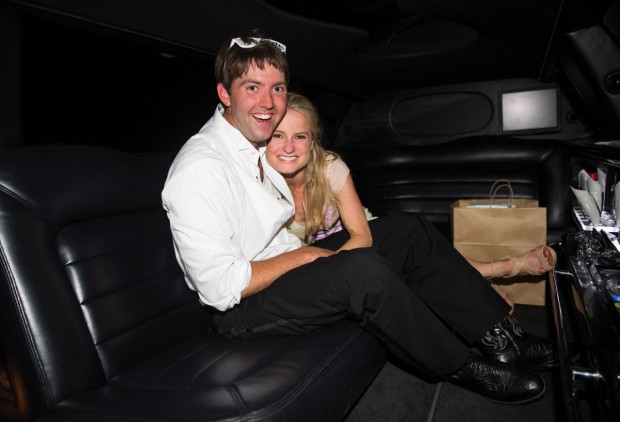 Charles and Leslie Simmons were whisked away in a limousine from their three-day wedding at Barton Creek Resort to their mini-moon at Lake Austin Spa. (Photo: Chris Bailey Photography)

Maybe it’s taken all you’ve got to just tie the knot, and Bora Bora or even the Riviera Maya are a little out of reach. Maybe it’s just the timing that’s off; you’d rather plan your escape to the tropics when it’s cold and gray at home, or when it fits in a little better with other life events. Whatever the reason, many couples are opting to delay their honeymoon. But as three Buzz couples learned, that doesn’t mean you have to jump right back into business as usual.

Enter the mini-moon: a quick escape a little closer to home.

For Leslie Carrigan Simmons and Charles Simmons, it was clear from the outset that they wouldn’t be able to do the Bora Bora honeymoon they had planned right away; Charles was finishing his first year of his MBA with an internship and couldn’t go too far until that was finished. Instead, they stayed closer to home and put their energies into an all-out kind of wedding: a full Memorial Day weekend at Barton Creek Resort and Spa. They began with a big welcome party on Friday night and held a golf tournament for the guests on Saturday, followed by a rehearsal dinner. They culminated the gathering on Sunday with a picture-perfect wedding and a party that lasted until 1 a.m. – after which a limousine whisked them off to a getaway at Lake Austin Spa Resort.

In retrospect, they say, it was the best thing they could have done. “We were there Friday night, Saturday night, Sunday night, visiting with over 600 guests and eating too much and drinking too much and hardly sleeping at all, and the last thing we wanted to do was get on a plane at 5:30 a.m. and travel 12 hours to wherever,” said Charles.

There would be time enough for that 12-hour trans-Pacific flight later. For now, they slept in as long as they wanted to, ordered room service and just relaxed.

“It ended up raining the whole first day, which we really loved,” said Leslie, who works in interior design. There was no temptation to go out and do anything other than just relax and enjoy the views of Lake Austin from their lakefront suite.

“The first whole day we sat in big comfy robes on our beautiful porch looking at the water,” Leslie recalls. “We ordered all three meals from room service and just literally sat on the balcony with a glass of wine and watched the storm.”

After 24 hours of doing nothing at all, they took advantage of the spa, getting three different types of couples massages and then a good workout in a spinning class. Finally the skies cleared up long enough to enjoy the lake, so they got a pair of kayaks and kayaked down Lake Austin. The resort is tucked away on a peaceful side of the lake, giving it a private feel, Leslie said.

The delayed honeymoon was Charles’ idea.

“I never dreamed of not going on my honeymoon right after my wedding – but the way we did it was perfect. I wouldn’t change anything,” Leslie said. The mini-retreat gave them a chance to reflect on the whirlwind they had just passed through and look ahead to what would come next.

Three months after the actual wedding, the Bora Bora retreat was like a dream: over-the-water bungalows, a romantic sunset cruise, a surprise encounter with Jennifer Aniston. There was time to think about what they wanted and plan it out, and even after the 12-hour flight, there was energy to do it all: snorkeling in the coral reef right outside their door, paddle-boarding, parasailing, swimming, jet-skiing, taking an ATV to the top of the mountain to gaze out at the infinite variation in shades of blue that surrounded them.

“If we’d gone right after the wedding we’d have been completely exhausted and wouldn’t have enjoyed it as much,” said Charles. “The way we did it, we were well rested and really looking forward to it. We had full energy and were able to do everything we wanted.” 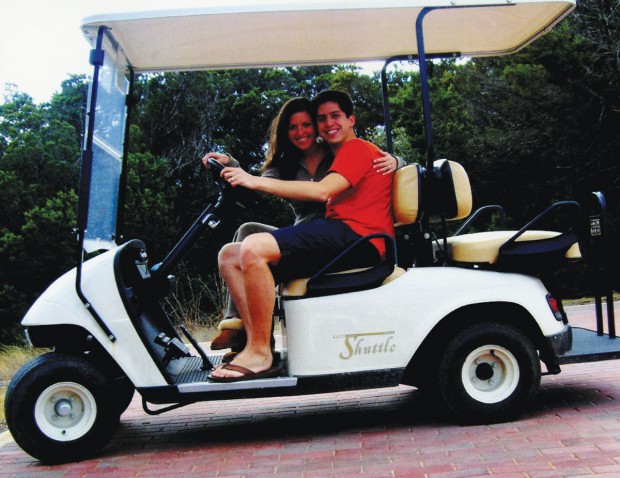 Debbie and Arturo Karakowsky escaped to La Cantera Hill Country Resort for their mini-moon, where a golf cart was essentially their car for three days.

Like the Simmons, the Karakowskys weren’t ready for a big honeymoon after their January 2008 wedding, but for different reasons. Debbie and Arturo met as counselors at a summer camp when they were just 18, and their story went like a lot of summer romances. The two became fast friends and a few years later began dating; a year later, they were engaged, and started dreaming of the big traditional wedding. But there was a twist. Arturo was a Mexican citizen, and Debbie was a law student in Austin. They immediately began the drawn-out and costly visa process that would allow Arturo to live and work in the U.S.

“It was a really crazy time for us, “ recalls Debbie, now an attorney with the litigation boutique Yetter Coleman LLP.  “We were only 23, I was in the middle of law school exams, Arturo was finishing school and getting his professional licenses, we were both entrenched in our job searches, trying to plan a large wedding, living in different countries, and then on top of all of that, we were trying to navigate the immigration process.”

But the challenges just made them stronger.  Arturo’s visa process proceeded on time, and the two made it to the chuppah as scheduled, in January – but Arturo couldn’t leave the country until March, when his visa would be finalized, so the tropical beach would have to wait.

“Instead of a big trip to an exotic country, we needed to stay local so we figured we might as well take it easy and stay in Texas,” Arturo said.

So the couple chose a quick, uncomplicated getaway before plunging back into the thick of things. After the wedding they headed west on I-10 to La Cantera Hill Country Resort, just outside of San Antonio.

“It was actually exactly what we needed – relaxation, recovering from the wedding, down time, reading, enjoying each other,” said Arturo.

It was off-season, and they had the place virtually to themselves. It couldn’t have been more peaceful.

“We had a beautiful casita, and there was nobody else in the village – it was silent. We literally slept for three days,” said Debbie. “A lot of people jump on a plane after their wedding and fly to Bora Bora; I woke up the day after my wedding and literally didn’t have a voice. I couldn’t imagine grabbing a big suitcase and flying 20 hours to a faraway destination.”

Arturo enjoyed the short breather for other reasons, too; he was in the middle of getting the licenses he needed for his work as a financial advisor. “It was intense – if you fail, you lose your job,” he said. “So Friday of the week before, I drove to Austin to get married; then Monday morning we headed to La Cantera for two nights. I was in the middle of my training – so the final morning of our mini-moon, I put on my suit and headed back to work.”

Come Spring Break, both of them would have a little more time to jet off to an all-inclusive resort on Saint Lucia, but despite the glistening sands and placid Caribbean waters, their Hill Country retreat still stands out as one of their best memories.

But nobody beats Kristina and Neville Ramroop for close-to-home convenience for their post-wedding retreat. They knew they’d be headed to Neville’s homeland of Trinidad for their big wedding with the family and a real tropical honeymoon a few months later. Their Houston wedding was in March on a yacht in Kemah, where they were married by the captain and danced the night away with an on-board DJ. Several family members had flown in from Trinidad, so they enjoyed each other’s company until Monday, when the Trinidad Ramroops boarded a plane and the Houston Ramroops took a week off and spent it relaxing and playing like kids in a mini-moon staycation.

“It was just me and him and spending time with each other,” said Kristina. “I wouldn’t trade it for the world – you sleep late and wake up in your own bed, and you could do anything or nothing if you wanted to.”

Some nights they went out for late-night movies and dinner at the Alamo Drafthouse Cinema; other nights they played Top Golf until they closed the place down.

On Friday night they treated themselves to the romance package at The Houstonian, with champagne, strawberries and breakfast in bed. They swam in the heated pools, enjoying the forest-like ambience. “You’re in the middle of the city and don’t even know it –you’re surrounded by the trees and completely secluded,” said Kristina. “You wouldn’t know you’re a block and a half from the freeway. It’s like an escape within an escape.”

The best part of their staycation-mini moon, Kristina said, was the sense of freedom. “What I liked about was that we planned it as we went. With Top Golf, it was like an hour before: ‘Let’s go play golf.’  With The Houstonian, it was the night before. You don’t have to have something planned every day,” said Kristina. “I had enough stress trying to put a wedding together. This was exactly what we needed.”