Where Houston went to help 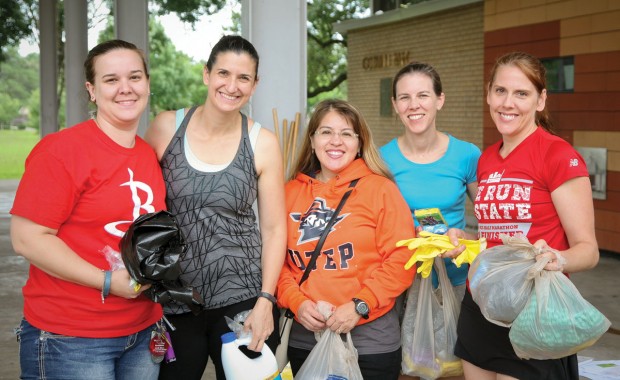 Jessica Littlejohn-Knox, Amanda Sorena, Michelle LaBombera, Christi Megow and Bonnie Bibeau (from left) were part of a group that gathered at Godwin Park after the flood to collect donations and help flood victims. The event was one of many organized on Facebook groups. (Photo: lawellphoto.com)

Meyerland resident Michele Poche woke up early on Tuesday morning, May 26, to the sound of water in her room. Her house was flooding.

She jumped out of bed, ran outside, pounded on doors and moved flooding neighbors to a house on the block that was more elevated. “I was a paramedic for 18 years,” Michele said, “so rescue is part of me.”

Later, she realized the severity of the destruction to her home and belongings. She didn’t have flood insurance and couldn’t afford to take much time off to plan the next steps for her house and children.

When Michele’s long-time friend Dana Karni, an attorney, heard, she went to social media for help. First, she posted in a Facebook group called Houston Flood 2015 Resource/Support Group, which had been created Tuesday morning by her high-school friend, Tandy Camberg Harris. Dana also posted about Michele’s situation in another Facebook group called Moms & Ladies of Southwest Houston (at the time, its name was Moms & Ladies of Westbury, Meyerland, Bellaire, West U, and Rice Village), in addition to her own Facebook page.

Right away, neighbors – most strangers to Dana and Michele – responded. They cleaned and packed her house, brought meals and gave her a new mattress, sofa, coffee table, refrigerator, bedding, towels and even a laptop.

“It was overwhelming,” said Dana. “This would not have come together so quickly if not for social media.”

Michele’s story was common in the days following the record-breaking flood that caused destruction and at least 22 deaths across Texas. In Houston, eight people died, and at least 4,000 homes and businesses were damaged or destroyed.

Ibby Bibby (actually Elizabeth Bandercan, but she’s known by her nickname) said all night long during the storm, people were posting on the “Moms and Ladies” Facebook group about how bad the rain was and reporting that their streets were flooding. When she woke at dawn and turned on the news, she took action.

“I realized that we had to go from reporting what was wrong to being the ‘boots on the ground,’” she said. She had lived in New Orleans during Hurricane Ike and remembered her feelings of panic. So instead of letting those emotions wash over her, she posted this in the “Moms and Ladies” Facebook group: “Ladies, it’s time to rally the troops!”

Ibby, who will teach English as a Second Language at Bellaire High School starting this fall, said the act of typing out those words calmed her down. She instructed others to post HELP if they could be a helper and NEED if they needed something. When she looked back 10 minutes later, there were already 36 responses. Other take-charge women started to chime in with what they could do or provide: food, furniture, clothes.

Before this, the group had served as a place for neighbors to network and provide recommendations such as the best repair shops or restaurants.

“I’m blown away at the depth of the women in my group,” said Ibby. “My husband teases me about all of the recommendations on things, but when it came down to it, these women proved what it means to be in a community.”

Amanda Sorena, a Meyerland resident, said she thought Ibby’s post to get people moving immediately was “brilliant” and met with a “tremendous response that I don’t think anyone could’ve predicted.”

“The people who were okay had the manpower and willingness to help other people,” she said. It started small, but before long, crews of people were showing up. Eventually, volunteer-run “command centers” were created at Westbury United Methodist Church, the Jewish Community Center and other sites. Andria Ward organized the delivery of many hundreds of meals donated by volunteers and businesses, including Snap Kitchen. 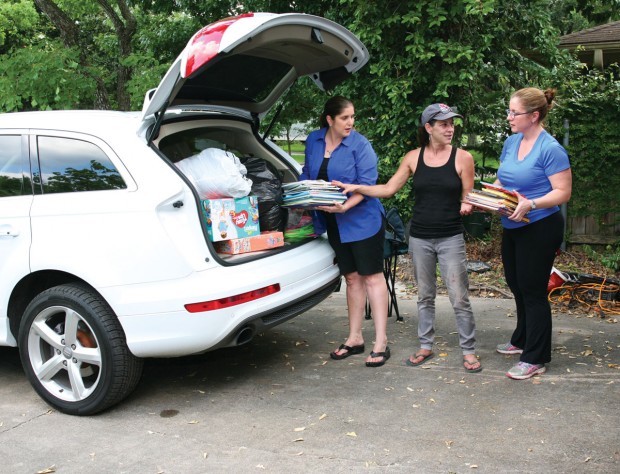 In neighborhoods, Good Samaritans – both in groups and individually – were seen going door to door giving away Chick fil A meals, peanut-butter sandwiches, water, trash bags and boxes. Others walked up to strangers who didn’t have help and started dragging trash to the curb. Some volunteers called in professional help when they realized they were in over their heads, such as when a senior-citizen couple refused to leave their wet and mildewed home. In Bellaire, an army of 30-40 students, parents and friends descended on a Carnegie Vanguard High School teacher’s home to rip out wet carpets and sheetrock after they learned on Facebook that her home had flooded.

Meanwhile, Facebook members continued to share needs and opportunities, such as when businesses stepped up, among them Gallery Furniture, which offered to replace flood victims’ mattresses, and Lowe’s, which gave away buckets filled with free cleaning supplies in its parking lot.

“I kept joking that if you want something done, give it to a busy mom,” said Amanda, whose 5 year old and twin 2 year olds sometimes went with her to help hand out water and food.

Lauri Rosen Sack, who has 16-year-old and 21-year-old sons, used to live on South Braeswood. Several months before the flood, she sold her house and moved a little further north. Their old house flooded.

Lauri, who used to own a children’s bookstore in Meyerland and started hearing about former customers who had lost everything, was invited by Tandy to become an additional administrator on Tandy’s flood-resource Facebook group. Soon, her garage became a makeshift donation center. She drove around town to drop off books, clothing and furniture. She also did others’ laundry.

“If it weren’t for social media,” said Lauri, “none of this would be possible.”

She said everyone used their strengths. Steve Hammerman, a physician, picked up and dropped off furniture and supplies in his truck. All she had to do was text him an address, and he’d take care of it – after completing his surgeries for the day. She also counted on Meyerland resident Ira Rozen and Matthew Bryan, owner of Gruene River Transport, for pickups and dropoffs.

“It’s the power of the people,” Lauri said. “I think everyone’s looking back, thinking it could’ve very easily been me.”

Bellaire resident Tandy Camberg Harris can relate. On Tuesday morning, her street flooded, but not her house. When she saw her friends post on Facebook about how they had four to five feet of water in their homes with photos of how everything was destroyed – including wedding albums – she said she was heartbroken.

Tandy started to think about what was going to be helpful long-term. She remembered what she had learned when she worked as an educational director at Houston Methodist Cancer Center. A renowned psychologist had said, in a presentation, that empathy from others is just as important as medication.

So that morning, she created the Houston Flood 2015 Resource/Support Group on Facebook, and she shared it with her friends and her community groups. She envisioned a safe space for people affected by the flood to not only share resources but provide empathy, too.

It started with 40 friends but quickly grew to over 3,000 members, constantly posting offers to help and reports of people who needed help.

There are many stories of those who received help through these community Facebook groups, even those who are not active on social media. One woman gave birth on Monday, the day of the storm, and ultimately lost everything – her apartment, car, and everything she needed for her baby. Someone posted about it on Tandy’s group, and the parents ended up receiving enough supplies and furniture that the baby could come home from the hospital.

Schools – such as The Caroline School, Harmony Science Academy and United Orthodox Synagogues Goldberg Montessori School – were damaged in the storm. Parents used social media to get the word out about what schools needed and started campaigns on GoFundMe, YouCaring and other fundraising sites.

Michelle LaBombera, a firefighter in Galveston County, never imagined that her “Moms and Ladies” group would evolve in the way that it has after the flood. She originally started it around December 2013 as a way to meet people when she moved to the Bellaire area. Since her schedule isn’t a typical 9-5 job, she wanted to create an easy way to meet other people and ask questions.

“It’s almost constant now,” she said, referring to the growth of the group, which has seen its membership rise from around 1,900 to more than 3,000 since the flood. “Who knows what’s next?”

Hopefully, say those involved, the goodwill on these Facebook groups will stay strong and active as flood victims continue the long process of recovery.

“The bad thing about social media is it does burn people out,” said Michele Poche. “I hope that the momentum behind it keeps going. We all have a lot longer to get there.”

Here are a few resources and links that might be helpful. Please comment with additional resources, opportunities to volunteer or donate to help affected families, and share your story.

Get the 3-1-1
Download the Houston 311 App to easily report damage from the flood.

Help for the Elderly
If you are 60+ years and have been affected by the flood, please call 2-1-1. These special services can apply for relief programs, replace food and medicine, locate alternative housing, arrange for transportation, work on healthcare and prescriptions, and navigate services like FEMA.

Free Storage
Houston area U-Hauls are now offering 30 days of free self-storage to those affected by the flooding, along with providing valuable supplies such as boxes, tarps, propane, and propane tanks.

Editor’s Note: The Buzz team was saddened to hear about beloved neighbors who lost their lives in this flood, and so many others who lost homes and possessions. We were impressed to see community members so actively helping each other. There isn’t enough room in this article to include all the stories of rescue and generosity. But if you have tales of local heroes and efforts to share, leave a comment under this story.

9:00 am to 10:00 am
Location:
Evelyn's Park Conservancy
END_OF_DOCUMENT_TOKEN_TO_BE_REPLACED