Parents to the world 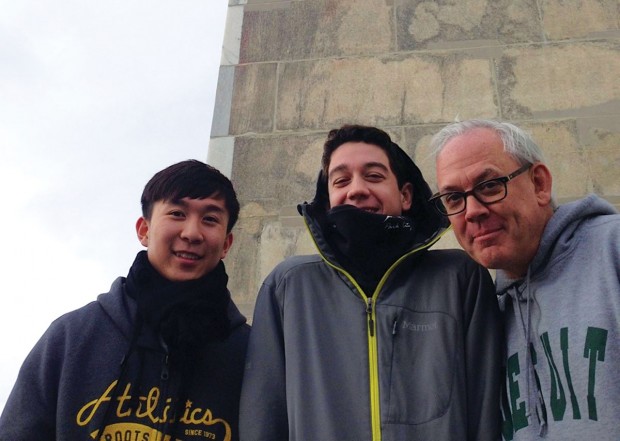 Patrick joined host family members Drew and Jim Barkley on an unforgettable tour of the nation’s capital, one of several road trips the family took to share their country with their Taiwanese exchange student.

It took a hip-hop dancing, NBA-loving Taiwanese student to teach Jan and Jim Barkley something important about life: Once you’re a parent, you’re always a parent.

Their son Drew, 21, had gone off to college at Emory University in Atlanta, and daughter Kate, 18, was off in Belgium having an exchange of her own. Patrick, 18, was the one to fill the empty nest.

“Patrick is funny – he’s a really great kid,” said Jan. “It was fun to see Houston and America through his eyes – this was all new and different to him. We got to see the ideas he had about American lives before he came here. He kept saying, ‘This is not like in the movies!’ He thought we’d all have horses and oil wells in our yards.”

Patrick quickly learned the bike route to Bellaire High School, but Jan still preferred to drive him. “You kind of miss that car time with your kids, when you talk about the things they did during the day – with Patrick it was nice, I’d ask how was your day, and he’d talk about his hip hop dance class.”

Just like a mom, Jan gave him chores and “fussed at him” to do his homework. And like real parents, the couple took him out to the family ranch, where he got to drive a tractor and start a campfire. They carved pumpkins at Halloween and celebrated Thanksgiving and Christmas as they always did. They planned road trips with him, like one to Atlanta to see Drew, one to Washington, D.C. and one out West, just the three of them, to Moab and Canyonlands, Utah. “Those are the kinds of things he’d never done before,” Jan said.

Patrick was with the Barkleys for five months – the first five, as luck would have it. It was hard at first.

So Jan would try a different way. After a couple of months they’d just laugh, and eventually Patrick felt more comfortable asking when he didn’t understand.

“It made me really realize I did have to be careful with him and not use a lot of colloquialisms or sayings that he might not understand, and to use simpler words sometimes,” she said. They would talk about expressions he hadn’t learned in his English class.

Language differences can be the source of much hilarity, as Carol Lester, host mother for a Brazilian student, Felipe, and later an Italian student, Federico, soon discovered.

“I laughed often, and about everyday things,” she said. “Federico getting the chills and telling me he has ‘skin of the duck’ (goose bumps), or seeing the clothes in J. C. Penney and telling me he was in paradise! Felipe, from a town in Brazil, amazed by the selection on the cookie aisle in Kroger and telling me, ‘American cookies are world famous.’”

John Thornton, who serves as regional incoming coordinator for the West University Rotary Club, says hosting an exchange student can be a real eye-opener on many levels. He hosted a Belgian student, Jessica, several years back.

“We thought we’d have a big impact on her, but she had a big impact on us,” he recalls. “We were so focused on showing her the U.S. and everything we had to offer that we didn’t realize what an impact she’d had on us. It made us stop and think about all the things we take for granted.”

Years later he still recalls a conversation with Jessica when he came home from work frustrated, complaining about the bad things that had happened, the traffic, and so forth. “Do you have a bad life?” she asked him. “It just nailed me in my tracks. She started to point out all the things we have. ‘No,’ I said finally. ‘I don’t have a bad life.’”

Nancy Loncarich was impressed with the level of courage it required for a young person to commit to a year abroad. She and husband David received Anaelle, 18, in their home for 3½ months this year, from Thanksgiving to Spring Break.

“I just thought it would be incredibly brave coming to a new country like that,” she said. “I thought we’d want to show her America, show her Texas, show her American ways and customs, that sort of thing, and learn about her culture at the same time. We could not have gotten luckier.” 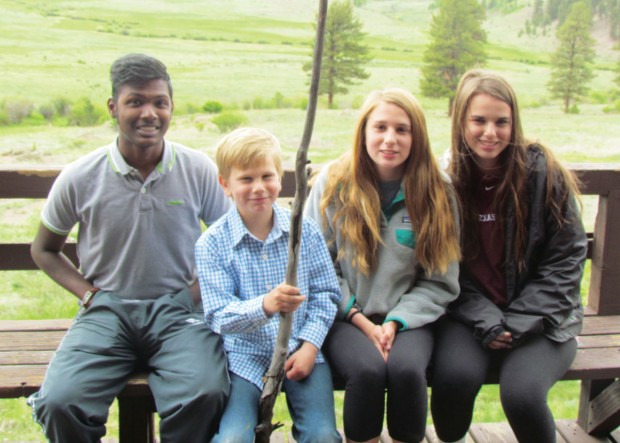 Vimal and his American host siblings, Wylie, Ava and Lily Ward, traveled to Elk Creek Ranch in Colorado, where everybody roasted ice cream cones filled with marshmallows and chocolate over the fire.

For Wesley and Molly Ward, showing off Texas and the dramatic American West has been a major highlight of their Malaysian exchange student’s stay. Wesley and Vimal, 18, were having the time of their lives when they received a call from The Buzz in Amarillo during a cross-country road trip.

“We’re just wiping the sweat off our brows after seeing Cadillac Ranch,” reported Wesley, a state district court judge on a rare two-week vacation. He had taken his guitar, and while they walked around Stanley Marsh’s monument to self-made art, he made a little of his own art. Then they made their way to Palo Duro Canyon State Park and capped off the day watching the outdoor musical TEXAS, set against the spectacular backdrop of the towering canyon walls.

“I love Texas, and I have had just the best time being an ambassador of our state and showing someone from another part of the world how cool Texas is and how much cool stuff there is to do here,” Wesley enthused. “It’s been fun, in addition to showing these things off, just seeing these things.”

Besides the road trip, which took them beyond Texas borders to Albuquerque to see a Minor League baseball game with the Isotopes, Roswell with its UFO Museum, and Vimal’s first real snow in Colorado, Wesley says it’s been fun to share attractions closer to home.

“We’ve been enjoying doing the things around here that you oftentimes don’t do living in your own town, like going to NASA, the Art Car Parade, and Mardi Gras in Galveston. Things you might skip otherwise – but because Vimal was here, we made time in the schedule to do it.”

Vimal says the whole experience has been amazing. “Everything is new – the blue jeans, the hats, the boots,” he said. “Mexican food is one of my favorite foods – I’m going to miss it!”

Vimal made his host parents proud when he overcame his fears – learning to love George, their big yellow lab, even though he was terrified of dogs and had specifically asked not to be placed in a home that had one. And later, learning how to swim, and after just a few lessons, jumping off the cliffs of Inks Lake into the depths below.

Hosting an exchange student is not always easy, and it does require a certain frame of mind, Molly cautioned.

“They’re part of your family, so they know everything,” she commented. “They’re just like a fly on the wall, watching everything you do – watching the good and the bad that comes with family life. You’re opening your family to the most personal glimpse that there could be.”

The relationship will also have a lasting impact for the Wards. “I’m very fascinated to see how his life will turn out and what he becomes,” Molly said. “It’s just like with your own children; you’re interested to see what their life will hold. I feel the same about him. I’m cheering for him, and I will think of him often.”

“This is a volunteer job, 24-7, for six months,” said Molly, “but the impact is going to be amazing for the student. It really does make the world a better place to do this. It seems like it’s small, but it’s hugely impactful to our world.”

Jan Barkley, too, offered advice to families who might be considering taking on an exchange student.

“I would highly recommend it,” she said. “You do need to make sure you have the time to give to it. It’s extremely rewarding if you do, because you learn so much from the kid and they’re so grateful.

“It was challenging but also rewarding at the end. You could see the changes; his language skills were so much better and his confidence level was so much better. As a parent it’s very rewarding to see that – even if it’s a kid you have for five months.”

Carol Lester, who recently returned from Italy to see Federico, now serves as a youth exchange officer for the West U Rotary. “If you enjoy young people, you would love this experience. These kids arrive scared and nervous and place their trust in you to guide them. It is a gift to be able to touch a life in such a dramatic and memorable way, and make no mistake, their exchange year will forever be the best year of their entire lives.”

Editor’s note: The cost of hosting an exchange student is just the basic cost of living, plus whatever extras each family chooses to provide. Rotary provides its exchange students with a cell phone and a stipend of $125 per month. For more information, see www.westurotary.org or contact John Thornton at [email protected] or 281-415-6390. For a student perspective, see “Travel Buzz: Youth exchanges shape lives” in this issue of The Buzz.