From Rory to Frankie 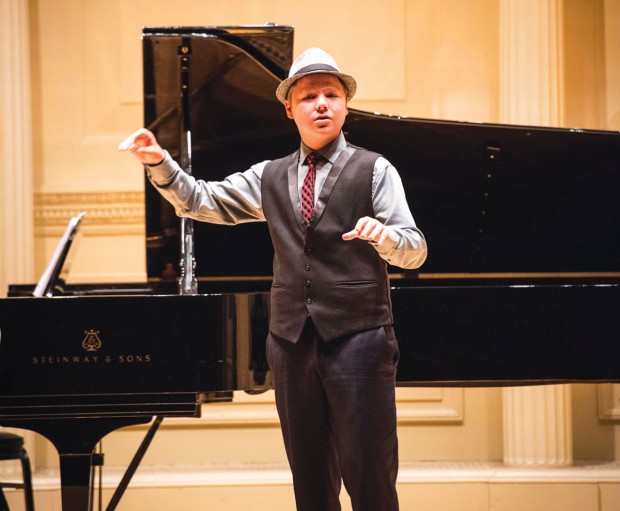 Rory Leech, a freshman in theater at The High School for the Performing and Visual Arts, performed at Carnegie Hall in New York this summer.

This summer, Carnegie Hall in New York was alive with the sound of young Houston musicians when 45 students and seven faculty members from Vivaldi Music Academy performed in the Weill Recital Hall. I am a voice student, and I discovered how terrifying but thrilling the whole New York experience can be.

For many months, I had been prepping my song, Can’t Take My Eyes off You by Frankie Valli and The Four Seasons, which featured in the hit Broadway musical Jersey Boys. By the day of the big performance, I was a nervous wreck, but incredibly excited. When I arrived at Carnegie Hall, I was amazed at the beauty of the recital room, a shining piano under two crystal chandeliers, and I wondered which other performers had performed on that stage before me.

The show began with our strings ensemble, followed by a fantastic line-up of musicians singing and playing violin, cello, piano and guitar. We even had two composers performing pieces they had written themselves.

In particular, 6-year-old cellist Nicholas Wong brought the audience to their feet. Everyone was so impressed with his playing that he was even signing autographs at intermission.

I was the last student to perform, and when I was brought backstage 10 minutes before I was due to go on, I was literally jumping from foot to foot to keep my nerves at bay. But as soon as I walked out onto that phenomenal stage, Rory Leech disappeared and Frankie Valli took the spotlight. Although my performance was over before I knew it, and I could finally breathe a sigh of relief, I knew it would be an experience I would treasure for the rest of my life.

Next, it was the teachers’ turn, as my incredible voice teacher, LaDonna Jackson, stopped the show with her rendition of Summertime from Porgy and Bess. The crowd rose to its feet again when violinist Zeljko Pavlovic, who founded the Academy, was joined onstage by his father Branko Pavlovic, on basprim, to perform Djelem Djelem.

We all had a great evening as Houston took New York by storm.