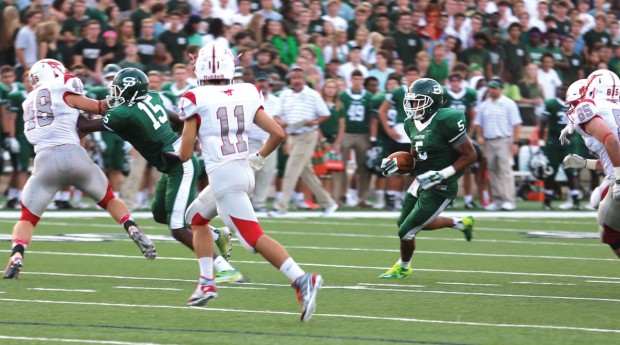 Stratford Spartan and Texas A&M commit Rakeem Boyd breaks free for big chunks of yardage in the Spartans’ season-opening victory over Memorial. The victory was Stratford’s first over Memorial since the 2007 football season. (Photo: Rusty Graham)

Back in 2007, a junior quarterback by the name of Andrew Luck led Stratford to victory over the rival Memorial Mustangs. Of course, Luck is now an NFL superstar, but back at his high school alma mater, the Spartans had gone winless against Memorial since that 2007 game – until this year’s decisive 34-7 season-opening victory over the Mustangs.

Quarterbacking the 2015 version of the Spartans is senior Michael Milstead, who posted some big passing numbers in the victory, including three touchdown passes to wide receiver Torin Justice. “It was a great team win,” said Milstead. “Our offensive line gave me a lot of opportunity to throw the ball, and our defense kept putting us back on the field. Also, I just threw it up to our play makers, and they made the plays.”

One of the major play makers again for the Spartans this season is highly recruited running back Rakeem Boyd, who is coming off a spectacular season in which he rushed for over 2,000 yards. While Boyd just recently committed to play college football at Texas A&M, the senior sensation is more focused on leading a highly ranked Stratford team to a deep run in the post-season playoffs. “I definitely want to see us make a run at state,” said Boyd. “The Memorial game was a lot of fun and was definitely a great way to kick things off.”

Also certainly pleased with the victory was Spartans head coach Eliot Allen. “I have a lot of respect for Memorial,” said Allen. “Hopefully, that type of victory will propel us to a great season. It was a really good win for our program.” 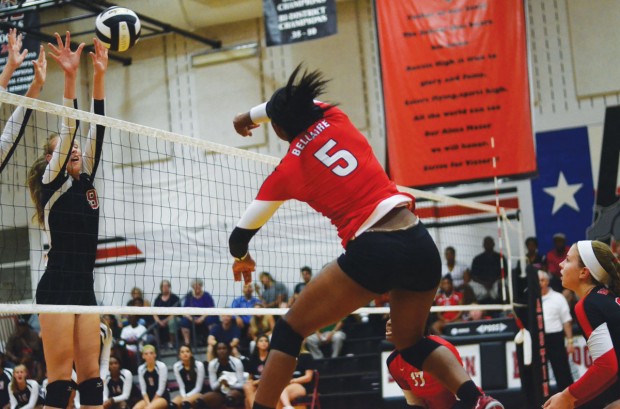 Bellaire senior captain Jade Robinson is a big hitter for the Cardinals volleyball team. One month into the season Bellaire was ranked 15th in the state, marking the highest statewide ranking in school history. (Photo: Laura Ogden)

In volleyball, the Bellaire Cardinals jumped out to a spectacular start to the season, having won the championship of the Spring Branch ISD tournament, and then finishing in the top 20 among a field of the state’s top 88 teams in the prestigious Pearland tournament. In addition, the Cardinals were ranked 15th in the state one month into the season, marking the highest state ranking in school history.

“We have a group of talented, hard working and disciplined kids,” said Cardinals head coach Ap Clarke. The Cardinals’ roster boasts several talented players, including senior outside hitter Sundara Chin, who was named the MVP of the Spring Branch tournament. “Sundara is an explosive, 6-foot, left-handed hitter who leads us in kills,” said Clarke.

Also leading the way for Bellaire are junior twins Maya and Megan Evans. Maya is a mid hitter while Megan is a setter for the Cardinals. “They know each other so well,” said Clarke. “Megan just feeds Maya perfectly. Maya also leads us in blocking while Megan has great hands and sets the tempo for our team.”

Other top players, according to Clarke, include junior libero (defensive specialist) Ella Hawes and senior outside hitter Jade Robinson. “Ella does such a great job getting the ball to our hitters, while Jade is one of our senior captains. She’s an extremely hard hitter and an especially great blocker.” 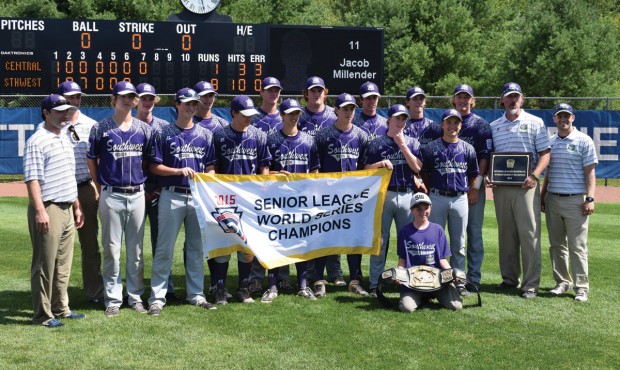 Just before the start of the school year, several local baseball players earned the distinction of World Champions, with the West U Senior League All-Stars winning the Senior League World Series for the second year in a row, and for the league’s third world title.

“We’re just blessed with extremely talented kids who grew up in the same general area in West U,” said West U All-Stars manager Chris Sauls. “It’s really pretty incredible. We’re the only USA team to ever win back-to-back championships and also the only USA team to win three World Series titles. This year’s team is pretty much the same core of kids that won it all last year.”

The core of players was led by Jimmy Winston and John Doxakis, who had outstanding tournaments both on the pitching mound and at the plate for West U. Doxakis was the only player in the entire World Series who had a home run in the tournament. Doxakis and Winston are also two of several players on the West U team who play high school baseball at Lamar.

Outfielder Jared Burch (Episcopal H.S.) and catcher William James (Strake Jesuit) both had multiple-hit games in the tournament, including several key at bats in the championship-game victory over the Central USA team. Joe Gobillot was the winning pitcher in that title game and was relieved by Jacob Millender.