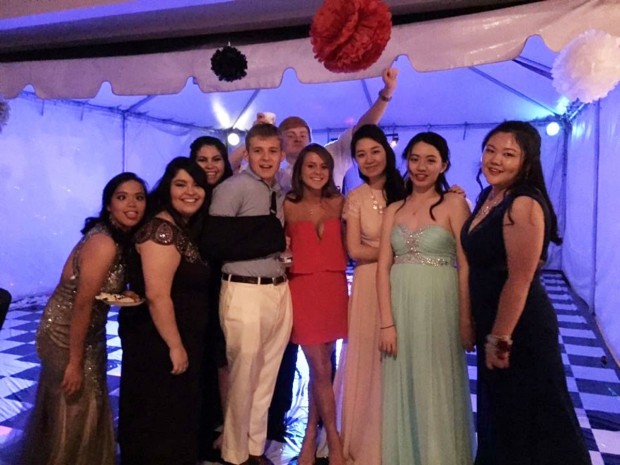 Unlike most high schools, Alexander-Smith Academy does not have prom, but as prom is special, I thought it would be amazing if we threw a prom ourselves. Thanks to my mother, Sarah Boyd, and fellow senior Madison Baty’s mom, Kathy Baty, Madison and I were able to throw a fancy and exciting ball-themed prom!

Madison and I had to make “Save the Date” cards, which included the themes people could vote on and two different dates to hold the prom. Madison and I were up really late one night working on the cards at her house, and I didn’t get home until about 1 in the morning. When we finished, Madison and I couldn’t wait to see if the others liked them.

We had a few minor setbacks when it came to picking a date and a theme. Most students were unsure of which dates would work for them and they didn’t know which theme to vote for. Once we received all the votes, Kathy Baty made these beautiful invitations to prom and mailed them out to each senior. It was hard to get everyone’s money in on time, and we were worried there weren’t going to be a lot of people there, considering the fact that we’re already a small school. 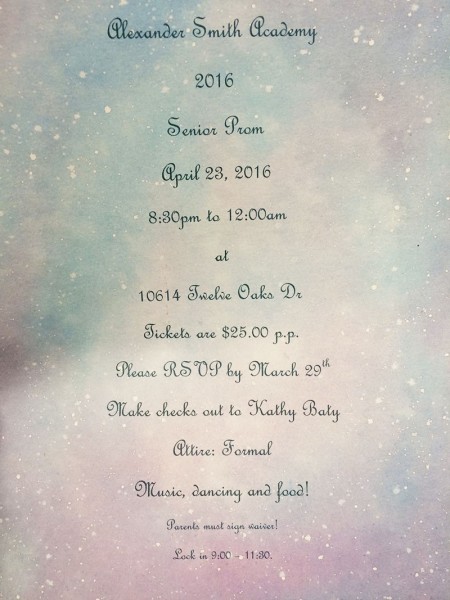 By the time it was the night of prom, there were plenty of people there and prom ended up being a huge success! Our Dean of Students (and one of our favorite teachers) even thought it was wonderful!

Ms. Rameau said, “It was very nice! All the entertainment and decorations were lovely. The girls looked so cute and pretty! I was very surprised with how everything turned out; it was very well done. The food was nice; the DJ was very good.”

Senior Sam Moghaddam elaborates, “It was a pretty exciting moment. Kinda showed that we’re all growing up and that our last year is coming to an end sooner than we expected.”

When I first walked through the door to the backyard, I was so shocked. Ms. Baty looked at me and asked jokingly, “What? Did you have no faith in me?” And we both just laughed and I told her I just didn’t expect everything to look the way it did.

I knew she would do an amazing job; it just turned out to be better than I ever imagined. She turned their driveway into a food area and put a tarp over the open end of the driveway, turning it into a dance floor. There was a checkered mat to cover the concrete ground and they had Alexander-Smith labeled napkins and straws. I could not have asked for a more beautiful and amazing prom.