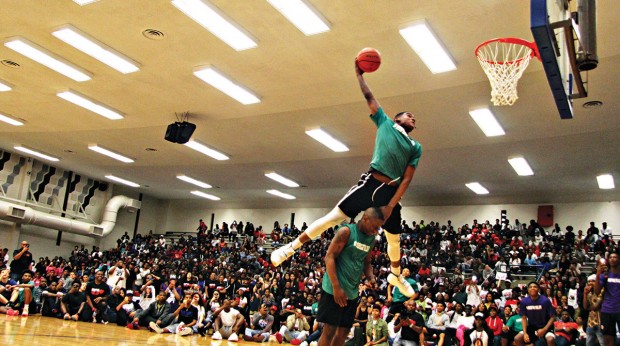 Bellaire High School basketball player Deon’ta Lagway was soaring high during the slam-dunk competition of the Hooping For Luv benefit basketball games. The Cardinals senior was a driving force behind the event, which raised funds for the families of Houston teens killed in a Spring Break car accident. (Photo: Bruce Bell Media)

In the aftermath of tragedy, the students of Bellaire High School held an emotionally charged celebration called Hooping for Luv, a trio of all-star basketball games to raise funds for the families of the four victims of a Spring Break car accident.

The accident took the lives of 18-year-old Bellaire Cardinals volleyball star Jade Robinson, her 19-year-old sister Brianna, who herself was a former track star at Bellaire, and 17-year-old former Bellaire student Brittanie Johnson. Shelby Coleman, an 18-year-old senior at Lamar High School, was the only survivor of the accident.

A standing room-only crowd of about 2,000 turned out to HISD’s Butler Field House for the games, which featured many of the area’s top basketball players. “I’m just amazed how our students put together such a great event in a short amount of time,” said Bellaire volleyball coach Ap Clarke. “It was totally the kids who did all of this.”

The idea for the event originated from Bellaire senior basketball player Deon’ta Lagway, a former boyfriend of Jade Robinson and a close friend of Jade’s family. “I felt like we owed it to them to have this big event and donate the money to the families. I knew the girls my entire high school life, and I just wanted to help out and make them proud and make their families proud.”

Lagway played in the all-star event alongside Bellaire teammate Maxwell Evans. “It just feels so good that all these great high school players from across Houston came together to play for something special. It means so much to a lot of people,” said Evans.

With a lineup of who’s who in Houston high school basketball, the games themselves evolved into a highlight-reel, slam-dunk festival. But the highlight was how the Bellaire and Lamar communities rallied around the families of the girls.

“Obviously, by all the people who are here you can see how those girls touched so many lives, even way beyond Bellaire High School,” said Bellaire sophomore volleyball and basketball player Cody Fillmore. “We just wanted to have an event that brings everybody together as a community.”

“Jade would just light up a locker room,” said Bellaire sophomore volleyball player Sharea Washington. “She’d come in and yell out, ‘Hey, everyone,’ and always put a smile on everybody’s face. Jade just had that personality that when you were having a bad day she would just brighten you up.”

“Jade was just a special person on and off the court,” said coach Clarke. “On the court, she was a hard-working player who just loved to play volleyball. Off the court, Jade was a lover of life.” 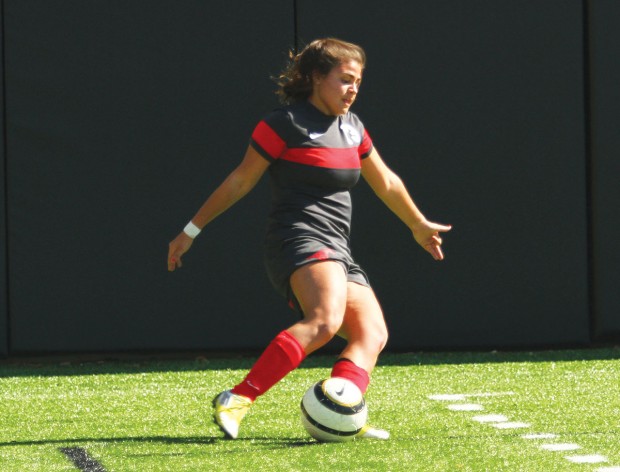 Memorial High School senior Giuliana Madrigali helped lead the Mustangs’ girls soccer team to one of the best seasons in school history. The Mustangs were 21-1 during the regular season.

In other news, on the soccer fields, it’s been one of the greatest seasons ever for the Memorial Mustangs girls’ soccer team. The Mustangs won 21 of their 22 regular-season games, followed by a 3-0 shutout over Cy Fair in the bi-district playoffs. The only regular-season loss of the year for Memorial was when the Mustangs were without three key starters who were still playing basketball at the time.

“I have an extremely competitive group of girls who really enjoy playing soccer with each other,” said Mustangs girls soccer coach Lindley Amarantos. “They go out there and battle hard game in and game out.”

Among the so-called battlers is senior Giuliana Madrigali, who Amarantos calls the heart of the team. “Giuliana is a vocal playmaker who sees the field really well. She led the district in assists this season.”

Amarantos had praise for several other players, including senior Kate Rottino, freshman Grace Collins and sophomore Grace Youchum. “Kate is one of our captains. She’s just a really consistent player who’s always doing the right things on the soccer field.”

Collins, only a freshman, led the team and district in goals with 42 goals in 22 games. “That’s pretty spectacular,” said Amarantos. “Grace is extremely fast with an excellent left and right foot. She’s already being looked at by some of the top colleges out there.”

As for Youchum, Amarantos describes the sophomore midfielder as a tremendous athlete who does amazing things with the ball. “Grace is just a lot of fun to watch.”