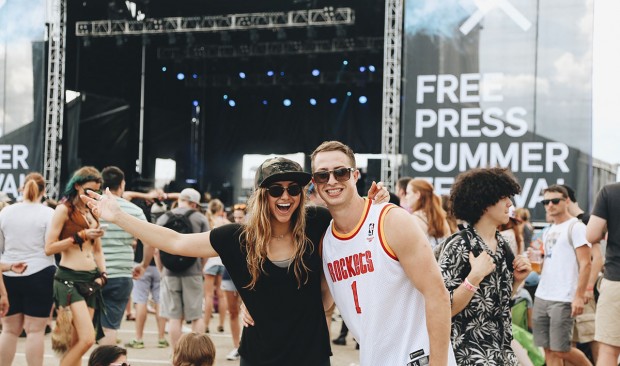 (From left) Cassie Schafman and Matt Hoffman, both passionate about music, covered Free Press Summer Festival for The Buzz. Cassie sings and is a photographer and Matt DJs under the stage name Matt Murdock.

This was my second time attending Free Press Summer Festival, and what a wild time this one was compared to the last I attended in 2013. My friend Cassie Schafman, also a Bellaire High School graduate, and I definitely got the full experience – starting with a possible rainy day on Saturday that ended with little to no rain, a weather evacuation on Sunday, and finally re-entry to the festival and a change in set times for the Sunday night headliners. A few of these acts included 3LAU, Big Grams (Big Boi & Phantogram), The Chainsmokers and Deadmau5. 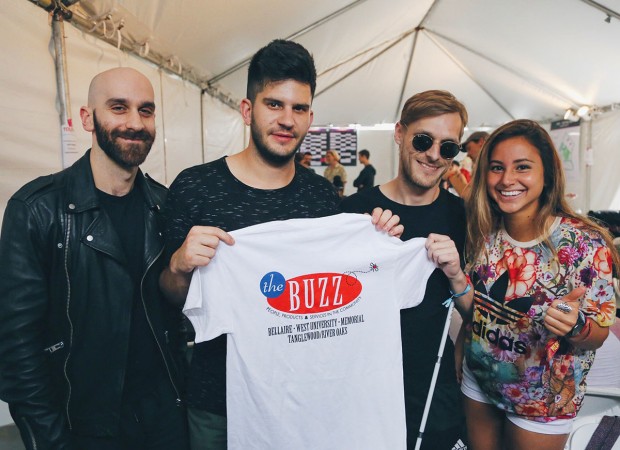 Cassie Schafman (on right) with X Ambassadors after she interviewed them with Matt Hoffman.

One of our highlights of the festival was when Cassie and I got a chance to sit down and talk with the X Ambassadors before their performance on the main stage on Saturday afternoon. Hear what they had to say in this audio interview. 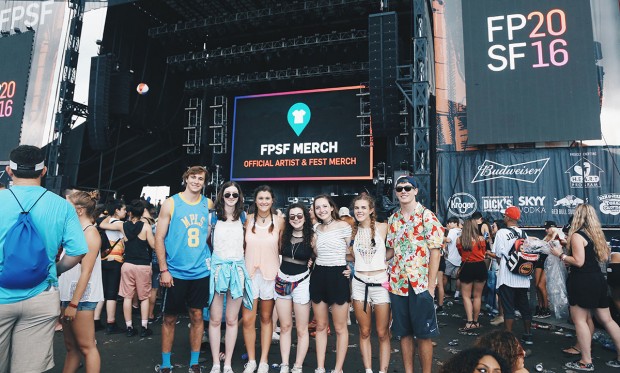 We spotted a few Buzz residents at the festival on Sunday afternoon, so we asked them which acts they were most excited to see. Almost everyone’s answer was the same: The Chainsmokers. This came as no surprise to me. Dance music has taken over, especially with this younger generation. As big as The Chainsmokers are right now, they somehow manage to keep getting bigger. I knew to expect their set to be one of the most packed crowds at the festival after seeing them at Coachella this past year. I had never witnessed so many people fighting to see an act like I saw with the Chainsmokers. It was madness. Sure enough, when it came close to their set time in Houston, we got to experience a weather evacuation. 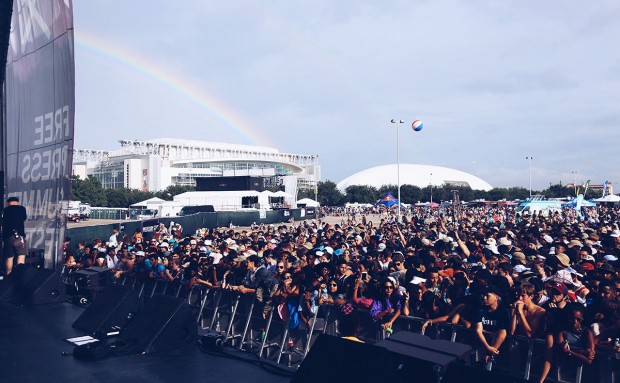 After the rain comes the rainbow. (Photo: Cassie Schafman)

If I had to pick a favorite act from the festival, it would have to be Collegrove (Lil Wayne & 2 Chainz). As a huge fan of both artists I had really high expectations for this set, and they did not disappoint. The track layout and order was phenomenal. It was truly perfect - genius - and so well-put together. As a DJ myself, I am a pretty tough critic. I expected Lil Wayne to take over but was pleasantly surprised by 2 Chainz. I can safely say that I honestly think that he outperformed Lil Wayne. However, the two of them together had a fantastic chemistry on stage, which resulted in a crowd energy that was unmatched by any other act I saw all weekend.

Were you at Free Press Summer Festival this year? What was the highlight for you? Comment below to let us know, and share your festival pics with us at [email protected]. 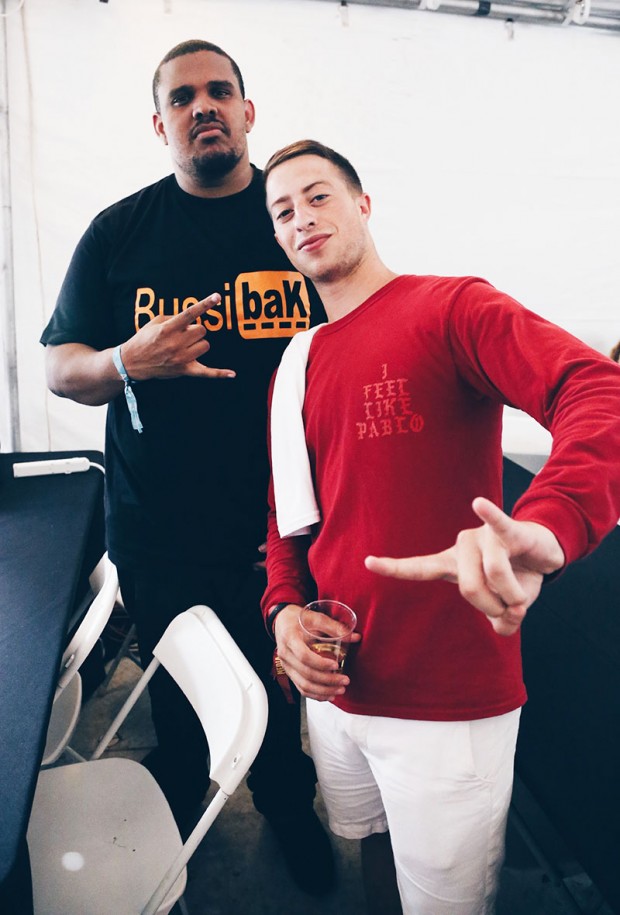 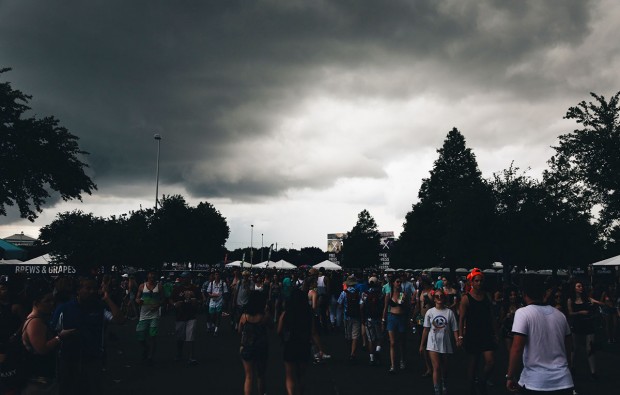 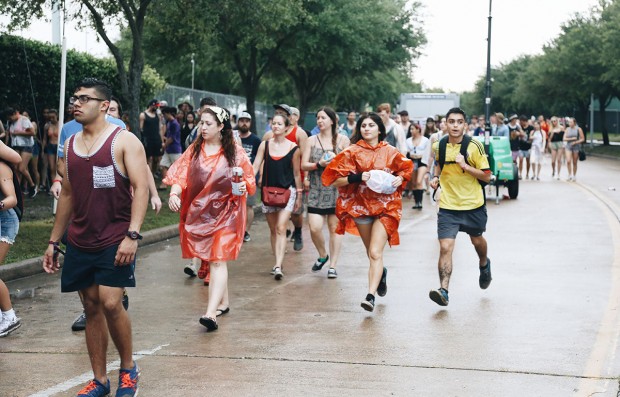 Fans flooding the gates to return to the festival. (Photo: Cassie Schafman) 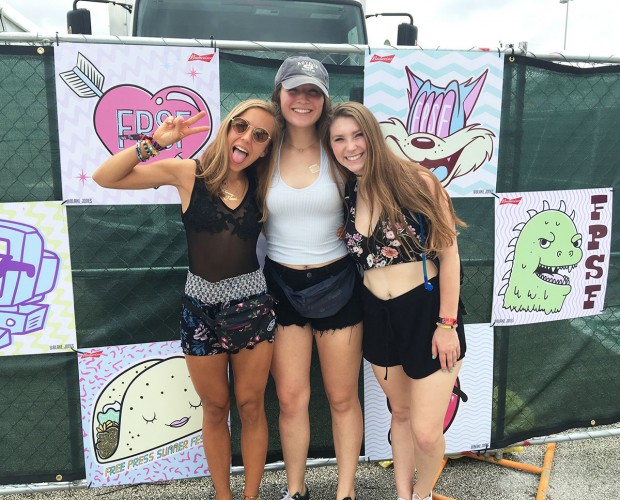 Houston Christian School graduates reunited to enjoy FPSF. (From left) Karina Arnold, Becca Doucet and Haley Morris. Karina and Haley are rising sophomores at the University of Oklahoma and Becca is a rising sophomore at Louisiana Tech. 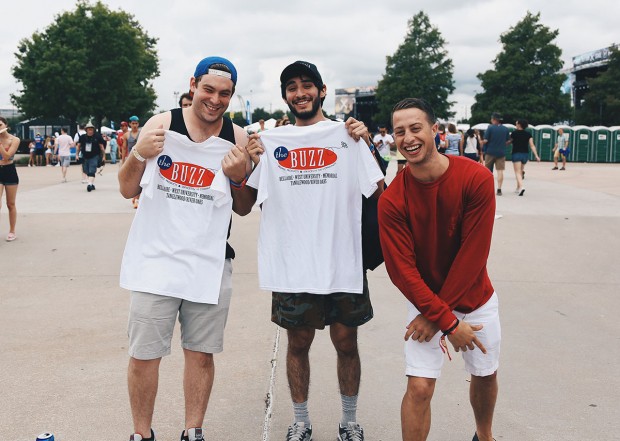 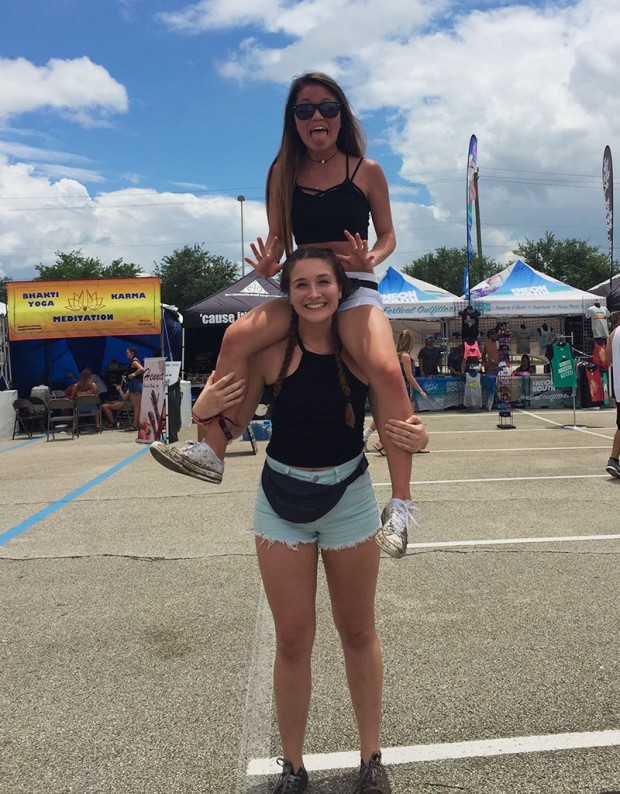 Becca Doucet (standing) and Maddy Payne are both graduates of Houston Christian High School. Becca is a rising senior at Louisiana Tech University and Maddy is a rising sophomore at the University of Oklahoma. (Photo: Sarah Oldfield) 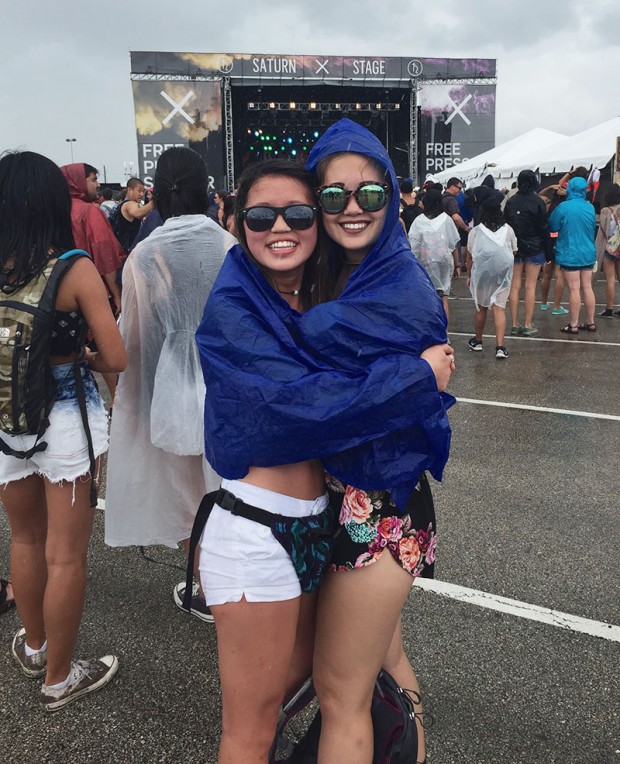 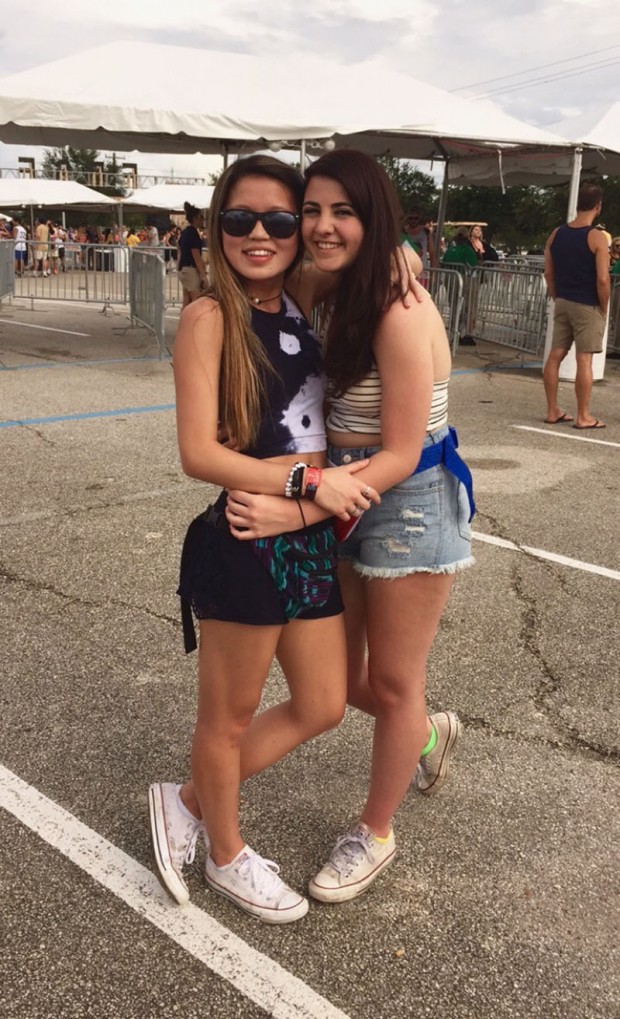 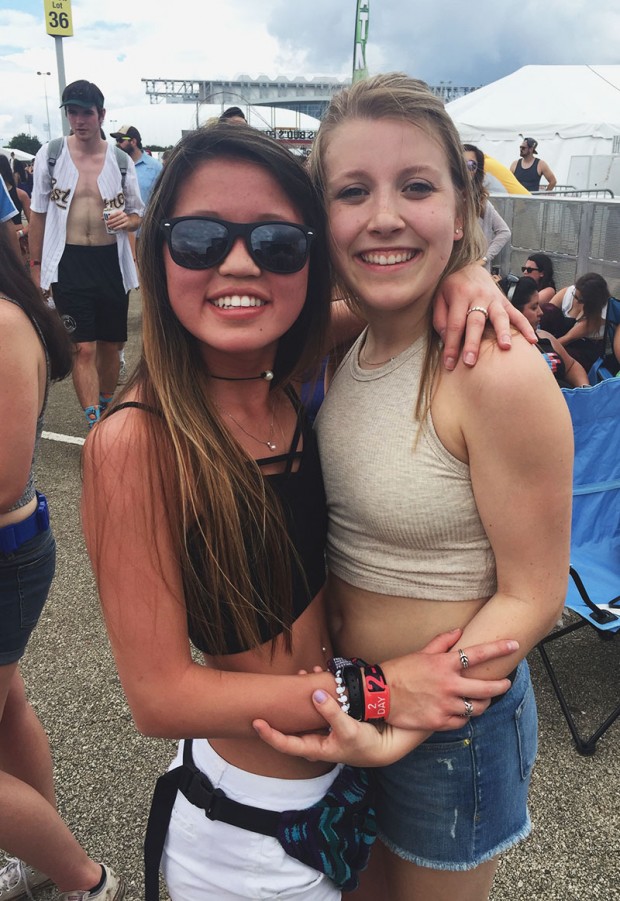 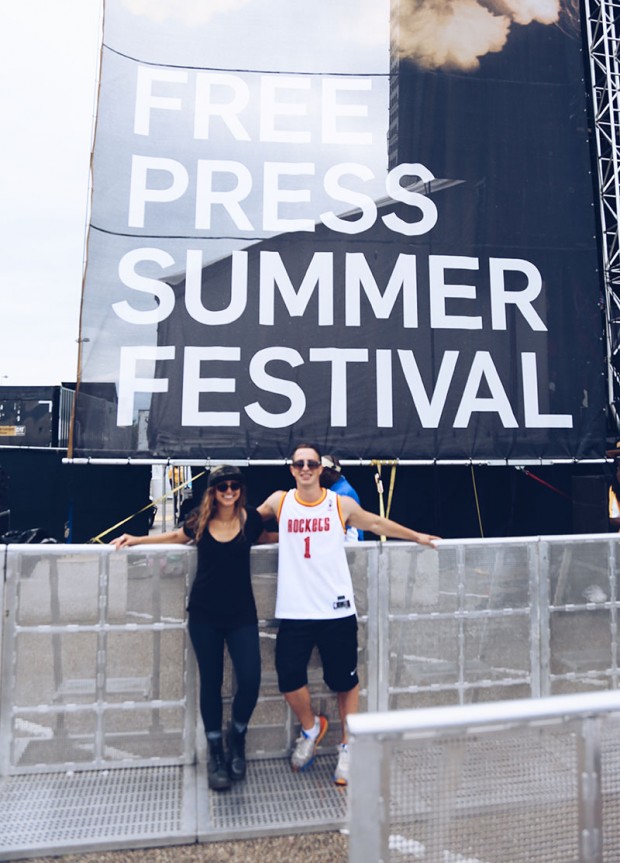 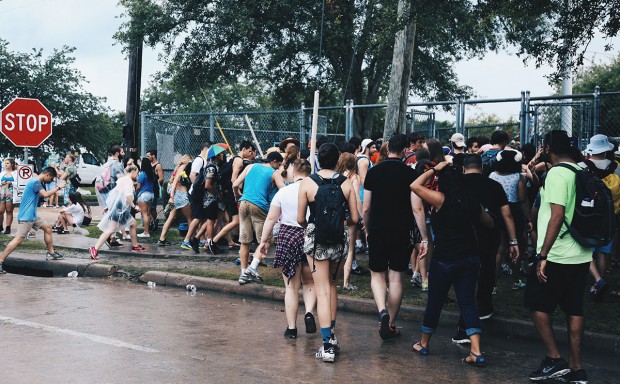 Fans heading out of Free Press Summer Festival to take cover in NRG or their cars. (Photo: Cassie Schafman) 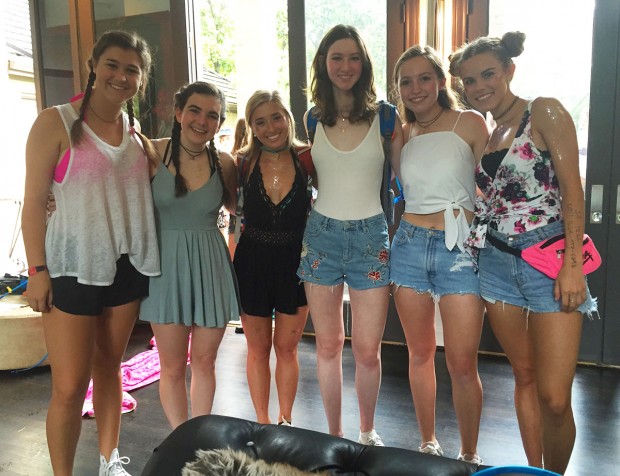 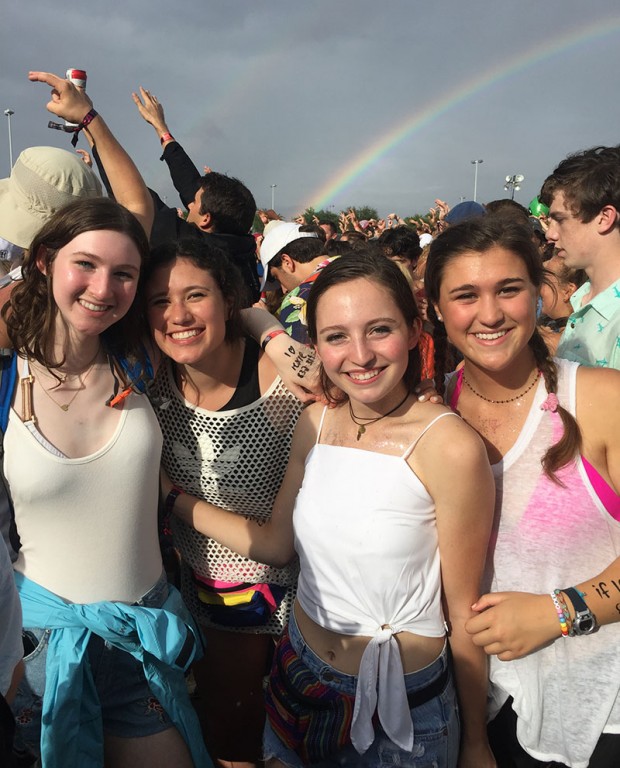