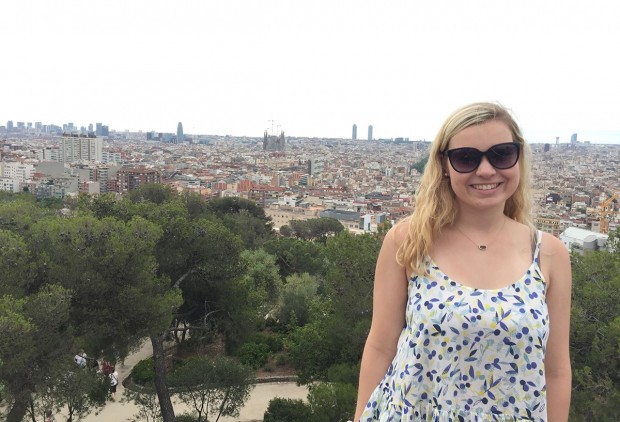 Haley Kurisky is pictured here wearing her favorite pair of shades in front of the skyline of one of her favorite cities, Barcelona. Barcelona has temperatures similar to Houston, so she wore sunscreen and sunglasses the entire time she was there.

I never thought it would happen to me. I always wear hats and sunscreen, I’ve never tanned in a tanning bed, and I limit my time outside in the sun. But skin cancer doesn’t have any mercy.

During the summer of 2013, right before my senior year at Memorial High School, my parents alerted me of a mole on my back that they saw while we were at the beach. We decided, for cosmetic reasons, that it was best to remove the mole. A few days after getting it removed at my local dermatologist, my family got a call that we should go into MD Anderson. There they told us that the mole had tested positive for melanoma, and that we needed to take swift action to remove other cells around the area of the mole that could be cancerous as well.

Through what seemed like pure luck, we were able to schedule an immediate surgery the same week of the diagnosis to remove the cancer and lymph nodes (where the cancer would have spread), done by one of the best surgeons at MD Anderson. After weeks of nervous waiting, we found out that all the cancer had been removed, and it had not spread to the lymph nodes. I was clean.

Recovery was tough, as I had three new, huge scars on my body from the surgery, which forced me to stop swimming - I was the senior captain of the MHS swim team at the time - for over two months. During that time, my surgeon told me that my scars were too delicate for me to lift anything, so I had to recruit friends and classmates to help me carry my backpack and books around school. At the time it was embarrassing and scary, especially since I hadn't really told anyone about what had happened.

As time passed, though, I embraced my scars as "battle scars," and I'm proud of what I went through, because I survived. I'm sure my bout with cancer was nowhere near as traumatizing as what others have had to go through, but it was a formative experience for me that has allowed me to use my voice to help others. I tend to believe that everything happens for a reason, and I think my cancer was a springboard to encouraging me to spread the message of sun and skin safety to others, especially young people. I hope I can turn what happened to me into something good for someone else.

I was extremely lucky that it was caught early enough to be treated without going through chemotherapy (I had great doctors and I couldn’t have asked for more supportive parents), but I was shocked that at 17 years old, going into my senior year of high school, I was having to worry about a lethal disease that I had no control over.

Young people often think that they are immune to diseases like skin cancer, since cancer is often experienced in older people. This is a common myth. Cancer (especially skin cancer) targets everyone, and if you allow yourself to get a few really bad sunburns, you are putting yourself at serious risk, no matter how old you are. Although I’ve always been careful in the sun, a strange cell mutation occurred.

The scary thing is that you can be careful and still get skin cancer, as shown by my story. So why put yourself even more at risk by purposefully tanning for a long time and getting burnt? It’s not that hard to protect yourself, so make sure you’re taking the necessary steps to do so. As an avid beach-goer, I was terrified that I would never be able to go outside again, but there are ways to be safe and also spend time outdoors. Here are a few of my go-to steps to protect myself in the sun so that I can enjoy being outdoors.

Overall, use common sense. If you start to feel your skin frying, get out of the sun. Leave a few extra minutes each morning for sunscreen application. Don’t get in tanning beds. Your beautiful skin will thank you later.