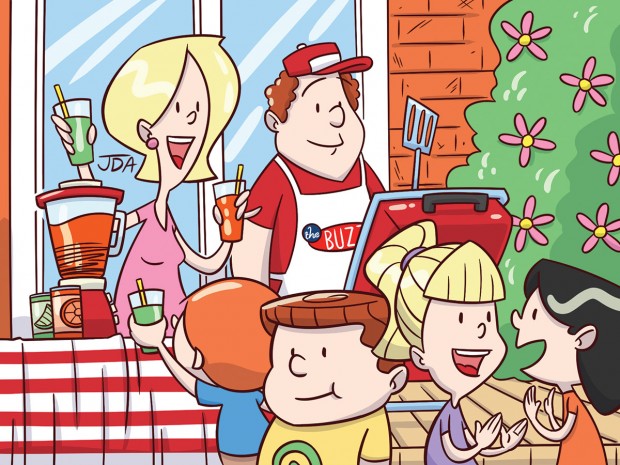 To survive the summer heat, we’ve surveyed a few neighbors to get their takes on the best icy drinks to swill and serve – and hopefully lower our body temps by a few degrees. Here’s what they came up with.

Caroline’s Summer Lime Slushy: In a Vitamix (or another powerful blender), blend a can of frozen limeade, ice and water.

An unnamed West U mom

“For the past six years I have appointed myself ‘cocktail coach’ for our summer tournament softball teams. I do a mixture of yummy Italian flavored soda (buy at Central Market), like peach, raspberry and lavender, mixed with a white wine or red wine or champagne. Maybe I’ll throw in some fresh fruit. Then blend with ice in the blender and put the chilled concoction in a big, portable jug. Voila – there’s your ‘Waveade’ or ‘Stormade’ (insert name of your team)! It makes for a much more enjoyable experience during those hot summer days on the bleachers.”

“Mornings, Bloody Marys. Afternoons, Pimm’s Cups. With cucumber. Evenings, vodka – Tito’s – and tonic with a lime. On the water, beer.”

Commander’s Palace Bloody Mary: Fill a tall glass two-thirds full of ice. Add 1½ ounces vodka, 1 teaspoon prepared horseradish, 1 teaspoon Worcestershire, 2 dashes Tabasco, 4 dashes Crystal Hot Sauce and ½ cup V8 or tomato juice. Cover the glass with a shaker, shake well, and then let the drink rest in the shaker. Wet the rim of the glass and coat with Creole seasoning [like Tony Chachere’s]. Pour the drink back into the glass and garnish with freshly ground black pepper and one piece pickled okra.

Pimm’s Cup: In a shaker, muddle a cucumber slice. Add 1½ ounces Pimm’s No. 1, ½ ounce gin, 1 ounce fresh lemon juice and ¾ ounce simple syrup (equal parts water and sugar, brought to a boil and stirred until sugar has dissolved). Shake. Strain into a highball glass filled with ice. Top with soda or sparkling water. Garnish with a cucumber slice and a mint sprig.

“The American Mule was my favorite last summer! Using Tito’s instead of a Russian vodka changes the name from Moscow Mule to American Mule. We were drinking these in Colorado last July, so it was fun to bring a little Texas up there. (In case you are not a vodka drinker and are not in the know, Tito’s is distilled in Austin.) The copper mug is an absolute must, as it makes the drink nice and icy cold.”

Laura’s American Mule (from goop.com): Pour 1½ ounces Tito’s vodka and 1 ounce lime juice over ice in a copper mug. Add ½ ounce simple syrup (equal parts water and sugar, brought to a boil and stirred until sugar has dissolved). Top with 4 ounces ginger beer, and garnish with a slice of lime or skewered crystallized ginger.

“The ‘John Daly.’ Arnold Palmer is a famous golfer, and he somehow became associated with a drink that is half lemonade, half sweet tea, called an Arnold Palmer. John Daly is another famous golfer, but he’s most famous for being a party animal who may have played some major tournaments while under the influence. So, when you add vodka to an Arnold Palmer, it becomes a John Daly. The best summer beverage I’ve ever had. A bartender told me I should patent [my recipe].”

“Our favorite is a Captain Crunch shot. We were in Hawaii with my husband’s company, and everyone was like, ‘We need to teach you these great shots!’ Let’s just say we tried three. Now we make them at home. This is a fun one to have around when we have people over. It’s also great to play the Fireball song by Pitbull while serving them!”