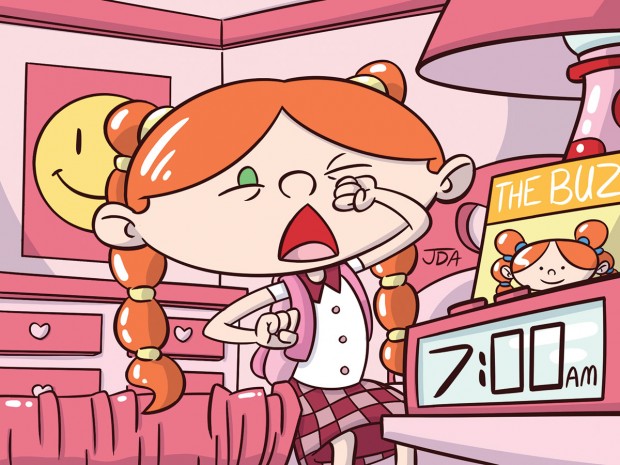 It can be challenging getting kids up and out on early mornings. One tip: Put them to bed the night before in their school clothes. (Illustration: behance.net/runamokstudios)

Realtor Laura Mayer Cyprow has the morning get-to-school drill down. “They wake up at 7, they brush their teeth, they come downstairs for breakfast, they grab their backpacks, and we walk out the door at 7:22.”

Back up. All this in 22 minutes? With no drama? What have I been doing wrong all these years?

Laura’s answer: Pack lunches the night before. And put your kids to bed in the clothes they’ll wear to school the next day.

“This all started because Lilly likes to sleep late,” Laura says. “She was going to kindergarten, and West U starts very early at 7:35. Jared [Laura’s husband] was in business school, so there was a lot going on. Lilly was very worried about having to wake up and get to school. She didn’t like to get up that early.

“And I just said, ‘You know what? This is going to make our life a lot easier.’” And so it began that Lilly Cyprow has slept in her school clothes every day of her elementary school life. This fall, she starts fifth grade.

Wearing school clothes to bed wasn’t Laura’s first option. “When Jared was in school, I couldn’t spend an hour getting kids to bed at night. They each had their own bedrooms, but I had Lilly start sleeping in Wyatt’s room. There was one bedtime, and it helped get everyone up in the morning. It was hard to start because it was almost like a slumber party at first, and I’d have to go in there. But then they got used to it and it worked. Also listening to their conversations was so cute!”

When the children outgrew that arrangement was when Laura started planning outfits ahead of time. “But if you put the clothes at the end of the bed and say, ‘Get ready in the morning,’ they can change their mind,” she says. “So that didn’t work.

“This way, we are not rushed at all. We are not panicked. It’s wonderful. Down to a science. And Lilly is happy because she would rather sleep.”

Just to clarify: Wyatt, who enters seventh grade this fall, does not sleep in his clothes. “He’s a boy,” Laura says. “I don’t even know if he brushes his hair in the morning.”

According to Randi Rubenstein, an author, parent coach and mom of three, not knowing the full routine is a good thing. “Kids should own their own schedules,” she says. “What that means is you’ve communicated to them ahead of time that they set their alarms, wake up, get ready, make their beds. You are not the police.” Randi does allow that it’s fine for parents to “walk around to be sure everyone’s up.” Just remember they’re in charge.

“Kids as young as kindergarten or younger are fully capable of doing this. The stress,” Randi says, “comes from mom taking it all on herself and thinking it’s her job to get everyone ready.”

Where to begin? “The biggest thing is to just communicate your expectations ahead of time in a non-relevant moment,” Randi says. “You’re not going to spring on them at 8:30 the night before school starts, ‘Y’all need to go to bed now.’ You’ve talked about it and let them know the plan before you’re in the moment. Because when you handle anything in the moment, you’re going to get power struggles and resistance.”

Randi walks her talk, communicating the plan to her children ahead of time. They know to expect an earlier bedtime two days before school actually starts, and they know she’ll be waking them up before 8. “Summer is basically over,” Randi says. “So the whole family has dinner earlier, and the kids start organizing, making sure they’ve got all their supplies and backpacks ready. We get stuff in order as if school had already started; then it’s not a mad scramble the night before.”

Randi’s kids – 18, 15 and 10 – “own their stuff” with one exception: “I do make breakfast myself, because it’s important to me that everyone leaves the house having a decent breakfast,” she says. Randi and Laura both like smoothies in the morning.

“I’m certainly not Holly Homemaker,” Randi says. “But these tips work; they’re not BS. I’m a naturally disorganized mess. But [following this plan], I can send my kids off to school not from a place of tension. They’re coming from a better place, they’re a better friend, a better student. It all counts. And it makes for a happier existence.”

“Put half of a banana, a very ginormous scoop of peanut butter, a squirt of agave and milk into the container of an immersion blender. To gauge the milk, I fill the container the blender fits into to the line. That’s it. Depending on how sweet the banana is, add more or less agave. I pour a little into a glass for Lilly, and Wyatt drinks his directly from the container.”

Toast three frozen waffles. Spread one with peanut butter, sprinkle one with chocolate chips, and place a large marshmallow on the third. Toast again lightly. Stack and serve. (Usually served with a glass of milk and a bowl of strawberries.) “Hey,” Barbara says, “everyone eats this, and no one complains!”

Make steel-cut oatmeal according to package instructions. They take about 25 minutes to cook, so Karen Edelman says, “I’m coming to the kitchen to let the dog out when I wake up, then putting on the pot of oats. While they simmer, everyone’s getting up, dressed and ready for the day. By the time we come back downstairs to the kitchen, the oats will still be hot and ready to serve without me being tied to the kitchen.”

Karen makes an “Oatmeal Bar” by serving the cooked oatmeal with do-it-yourself toppings. “I have containers with different toppings,” she says. Think berries, brown sugar, dried fruit, nuts, Nutella and cinnamon. “Something hot, healthy and individualized to each one’s taste.”