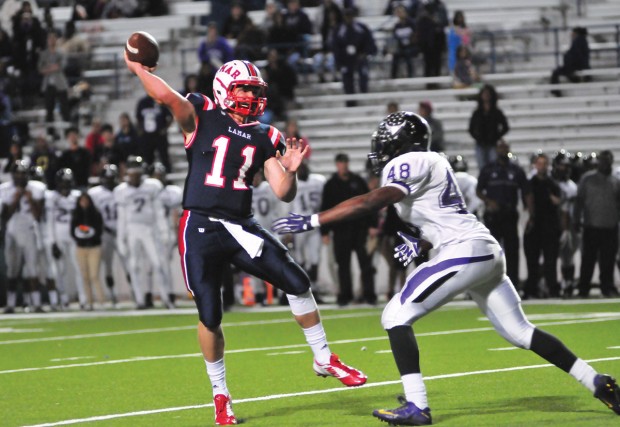 With the return of standout quarterback Owen Holt, the Lamar Texans should again be among the area’s top Class 6A football teams.

After advancing to the third round of the Class 6A playoffs last season, the Lamar Texans are again poised for another deep post-season run. With 16 returning starters, including nine Division 1 collegiate recruits, the perennial powerhouse should again rank among elite teams in the Greater Houston area.

Leading the way for Lamar is senior quarterback Owen Holt. “He’s the leader of our team,” said Texans head coach Tom Nolen. “Owen is the guy that makes things happen for us on offense. He’s also already committed to Harvard University, so his academics are obviously outstanding.”

Among highly touted defensive linemen, it doesn’t get any better than Episcopal Knights sensation Marvin Wilson. The 6’5”, 320-pound senior is the nation’s No. 1 overall high school football recruit. “Besides great speed for a guy his size, Marvin has an amazing ability to get off the ball. He’s extremely quick with great hands,” said Episcopal head football coach Steve Leisz.

If all that weren’t enough, the Knights also boast the nation’s 24th overall top prospect in 6’7”, 305-pound offensive lineman Walker Little. “Walker has incredible footwork for a guy his size,” said Leisz. “There’s only five so-called five-star prospects in all of Texas, and we have two of them here at Episcopal with Marvin and Walker. It’s pretty incredible.”

But the talent level certainly isn’t restricted to the offensive and defensive lines. Running back Jake Levrier, who rushed for 31 touchdowns last year, is ranked among the top running backs in Greater Houston. Meanwhile, senior quarterback Gavin Geib, who played inside linebacker last year, brings tremendous athleticism to the Knights’ offense. “Not only is Gavin a great athlete, but he’s also tremendously smart. Off the field, Gavin’s battling for the top spot in his senior class. He’s already committed to play at Penn next year, which says a lot.”

In addition, junior receiver Jaylen Waddle already has multiple collegiate offers from the likes of Ole Miss, Florida State, UH, Texas Tech and TCU. Back on defense, standout senior linebacker Camden Miller is a driving force for the Knights. 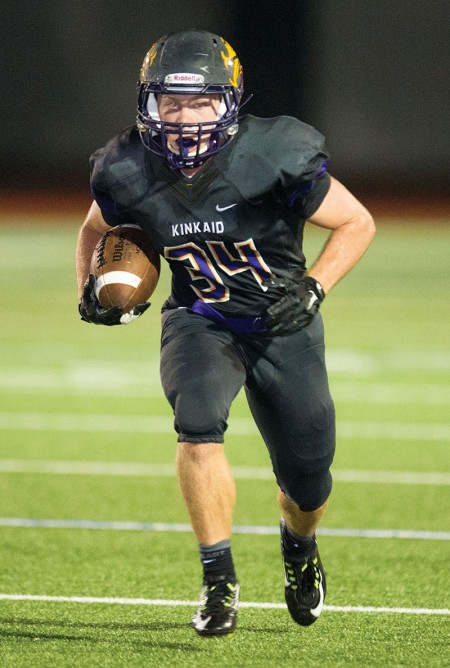 Senior wide receiver Ford Young is among a crop of talented starters returning to the Kinkaid Falcons lineup this season. (Photo: davidshuttsphotography.com)

The team that upset Episcopal in the last season’s SPC Championship game was the Kinkaid Falcons, and with a load of talented players returning, Kinkaid should again be in the championship hunt. Kinkaid will be especially strong at running back, with the return of junior Johnathon Thomas. “Johnathon is one of those difference makers,” said Kinkaid head coach Nathan Larned. “After coming back from an injury last season, he averaged over 200 all-purpose yards a game. We’re also expecting good things from sophomore running back Josh Williams.”

On the offensive line, Ben Padon is a high-academic player getting looks by Ivy League schools while wide receiver Ford Young is being recruited by MIT. The big hole the Falcons will have to fill is at quarterback, with the departure of Michael Goldak. Senior Matthew Maggi, junior Jack Nevil and sophomore Zach Daniel are all battling for the starter’s role.

The Falcons’ defense could very well be its strength with the return of several key starters, including junior linebacker Marquis Hubbard and senior linebacker Pierce Johnson. “Marquis is also a great student,” said Larned. “The Ivy League schools will be swarming to get him.”

Youth is well represented for the Falcons in up-and-coming  6’2”, 300-pound sophomore defensive tackle Ameer Mustafa and  6’2”, 225-pound sophomore linebacker Kamal Nader. Also back for the Falcons is junior kicker Hayden Rome, who amazingly enough was successful on 12 of 21 of the Falcons’ onside kicks last year.  “Ameer and Kamal are extremely talented and athletic sophomores, while Hayden is really tearing it up at the summer football camps,” said Larned.