Village Administration Rolls Out the Red Carpet for Student Athletes 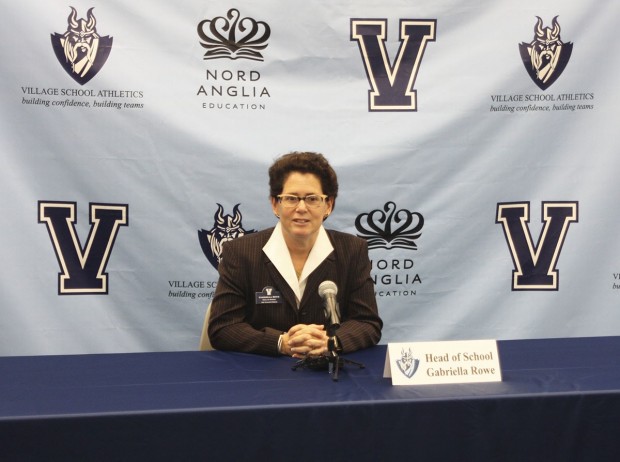 Similar to all other schools, The Village School’s fall sport teams, (Volleyball, Football and Cross Country) started preparing for the 2016-17 competition season on Aug. 1.  What makes this sports season different from all others is that Village held its first ever Viking Media Day. After school ended, all of the fall athletes made their way to the gym, which was full of Viking spirit, game-time radio and food. But, the key difference was that after the team photos, The Village School Athletics program hosted its first press conference for its coaches and student athletes.

Village’s press conference could be called a mock press conference, but it prepares the athletes for what they might experience later in life. Village alum Isaiah Taylor played for The University of Texas Men’s basketball team and recently took a partially-guaranteed three-year deal for the Houston Rockets. In his college career, Taylor participated in multiple press conferences and will most likely attend many more. Preparing students for their potential future was the main idea behind this event.

“We wanted to host a special event for the kids. They have worked so hard and deserve the red carpet rollout, especially this year,” said Nick Petito, Sports Information Director. “As we move from TAAPS 4A to TAAPS 6A, we want our student athletes to know that we fully support them. We also want to celebrate the two team and three individual state championships over the last three years.”

The Village School hopes all of their athletes will succeed in their sport of choice and wants to prepare them for their future, while still in high school.

“Athletics is not only an experience for those who are participating, but it is also the glue that binds together our greater community,” said Gabriella Rowe, Head of School. “The impact of athletics on our students is not just for our student athletes, but for our whole community. In that way, we are able to give them the experience of being apart of something greater than themselves, which is probably the greatest impact that you can have on a child.”