A Review of Emery's Football Season, So Far 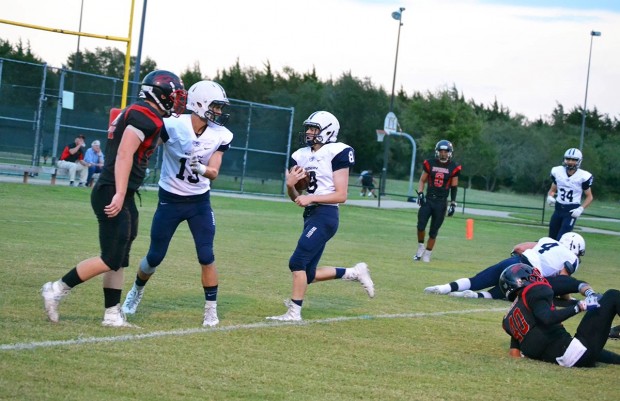 #34 Jake Plantowsky and #13 Michael Ran watch as #8 Grant Schneider strolls into the end-zone.

Coach Adrian Adams and the (4-1) Emery Jaguars are coming off of their bye week this past weekend. The Jaguars hold a three-game winning streak and a MaxPreps National Rank of 16. The Jaguars look to be rolling at the midway point in their season.

Senior quarterback David Kleban continues to add to his exceptional junior campaign. Through five games this season, Kleban has thrown for 1,159 yards, 24 touchdowns and 0 interceptions while completing 64 percent of his passes and holds a QBR of 135.5. Freshman backup quarterback Ben White has also contributed 59 yards and a touchdown through the air this season.

Senior Lewis Graubart and Michael Talisman and junior Ciro Savarese anchor the Jaguar defensive front. They have combined for 101 tackles and 7 tackles for losses and 2 sacks. Sophomores Ethan Williams, Ethan Samuel, Simon Gerst and Josh Strauss also have contributed to the success of the Jaguar defense. The last line of defense is the two senior defensive backs Michael Ran and Grant Schneider, who have combined for 7 interceptions.

The newest addition to the Jaguar football team is senior kicker Jacob Levin. Levin has converted on 26 of 31 on PATs and is 1 for 2 from field goal range with a 33-yard field goal. He has also had three successful onside kicks which were recovered and all resulted in Emery touchdowns.

The (4-1) Jaguars will return to action as they play host to the (5-0) Waco Vanguard Vikings at Caress Stadium this Sat., Oct. 8, 3:30 pm. The last meeting between these two teams came in November of last year in the First Round of TAPPS Six-Man Division I Playoffs where the Jaguars prevailed 61-16. If you can’t make it out to Caress Stadium on Oct. 8, there will be a free live stream at thecube.com.