Holiday travel with the family 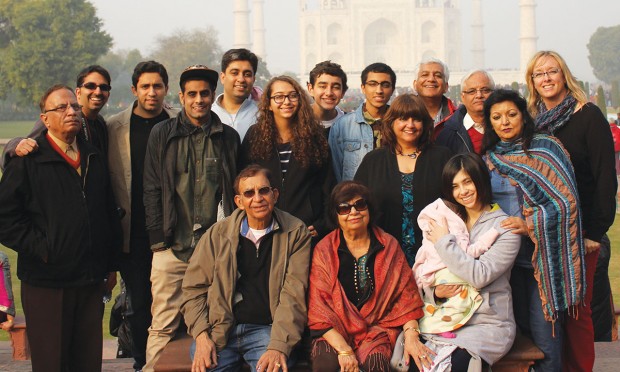 Going to great lengths to be with loved ones over the holidays is a time-honored tradition – but some people go much further than others.

Take the Seth family, who packed up the kids and the parents and headed to India. The Matta family don’t have to go quite as far, but their native Puerto Rico is a quite bit further than the “over the hills and through the woods” of holiday lore.

When Holly Thankful married Sandeep Seth, she knew that travel would be a part of life. The couple had taken their two children – daughter Hasanthi and son Vikram, now 22 and 18, respectively – to India several times to get to know their father’s native land and their Far East family.

Still, the holidays of 2012 marked a watershed when the entire Seth clan of Texas decided to coordinate a trip together to celebrate the 50th wedding anniversary of Prithvi and Kanta Seth, Sandeep’s parents.

It was important to Prithvi and Kanta to have their grandchildren visit the place where they grew up, see their culture first-hand and visit family they had never met, said Holly. “Instead of a big party, they wanted a family trip that all the kids could remember their entire lives. It would be everyone’s Christmas gift to each other.”

The trip turned out to be epic.

Besides Sandeep and his family, there was his brother Vineet and his wife, Sarah, who live in San Antonio. They had a young daughter of 9 months. There was Anita, his sister, with her two college-age boys, who live in Katy. And there were Sandeep’s parents, who live in Alief.

“Even though we’d been there before, we hadn’t done the usual touristy things,” said Holly. “We were always visiting family. This time we wanted to hit the major tourist attractions, to see the sights that come to mind when you think of India.”

Together, with family in India, the group grew to 25, so they rented a whole bus to do the Golden Triangle: Delhi, Agra and Jaipur.

Home base was a big empty house owned by a relative in New Delhi. From there the group saw Delhi and headed off to Agra to see the famed Taj Mahal, and on to the “Pink City” of Jaipur. In 1876 the buildings were painted a deep pink to prepare for a visit of Prince Albert.

The family spent Christmas – and Vikram’s birthday – at the Taj Mahal, making it the most majestic birthday of his young life. In Jaipur, they saw the Amber Fort, City Palace and the Jantar Mantar Observatory, and celebrated New Year’s Eve. “We wanted to have a celebration for my in-laws’ anniversary,” said Holly, “so we ended up taking over the hotel’s New Year’s Eve party and made it our own.” The celebration was like a standard New Year’s in Houston: a live band, dancing, dinner, champagne and countdown.

“For my kids, the most important aspect was to spend time with their cousins. As they get older and go off to college or their careers they won’t have a chance like that.”

The family spent about a week in Delhi, taking in the Akshardham and Laxminarayan temples; Indira Gandhi’s house; Qutub Minar, the world’s tallest brick minaret; the Red Fort Complex, named for its massive red sandstone walls; and Chandni Chowk, one of the oldest and busiest markets in Old Delhi, dating to the 1600s.

Delhi is fascinating but it’s a northern city, and temperatures can drop near freezing in the winter.  “Most homes don’t have central heating in India, so at night, you’re always huddled around a little space heater and sleeping with five blankets,” said Holly. “Being spoiled to Houston weather, we would freeze all night till the sun came up and then warm up a bit.”

So the family made an impromptu decision and headed south to the port city of Kochi, on the Arabian Sea in the state of Kerala. Kochi is famous for not only its beaches but also its backwater wilderness of canals, rivers and traditional hamlets, and a tradition of houseboat rental has sprung up to give visitors the opportunity to explore. The Seth family rented one, hired a cook, and set off for the time of their lives. “The kids loved it. It’s an adventure totally different from anything we’ve done before.”

From there they went to the resort town of Kovalam, reminiscent of beach towns of Mexico, with little restaurants and hotels on coconut palm-lined beaches of the Arabian Sea. The kids played on the beach and swam in the pool. Then it was back to Delhi for four more days – a full week in the Indian capital, sightseeing and spending time with family.

“It was very eye-opening for the teenagers in terms of how the rest of the world lives,” Holly said. Her son, especially, was sensitive to the class differences.

“The big house where we stayed has a house boy, and he’s only 13 or 14,” Holly said. “He doesn’t go to school; his job is to cook, clean and keep the house, and that’s going to be his job his whole life. My son was the same age at the time we visited. For him to see something like that – he was saying, ‘Oh, he’s my age and he works for a living. He’s not going to have the chance to go to college – he’s not going to have nice clothes or an iPhone.’ It’s a huge lesson in how lucky we are.” 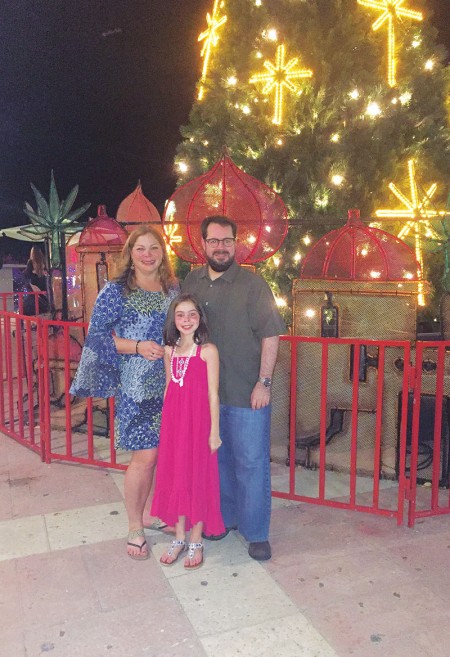 FAMILY TIME Gisselle, Eduardo and daughter Elena Matta travel to Puerto Rico or another vacation destination with their extended family every winter holiday.

The Mattas – Gisselle, Eduardo and daughter Elena, now 9 – have traveled to Puerto Rico, the island of their birthplace, for three of the past four winter holidays. They’ve gone together before, but as Gisselle said, “When you’re home for the holidays, you spend a lot of time visiting extended family, rather than visiting new places.”

So in 2012, they decided to change that. Instead of staying in the metropolitan area, where their extended family lives, they rented a large house with some friends and family on the opposite side of the island. They celebrated Christmas at home in Bellaire, and then headed off to the island, where all of them, including those who live on the island, headed off to Cabo Rojo.

The trip was the beginning of a new tradition: spending the holidays together. The next year, one of her nieces in Puerto Rico wanted to join friends on a ski trip in Vail, so they rented apartments in the snowy resort town and tagged along. The next two years it was back to the island. This holiday they’re planning another sojourn out West – this time to Arizona, where Eduardo’s brother moved recently.

Now with four New Year’s holidays behind them, they’ve developed a routine when headed to the island: They fly into San Juan on a red eye and arrive early in the morning. They spend that first day visiting extended family, and then head off to a more remote location. In 2012, when they rented a house in Cabo Rojo, everyone stayed in the same house. They took the kids kayaking, stand-up paddling, to the beach, the nearby lighthouse, and to the Mayagüez Zoo.

In 2014, they went to the east coast of the island: Palmas del Mar, in Humacao. One family’s parents already had a house at the resort, and they rented another house to be near each other.” They rented golf carts, quickly commandeered by the teenagers.  Gisselle enjoyed runs on the beach. On New Year’s they ushered in 2015 at the Beach Bohio, a tiny restaurant. They all lined up to see the fireworks over the ocean.

Last year they circled back to Cabo Rojo, but this time they rented a couple of apartments. Eduardo’s sister and her husband have a boat so they took advantage of that to navigate to different beaches around the area. They went to the beach of Boquerón and to Desecheo Island, a small, uninhabited island off the northwest coast, listed as a wildlife refuge. Desecheo was previously used by the U.S. Army during World War II as a test-bombing range, and later used by the U.S. Air Force for survival training. The public is not allowed to set foot on the island, but the nearby reef is popular for diving and snorkeling. They also explored the little villages in the mountains, where country restaurants serve traditional Puerto Rican food. The family welcomed 2016 in La Parguera, a small fishing village in the town of Lajas.

The Mattas think of the trips as the gift that keeps on giving. “Elena is 9 now, and she has learned to appreciate the trip more than a toy that she may get tired of,” said Gisselle. “We try to learn about the place where we are going, and help the kids ask relevant questions, help them think outside the box. Sometimes the experience is more enriching than a nice gift.”