When that holiday task is a treat 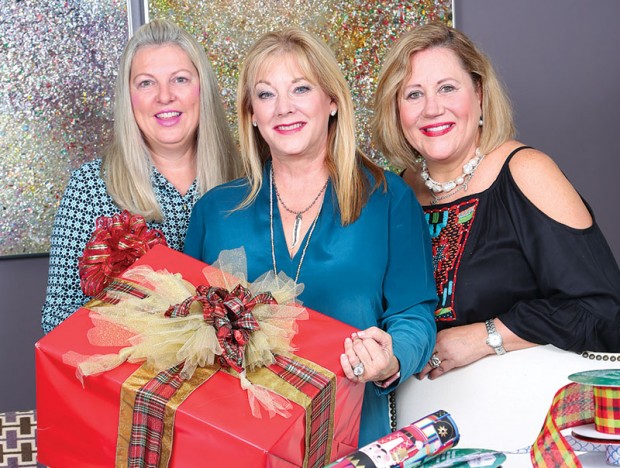 WRAPPING WITH FRIENDS Each Christmas, Gaylon Gullquist, Wendy Burks and Sissi Easterling (from left) get together for Wendy’s “Wrappan Happen” to wrap gifts and catch up with friends. (Photo: lawellphoto.com)

They say you should never judge a book by its cover. But how about a Christmas present? For years, Barbara Kimzey carefully wrapped and labeled her family’s gifts to lie in wait until the unwrapping frenzy of Christmas morning. “We celebrate with a lot of fanfare,” the travel agent and math tutor says, “including decorating a 13-foot live Christmas tree with hundreds of lights and ornaments. The packages are put under the tree to make a total tempting sight.”

But at some point, Barbara realized the sight was a bit too tempting for her then-teenaged children. Someone had been “previewing” the presents.

“They were very good,” she says of her three now-grown children, two boys and a girl. “I knew one of them was opening the presents. So I decided I’d catch whoever the little goblin was.”

That year, instead of labeling gifts with names, Barbara numbered each one. “I listed the numbered gifts with names on my master list,” she says. “I thought this well-thought-out idea would resolve the [problem of the] snooping early peeker. But on Christmas morning, I could not find the master list with the numbers and names!

“I thought I had it in a drawer in the kitchen. I just knew I had a secret spot, but I just had to give up because it was time to open presents. We turned it into a pass-around. Guess who the present was for! There was a lot of giggling.” She never did find the list. “I thought I was being so clever, but it turned out the trick was on me. I don’t recommend it.

“Even though we don’t always sit around the same tree anymore, they still talk about this crazy Christmas surprise.”

Wendy Burks has turned wrapping Christmas gifts into an annual get-together. Each year, she hosts a “Wrappan Happen” for friends, where she supplies the house, the wrapping paper and the food, and everyone brings their own gifts to wrap.

“I started it when my boys were little [they’re now a sophomore at Ole Miss and a senior at Lamar High School],” says Wendy, who owns Big Data Energy Services with her husband. “My neighbor said her sister did a wrapping party and we should do it. So we started with neighborhood moms when the kids were little, and you’d have presents all over the house.”

The moms would convene at night, all wearing PJs. “The first time we did it, there were probably six or seven of us there who all lived in a four-block radius. We were there so long, we looked at the clock and it was 4 a.m.!”

That get-together turned into a fundraising sign-up party at Mark Twain Elementary when Wendy’s boys were students there. “And then we moved, and I found all this wrapping paper in my attic,” Wendy says. That revelation – some 14 years ago – was the spark of an idea, and today Wendy hosts up to 150 women each year at her annual party.

“People come and go all day long, starting at noon and ending around midnight,” Wendy says.  “I provide ribbon, wrapping paper, tape, scissors and tags. I buy most of the ribbon at Sam’s, and the best paper at good prices is at Hobby Lobby. I also always make sure I have Hanukkah paper for my Hanukkah friends.”

To make it a party, Wendy hires a bartender and someone to serve finger sandwiches, cheese and dips. “I do make everything, and I’m not a very good cook,” she says. “People don’t want a whole plate, just something to pick up and eat. One year I did soup, and that didn’t go over very well. I just always make sure I have protein because people are drinking.

“As you get older, you have different friend groups. Some are really serious about wrapping, and some might come and help other people wrap. The group changes year to year, and a fun thing is that now the moms will bring their daughters who are home from college.

“Now that the kids are bigger, the gifts are smaller and fewer. There’s a lot more wrapping paper left over now.”

Wendy also has added a charitable facet to her party. “Last year everybody brought a Toys for Tots toy,” she says. “This year it’s Beanie Babies for orphaned children in Guatemala. I put it on the Evite. It feels like I’m doing a little something good.

“This is my favorite thing all year!”